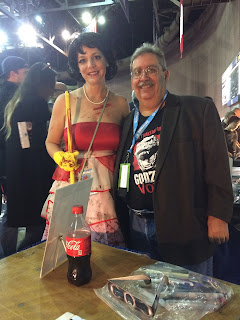 Bloggy Tony and Sainted Wife Barb are in Pensacola, Florida for the second day of the award-deserving Pensacon 2017, which took place Friday through Sunday, February 17-19. Barb took Tony’s photo with a Lady Killer cosplayer. Which Tony couldn’t find yesterday, but is pleased to post today. Sometime after that, Tony and Barb went back to the Grand Hotel for Tony’s second Saturday panel...

“Civil Rights and Social Justice as Reflected in Comic Books” was a presentation by Thomas Strange with fellow Longbox podcasters Mike Manning, Joshua Opper and Thomas Boucher...and yours truly as the withered voice of experience. The panel was scheduled from 4 to 4:45 pm in the Grand Hotel Ballroom. The description:

Explore how artists and writers reflect Civil Rights in comic books. From the early portrayal of African Americans in comics to other social issues such as: women's rights, the LGBTQQAI community, and the representation of disabled persons.

This is a subject of keen interest to both Strange and myself. He  received his BA in History at San Francisco State University with a special emphasis on how history is reflected in pop culture. He’s currently working on a book tentatively titled, “Civil Rights and Social Justice Movements as Reflected in Comic Books.”

Strange, who is white, cosplayed original look Luke Cage during the panel. The look was humorous and unsettling, which I’m thinking may have been his point. 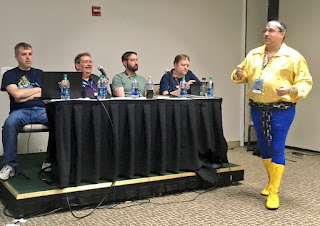 We had a great crowd for the panel. Because I couldn’t take notes while participating on the panel - I really need to get someone to do that for me in the future - I can only share a couple comments I made during it.

Comic books, especially super-hero comic books, have always dealt with social justice. In his earliest appearances, Superman took on crooked politicians and avaricious millionaires as often as he did more typical criminals. The Justice Society of America bought food to European citizens fighting the Nazis and did a special story on respecting handicapped Americans. Even the sanitized comic books of the 1960s carried public service announcements that today’s insane right wing would doubtless consider subversive. Those are the same idiots who think “social justice warrior” is an insult. For me and others, it’s a label we wear with pride.

I believe the best super-hero comic books are those that touch on reality. I can guarantee you will find that sensibility in many of the comics I’ve written in the past and most of the comics I’ll be writing in the future.

After the panel, Barb and I went back to the Pensacola Bay Center and stayed at my Artists Alley table until the show floor closed at 6 pm. Last year, I did a bunch of really bad Godzilla sketches for the fans. I only did a few of them this year, but I did one that I liked well enough to draw a second time to share with the readers of my bloggy thing: 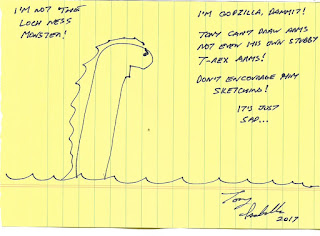 Barb and I decided to skip the official Pensacon party and hang out on South Palafox Street, which has lots of cool bars, restaurants and shops. Our first stop was Beef O’Brady’s, which had a Suicide Squad theme going for it.

Digression. Several bars and restaurants adopted pop culture themes to celebrate Pensacon. “Hogwarts School of Witchcraft and Wizardry” was the theme of the Fish House. Others included...

At Beef O’Brady’s, Barb had a very nice garden salad and we shared a bucket of delicious boneless chicken wings. We also continued our “Bar rescue” imbibing of signature drinks. In honor of my pal Mike W. Barr, I had “The Katana,” which was a really strong green drink. I’m not sure why it was green, but my guess is that it was straight vodka with food coloring. Barb ordered the “Enchantress Martini,” but after downing my Katana, I couldn’t remember what her drink was like. Truly I am a lightweight.

After Beef O’Brady’s, we strolled South Palafox and stopped at some shops on our way to the Saenger Theatre and the Pensacon Costume Competition. James Leary of Buffy the Vampire Slayer fame was the master of ceremonies. He was entertaining, the costumes were really terrific and the chairs were so comfortable that we realized we’d fall asleep if we stayed there for the entire event.

Barb and I used to watch The X-Files every week. That was unusual because horror and science fiction isn’t really Barb’s thing. But she loved Mulder and Scully, so we knew we wanted to check out the Tin Cow and its X-Files theme.

The X-Files theme wasn’t all that prevalent at the Tin Cow, but it was a nice place with great service. We shared a basket of fries. We ordered signature drinks. Barb had a spiked milkshake that was very chocolatey. I had a mango mimosa. Barb’s drink was incredible. Mine was good, but not spectacular.

The Pensacon Transportation Team got us back to the hotel and one of the more amusing moments of the weekend. You see, the previous night, past midnight, the hotel room next door to ours was really loud and boisterous. Which is something that happens when you stay at a convention’s host hotel. No biggie.

We took the elevator to our floor. Also in the elevator, a group of Victorian Era cosplayers. They were discussing how crazy that got the night before. They got off at the same floor as us. We walked down the hallway behind them. While they fumbled with their keys, we opened the door to our room.

The youngsters - hey, everyone is younger than me these days - were embarrassed and began to apologize profusely for the noise they’d made the previous night. I assured them it was not a problem. This was not my first convention. Heck, I’ve attended so many cons that I couldn’t tell you how many if my life depended on it.

It was a nice end to our Saturday. Come back tomorrow for our Pensacon Sunday and the conclusion of this convention report.