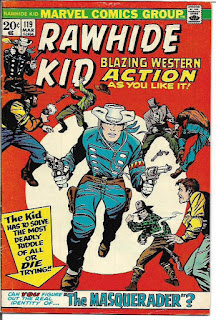 The Rawhide Kid is my favorite western comics character and one of my favorite comics characters period.  Something about the short of stature (but big on courage and fighting skills) Johnny Clay spoke to the short of stature (but big on comics-reading skills) teenage Tony Isabella.  After rereading the Kid’s earliest adventures when Marvel Comics reprinted them in a pair of Marvel Masterworks and an Essential Rawhide Kid volume, I wanted to reacquire every Rawhide Kid comic, reread them and write about them in this bloggy thing of mine. This is the 106th installment in that series.

The Rawhide Kid #119 [March 1974] was an all-reprint issue, which would be the case for all the remaining issues on the title’s run. I don’t recall mentioning this last week, but, as of the previous issue, the title dropped from monthly to bimonthly.

The cover is a reprint of the cover of Rawhide Kid #49 [December 1965] with new coloring and the blurb “Blazing Western Action as You Like It!” replacing some cover copy from the original version. Larry Lieber penciled and inked the main figure of the Rawhide Kid. The background figures are taken from an interior page of the lead story, pencilled by Lieber and inked by Carl Hubbell. 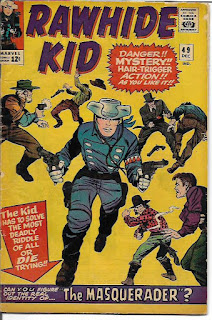 “The Menacing Masquerader!” (17 pages) was written and pencilled by Lieber with inks by Hubbell. It was reprinted from issue #49. You can read my comments on the story here.

This issue’s Marvel Bullpen Bulletins page leads with a Stan Lee’s Soapbox season’s greetings poem by the Man. The second item totes the debut of a second “bonus” Bullpen page so that the Marvel gang can share even more stuff with its readers.

Item three is a head shot of the unnamed Iron Fist with a message in the Spider-Man Code from FOOM (Friends of Old Marvel). The coded note reads:

The fourth item was about Marvel creators attending conventions: Roy Thomas in New Orleans, Marv Wolfman and Len Wein in Toronto, me in my native Cleveland, Mike Friedrich and Neal Adams in San Diego, and Barry Smith in Detroit.

The fifth item: Marvel creators on the move. Steve Englehart moved to San Francisco. Mike Friedrich was already there. Jim Starlin was riding Steve’s new motorcycle to the city. Said to be joining them soon were Frank Brunner and Gary Friedrich.

Daredevil had moved to San Francisco a while back, but, in the next item, we learned he would be returning to New York for some issues. The Bullpen Bulletins writer chalked this up to writer Steve Gerber and artist Bob Brown living in New York.

The final item: a crossover between Tomb of Dracula and Werewolf by Night. The title are said to be two of Marvel’s biggest hits.

The “Bullpen Bonus Page” turned out to be not nearly as impressive as advertised. The top half of the page was an announcement of the incredibly stupid “Marvel Value Stamps” promotion which resulted in the ruination of countless comic books of this era. I don’t know of anyone in the offices who thought this was a good idea, but, then again, this clusterfuck of a promotion wasn’t the sort of thing one would discuss in polite office company.

Most of the bottom half of the page was a come-on for the FOOM fan club. The cost to join was $2.50. New York residents also had to pay sales tax. Canadian and other foreign orders added 75 cents to the bill.

Rounding out the ish was a three-page Kid Colt story reprinted from Kid Colt Outlaw #107. “The Boy Who Was Afraid!” Written by Stan Lee with artist Jack Keller, the tale shows Kid Colt at the tender age of 16. He’s proudly wearing his first six-shooter as he walks down the streets of his town. This is before “he became a living legend” and an outlaw.

Local bully Hogan takes dick-ish offense to the sight of a little boy “walking around with all that hardware.” Colt tells him that’s none of his business. Hogan takes this as an insult and prepares to draw down on the teenager.

Colt says he doesn’t want to draw against Hogan. Hogan says the lad can stop this by admitting he’s afraid. Which Colt does.

Hogan says he knew Colt was “yella.” He won’t shoot him, but he’ll muss him up a little just for fun. Our young hero has a change of heart:

Stay back. Hogan! I realize now that I’ve got to stop you! Hombres like you think yuh can walk all over anyone smaller or weaker.

It appears Kid Colt wasn’t afraid of being shot. He shows Hogan his lightning draw. Hogan tries to draw on the Kid, but Colt shoots the holster off the bully’s belt and the smelly cigar out of his mouth. You see, Colt was afraid of hurting Hogan.

Hogan decides against picking up his gun. He rides out of town and vows he’s through with fighting forever. The townspeople are amazed and impressed:

TOWNSMAN #1: If Colt can use a gun like that when he’s sixteen, just imagine when he’s a man!

TOWNSMAN #2: Mark my words, boys! Folks’ll be hearin’ about that hombre someday.

TOWNSMAN #3: They shore will! 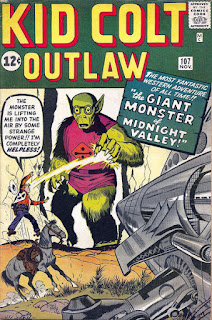 Of course, this short story was overshadowed by the cover story of Kid Colt Outlaw #107: “The Giant Monster of Midnight Valley!” That Lee/Keller adventure had Kid Colt meeting and then helping a giant alien being whose ship had crashed in the Old West. The wild tale was reprinted in The Mighty Marvel Western #3 [February 1969] and in Kid Colt Outlaw #180 [March 1974].

That’s all for today, my friends. The Menacing Masquerader returns in next week’s edition of “Rawhide Kid Wednesday.” But I’ll be back tomorrow with the first of two bloggy things “celebrating” Easter-themed horror movies. See you then.

Posted by Tony Isabella at 6:46 AM