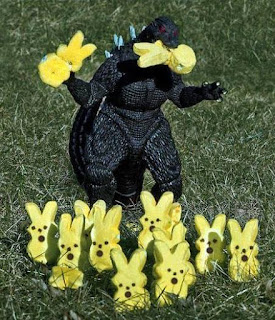 The First Church of Godzilla celebrates the Great Scaly One who protects us from monsters, alien invaders and Man's own folly with his fiery atomic love. The Church respects all other faiths because Christian or atheist, Muslim or Jew, all people sound pretty much the same as they are crushed in his righteous path.

As the pastor of the First Church of Godzilla on Facebook, I extend Easter greetings to those among my readers who celebrate this day. Whether you celebrate the resurrection of Jesus Christ or consume your way into a candy coma, we hope you have a day filled with joy and sweet treats.

I was raised a Roman Catholic, but became a lapsed Catholic in my late teens. I left the church of my birth family entirely when I found I could no longer stomach its vile bigotry towards gays, its discrimination against women and, especially, its countenance of its priests molesting children and others and its attempts to cover up those crimes. It’s unlikely I will ever come back to the church. The church needs to come back to me.

I believe there are valid lessons to be learned from The Bible, but  don’t consider it or the books of other religions to be holy books. They were all written by human beings and so reflect the agendas of those human beings. At best, these books are “alternate facts” and, at worst, propaganda designed to get other human beings to follow the dictates of a few.

Do I consider myself an atheist? Not really. I believe in good and evil. I believe good is preferable to evil and have faith that, in time, it can and will triumph over evil. You can certainly put a name on “good” if you like, but I think you should make sure that it is, indeed, “good.”

Which brings me to the main subject of today’s message...

People who called themselves “Christians” and yet voted for Donald Trump and other Republicans. There’s a serious disconnect there and I think it can be shown by asking the simple question “Christians” are called upon to ask themselves:

What would Jesus do?

Do you think Jesus would use the “me, me, and only me, screw you” philosophy of Ayn Rand as a template for governing?

Do you think Jesus would work to destroy health care to give huge tax cuts to the already wealthy?

Do you think Jesus would discriminate against gays and minorities?

Do you think Jesus would work to disenfranchise voters unlikely to vote for his political party?

Do you think Jesus would strip programs vital to the poorest among us to build up the already largest military in the world and, yes, give tax breaks to our most obscenely wealthy citizens?

Do you think Jesus would have white supremacists among his trusted advisors and thus empower such racists?

Do you think Jesus would choose cabinet department heads who clearly want to destroy the departments they run?

I could continue with these kinds of questions for a thousand words and not cover all the disconnects between your so-called “Christian” faith and what Jesus would do.

So I’ll end this with an observation. If you think Jesus would do any of the above, then I submit it is not Jesus you’re worshiping on this day.
It’s the other guy.

Posted by Tony Isabella at 4:10 AM