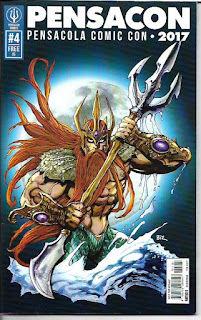 Pensacon 2017 took place Friday through Sunday, February 17-19, in Pensacola, Florida. Bloggy Tony and Sainted Wife Barb flew to that really nice city for the convention. They have already met several nice people and enjoyed a nice dinner at the Union Public House. I may well exhaust a month’s worth of the word “nice” as I continue this report on the convention.

Barb and I started our Friday with breakfast at the Grand Hotel’s 1912 restaurant. It’s a decent enough eatery, but nothing to make plans around. That’s much the case with all the 1912 restaurants in the chain. Okay in a pinch or when you’re too tired to go anywhere else. Just the same, I was annoyed to see the restaurant’s hours of operation were not geared to the convention. No reflection on the great Pensacon, but I’m weary of hotels who don’t realize the fans spend money just like the rest of their clientele. This is pretty much the only negativity you’ll get from me during this five-part convention report.

Pensacon opened to the public at 1 pm afternoon. The con’s artists alley was on the upper level of the Pensacola Bay Center. From that level you could look down on the main floor of the center, which is where the vendors and some guests were located.

My table was in a great spot. Legendary artist Jose Delbo and his lovely family were to my right while Barry Gregory, the writer and publisher of the cool John Aman Amazing Man title, was to my left. As always, Pensacon volunteers were around to assist us and bring us drinks and snacks.

Other guests in close proximity were the effervescent Rodney Ramos,  Kelly Yates, Mark Maddox, Guy Gilchrist and Pat Broderick. Keeping an eye out for us was volunteer crew leader Jonathan Jones, one of the nicest guys you’ll ever meet. It was a bit chilly up there in artists alley and, when Jonathan learned Jose, his family, Barb and I were uncomfortable, he showed up the next morning with a pair of space heaters from his own house. 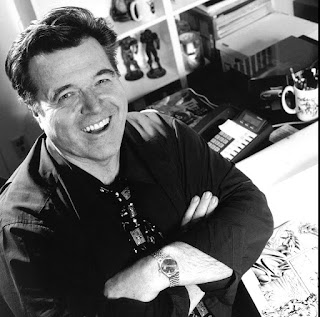 Since Barb and I had some time before the fans came into the show, I took her down the main floor to introduce her to Neal Adams, one of the men and talents I admire most in the comics industry. He’s one of the best comics artist of all time, of course, but he’s also a tireless defender for creators rights. Neal has made conditions and contracts better for so many creators by advising them and by sticking to his own guns when negotiating his contracts. There are people in my life who, when I think about them, I realize they made me smarter. Neal is one of those people. It’s why I have taken to greeting him as “Sensei” when I see him at conventions. He’s been a good friend and a good teacher to countless comics professionals over the years.

My first panel of the weekend was “Classic Movie Monsters” at the Grand Ballroom Room B in the Grand Hotel. Pensacon’s transportation team got me there for the event. These hardworking volunteers were always available to take convention guests wherever they needed or wanted to go. I can’t say enough good things about them. 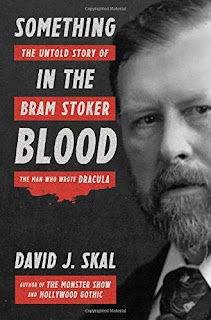 Everyone on the “Classic Movie Monsters” panel was a whole lot more knowledgeable about the topic than I am. I’m not a movie historian. I’m more comfortable talking about the movies and the monsters than the details of the movies and monsters. Fortunately, the panelists  including David J. Skal - author and documentary filmmaker - and my pal Mark Maddox, an award-winning artist. Skal’s Something in the Blood: The Untold Story of Bram Stoker is in my Kindle waiting to be read. Later this year, Maddox and I will be teaming up for some panels at G-Fest, the legendary Chicago event celebrating Godzilla and all things kaiju.

Thinking of and talking about the classic movie monsters gave me a great appreciation of the Frankenstein Monster and the Wolf Man, as well as an understanding of why I like those characters better than so many others. Neither character sought their fates. Like so many of us in these scary times for Americans who aren’t rich and white, they are caught up in situations not of their making. I can relate to their feelings of alienation and hopelessness, even as I and so many strive to oppose real-life monsters like Donald Trump, Steve Bannon, Paul Ryan and others. Yeah, I got political there and it’s not going to be the only time.

Back in Artists Alley, I met all sorts of terrific fans. I need to give a shout out to John Cook, a friend of original Black Lightning artist Trevor Von Eeden, for Trevor’s contact information. Trevor and I have reconnected, will be doing at least one convention appearance together, and are hoping to work together again. I think the fans would enjoy a comic-book reunion of the original Black Lightning team. Let’s see if any publishers feel the same.

There were lots of compliments on this bloggy thing of mine, which are always nice to hear. Claude and Pam Parish stopped by my table several times during the show and were always a delight. I also met the very cool Amanda (aka AJ Zipper) and we talked about diversity in comics, one of my favorite topics. Needless to say, Sainted Wife Barb charmed everyone who met her. Most were kind enough not to ask her what she was thinking when she married me.

The show floor closed at 8 pm. Barb and I were feeling pretty laid back. Instead of heading out to one of the many fine restaurants in the area, we walked to a nearby Whattaburger for our dinner. Which was actually pretty good on several levels. The walk was good for us. The food was good. Several cosplayers from the convention were eating there, which made the place feel comfy. Alas, Whattaburger has no signature alcoholic beverage, but I would play “Bar Rescue” on another Pensacola evening. 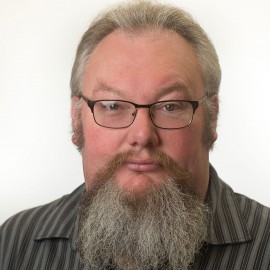 Back at the hotel, Barb and I decided to go to the con’s version of The Match Game. Hosted by Pensacon CEO Mike Ensley (shown above), the panelists included Carlos Alazraqui, Ming Chen of Kevin Smith’s View Askew Productions, James Leary of Buffy the Vampire Slayer fame, actor Hal Lubin, podcaster Mike Zapcic and artist/cosplayer Riki. It was a fun event, though not suitable for kids or work. Especially the latter. I mean, your boss would probably frown on seven strange (in a good way) people playing a game in your office.

Walking through the hotel lobby, we ran into the sensational Steve Scott, one of my favorite artists and people. There were some other people there, but, hey, it was past my bedtime. Even if I couldn’t remember who was there, each and every one of them was a fine human being and a credit to our planet.

Posted by Tony Isabella at 2:14 PM