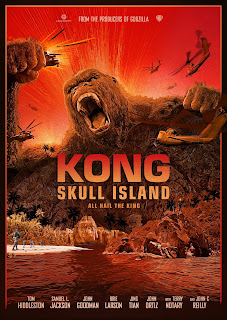 Kong: Skull Island was one of the highlights of last week for me. Giant monsters. Big screen. Exciting story. Terrific acting. This is my kind of movie all the way. Directed by Jordan Vogt-Roberts from a screenplay by Dan Gilroy, Max Borenstein and Derek Connolly and a story by John Gatins, this re-imagining of King Kong is set at the end of the Vietnam War and that is an inspired choice.

In the movie, the discovery of Skull Island was not possible until the invention and deployment of surveillance satellites in space. That the Russians also have such satellites gives the U.S. military and scientists reason to visit the island without knowing exactly what they’re getting into. Except scientist Bill Randa [played by John Goodman] who has a pretty good idea what awaits them on Skull Island. The other characters are at the mercy of Randa and Colonel Preston Packard [Samuel L. Jackson], another commanding figure who has his own reasons for accepting this mission and bringing along American soldiers who were one day away from going home.

Avoiding spoilers as much as possible...

Kong is impressive. His back story is powerful, ultimately making him one of the film’s most sympathetic characters. Also impressive are the island’s other creatures and the ever-present threat they post to the human characters.

The movie takes the time to introduce us to many of the scientists and soldiers who go to Skull Island. Some of the deaths come as a real shock, as do some of the survivals. Once the film takes us to the island, the story flows wonderfully. There are moments of sheer horrifying action and moments quiet, even reflective.

Sidebar. The make-up effects on the islanders are amazing. Worthy of Oscar nomination. Worthy of an Oscar win.

There are several outstanding performances. Tom Hiddleston’s jaded mercenary finds his true self on the island. Samuel L. Jackson is frightening as a man who finds his purpose only in war. Brie Larson is great as a feisty anti-war photographer.

The best performance? That would be John C. Reilly as a World War II pilot stranded on the island for decades. Even while serving to explain the inexplicable, he brings so much heart to his character. It’s a performance worthy of Oscar nomination.

There is a scene at the end of the credits. It’s great fun. Stick around to see it.

Kong: Skull Island is as fine a film as any I’ve seen in the past few years. I recommend it highly. 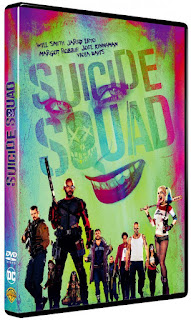 Suicide Squad (2016) is a terrible terrible movie. Which was pretty much what I expected. Friends whose opinions I respect didn’t care for it, which is putting it mildly. My son Eddie reacted in horror when I borrowed the film from our local library. But, like Man of Steel and Batman v Superman: Dawn of Justice, which I haven’t seen yet, it was a movie that I felt I should watch. I have a long list of movies like that. Sigh.

I’ll start with the very short list of things I liked about Suicide Squad. I liked Katana. I kind of liked Croc. I thought El Diablo’s tragedy and search for redemption was well played. I could kind of relate to Deadshot’s wanting to be a father to his daughter. Thus ends the short list.

I have always considered Amanda Waller to be one of the vilest of villains and she’s more vile than ever in this film. She scares the government into her “Suicide Squad” program telling them they need to protect themselves from the next Superman if the next Superman is a bad guy. However, the menace that threatens all mankind in the movie is a menace of Waller’s making. Oh, yeah, she also murders a room full of government workers because they don’t have the proper clearance to know about the debacle she created. If I’m Rick Flag, I pop a cap in her ass right then and there.

Flag is no hero either. He’s a mindless soldier who enters into an inappropriate relationship with a member of the Squad. His mistakes of action and judgment get people killed.

The Joker? Let me check. Yeah, I still hate this overused villain. Put him in the ground already. Forever.

In a scene that runs during the credits, Bruce Wayne helps Waller in exchange for information on the heroes who will presumably join the Justice League. He tells her to shut down the Suicide Squad or he and his friends will do it for her. Yes, please. And while you are at it, give the authorities and the press enough on Waller that she can be tried, convicted and tossed into a cell for the rest of her life. Unless, of course, Midway City is in a state that still has the death penalty.

Hey, when it comes to overused villains who keep getting away with their heinous crimes, I’m all for revving up Old Sparky. 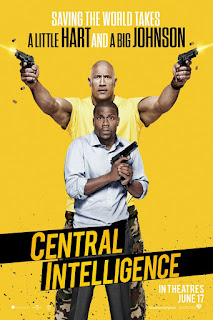 Central Intelligence (2016) was a Redbox rental. My daughter Kelly and I had wanted to watch it when it was available “On Demand” and missed that opportunity. Since she had bravely sat through Suicide Squad with me and since I was still feeling under the weather from a weekend of aches and pains, I was more than happy to watch this movie with her. Here’s the IMDb summary:

After he reconnects with an awkward pal from high school through Facebook, a mild-mannered accountant is lured into the world of international espionage.

Central Intelligence is your basic silly comedy-adventure movie. It works because its two stars - Dwayne Johnson as the awkward high-school friend turned buff CIA agent and Kevin Hart as the student of the year turned office drone - are just so darn likeable. Yes, the actors and their characters have annoying quirks, but you want to root for them. The comedy action scenes are fun. The character growth is mildly moving. There are solid supporting performances by Amy Ryan, Danielle Nicolet, Justin Bateman and Ryan Hansen. There’s even a surprising, very funny uncredited cameo near the end of the movie.

Central Intelligence isn’t an award-winner. It’s not a movie I’ll ever watch again. It was simply an amusing, entertaining, relaxing way to spend a little over an hour-and-a-half. Sometimes that’s all I need from a movie.

That’s all for today. I’ll be back tomorrow with a new installment of “Rawhide Kid Wednesday.” See you then.