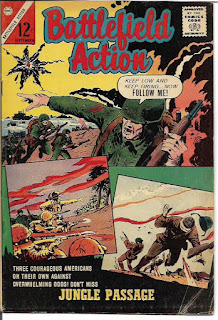 Welcome to the start of what I’m now considering “Volume Two” of my 136-part series on the comic books that arrived on the newsstands in July 1963. As I have explained in previous installments of this series, that month was pivotal to my own comic-book career because it was the month when Fantastic Four Annual #1 ignited my desire to write comics.

I’m thinking in terms of “Volume Two” because the previous columns in this series are, even as we speak, being collected in July 1963: A Pivotal Month in the Comic-Book Life of Tony Isabella Volume One. The previous columns have been rewritten as needed with all kind of new bonus material added to the mix. Keep watching the bloggy for ordering and release information.

We resume this series with Charlton’s Battlefield Action #49, dated September 1963. The Sam Glanzman cover consists of panels from one of the interior stories. This was a common cost-cutting practice of  Charlton, known for having the lowest rates and cheapest production values in the industry. Even so, their comics featured an amazing array of talents and are fondly remembered by myself and many other readers of the era. This issue and the other contemporary Charlton titles were edited by Pat Masulli.

The inside front cover of this issue offers a reward of $11,750 for the coin shown. The advertisement is from the Best Values Co. Coin Department. We’ve seen it in other comic books released this month. Charlton had the same low-rent paid ads as the other smaller comics publishers. The come on here was that you could buy the company’s coin catalog for a buck and use it to discover if you had any coins worth from $250 to $35,000.

That I know of, only one of the stories in this issue has ever been reprinted in the U.S. and that was in a Charlton comic from 1980. For that reason, I’m going to dispense with any “spoiler warnings” to give you a more complete look at this issue.

“Return to Siena” (6 pages) was the first story in this issue. It was drawn and signed by Charles Nicholas and Vince Alascia. If you were reading any Charlton anthology title, the odds were it would have at least one story drawn by this prolific team. The writer was almost certainly Joe Gill and I’ll tell you why I think that in a bit. Here’s the quick summation of this never-reprinted-that-I-can- see story.

It’s World War II. Lieutenant Bart Grey is clearing a tiny Italian village for the advancing U.S. Army. He doesn’t like that our side had to destroy the village to take out a German rear guard. Neither does his immediate superior, but both believe it was necessary. The story opens with Bart rescuing a pretty wounded Italian girl of no more than 15 or 16 years old. He’s hoping to get her to the medics in time to save her life.

At the medical station, the girl Maria tells Bart how the Germans came to her village twice and killed her parents. They become pen pals with Bart sending her letters as he fights his way through the war. His deeds are heroic, but he downplays them when he writes to her. When he is wounded severely enough to be sent home, he tells he’s being reassigned for being goofing off. His absurd modesty is a plot thread that’s never developed.

This is why I believe Gill wrote “Return to Siena.” The reportedly hard-drinking Gill wrote a lot of stories and he wrote them fast. With many of his scripts, I don't think he had much more than a general idea of what would happen in them and where they would end. He just seemed to go until he reached the allotted page length and then wrap things up quickly.

Bart returns to civilian life, but Siena is always on his mind. He and Maria have continued to correspond. He travels to Italy to see her. All the World War II action in this story is in flashbacks that he has while waiting for Maria in a restaurant. She shows up in the last panel, all grown up and as beautiful as ever. Bart says they have a lot of catching up to do.

Despite the abrupt ending, “Return to Siena” is an uncommonly sweet story. Not the usual blood-and-thunder war story normally published in Charlton war comics. I like it a lot.

“Minefield” (4 pages) was penciled and maybe inked by Bill Monlo, another Charlton regular. It may have been written by Joe Gill, but it is not one of his better efforts.

Several American soldiers are trapped in a ravine, surrounded by a division of German troops. The one path of escape open to them is through a minefield. One of the Americans sneaks his way into the German camp and kidnaps a German officer. Coincidentally - because it’s only a four-page story - the officer is the guy who supervised the laying of the mines. Fearful of being killed by his captors or the mines, the German officer leads them to safety.

Some more paid ads. You can get 102 “smash hits including the top twist tunes” for $3.49. I’m guessing the songs came on cheap floppy records that didn’t last for more than a few plays.

If you wanted to “stop stooping,” the Piper Brace Company would be thrilled to send you the amazing new Pi Peer Shoulder Brace. The price was $4.95. In 2017 dollars, that would be $39.36.

From World Wide Specialities, a 1963 comics reader could purchase a genuine shark’s tooth necklace of beaded chain for $1.89 apiece. A Flippy the Frogman toy was $1.98.

“Jungle Passage” (8 pages) was the afore-mentioned cover story. It was drawn by the great Sam Glanzman, whose work was always the best in any Charlton war comic, and probably written by Gill.

Three American soldiers are separated from their squad on a Pacific island. They fight their way across the island, causing havoc among the Japanese who hold the island. When it looks like their luck has run out, they are rescued by their fellow American soldiers. Mostly because it was the last page of the story. Many of these tales just bounce from action scene to action scene until they reach that last page. Character development was something you saw in the war comics published by DC Comics or in the rare Charlton story like “Return to Siena.”

“The Art of Warfare” (2 pages) was a prose article about a book it calls an “ancient famous Chinese classic.” The unknown author says he got it on a trip to Taiwan. In discussing it, he applies some of its tenets to the Cold War. He concludes by opining that, even as the world seems to be heading towards push-button warfare, we will still have living soldiers to fight. It’s 2017 and the author has not been proven wrong.

The text piece is followed by a full-page contest announcement from Bonomo, the makers of Turkish Taffy. I could never finish a piece of Turkish Taffy, which was a hard candy that tasted like flavored chalk dust.
The grand prizes were two Westinghouse portable, 19-inch TV sets. There were ten Columbia Torpedo bicycles for second-place winners. The fifty third-place winners would get Bar-Zim Family Game Chests that contained chess, checkers, dominoes, roulette, horse-racing and many other games.

“Flying Eye” (6 pages), the final story in the issue, is drawn by the Nicholas-Alascia team and likely written by Gill. The setting is North Africa early in World War II. The American artillery has been taking its lumps because the Germans move around too much for them to target them. So the brass sends in Piper Cubs to help the artillery guys improve their accuracy. So we get resentful banter from the artillery guys until the seeing-eyes prove their worth and save the soldiers on the ground. Then it’s all smiling banter and mock insults. Because war brings people together.

Palmer-Jones Publishing sprung for a full-page advertisement. Some creepy-looking guy says “Give me just one evening and I’ll teach you to hypnotize easily!” Of course, he also wants you to give him $1.98, but he gives you a choice of hypnotic powers. Just check the ones you want from this list:

The last one is the easiest. Just convince dumb people to send you $1.98 to learn hypnotism.

The remaining full-page ads were placed by...

International Correspondence School, which would send you “How to Succeed” and an opportunity booklet before you signed up to get your high school diploma or schedule vocational courses in such fields as automobile, art, building trades, electronics, engineering, air conditioning, drafting, business, chemistry and radio-TV.

Mike Marvel System, in which Mike would teach you his secret new Dynaflex method to build you a magnificent new he-man-muscled body in just ten minutes a day with no exercise. This is what got Victor Frankenstein in trouble.

Dean Studios. This company fascinates me. The ad featured four “no cost” ads from the Dean Studios of Des Moines, Iowa. The “no cost” items were a male or female miniature dog that you could hold in your hand; a 10-second Polaroid camera; a tiny, powerful Bulovia Radio; and a new real, live miniature monkey that, like the dog and the radio, you could hold in your hand. The advertising copy is really small. Near as I can figure, these “no cost” items are a come-on for the company’s hand-painted photo enlargements. The supply of each item was said to be limited.

A modicum of online research turned up a terrific article from 2009 titled “Top 10 Outrageous Comic Book Advertisements.” Here’s what the article says about the miniature dog offer:

Please give me a home at no cost – Paris Hilton must have read this ad to get her tea cup dog, poodle, or whatever it is. They give you good advice and say you can keep it in a box and enjoy teaching it tricks. Yes, like play dead, because keeping your dog in a box will suck all the life out of it. But hurry, they only have a limited supply of miniature dogs. Imagine the storage facilities.

The Truth – You could get a dog (and some ads offered a monkey) if you could get 20 of your friends to order hand colored enlargements of photos they send in to Dean Studios, the ad’s sponsor. I’m betting not many people could sucker 20 other people to pay for this rip off, but I assume a few did. Getting the mutant dog or the half-dead monkey with HIV must have been quite a reality check.
Battlefield Action #49 is not a comic I would have bought back in 1963. My interest in war comics was pretty much limited to Marvel’s Sgt. Fury and His Howling Commandoes, DC’s Our Army at War (because my younger brother had a subscription to it) and Star Spangled War Stories (because it had soldiers fighting dinosaurs). But, clearly, Charlton’s war comics were profitable for the company and, now that I’m older and wiser, I can appreciate Sam Glanzman’s terrific art and storytelling...and the occasional Joe Gill gem. I’ll be writing about three more Charlton war comics before I reach the end of this July 1963 series.

Posted by Tony Isabella at 7:43 AM