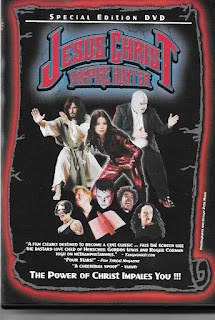 I’m writing about Easter-themed horror movies. Yesterday, I wrote about two “secular” horror movies...and didn’t much care for either of them. Today, I go the “spiritual” route with two very different films that have some connection to Jesus Christ. If you don’t know who Jesus Christ is, you can “Google” him. He won’t think you’re a stalker or anything. We commence...

The power of Christ impales you!!! I’m a sucker for a good line and that’s the one that got me to spend actual legal currency to buy a copy of Jesus Christ Vampire Hunter [2001]. The movie is an action comedy horror musical and was made on two years worth of weekends on an estimate budget of $100,000. And, yes, I did say “musical.”

The movie was written by Ian Driscoll, who also plays vampire boss Johnny Golgotha. It was directed by Lee Demarbre. On the Internet Movie Database, Demarbre wrote this combination synopsis and plug for his movie:

The first testament says "an eye for an eye." The second testament says "love thy neighbor." The third testament KICKS ASS! The filmmaking team that brought you Harry Knuckles and won the "Spirit of Slamdance" prize with Harry Knuckles and the Treasure of the Aztec Mummy ups the ante with this tale of the ultimate action hero: Jesus Christ. The second coming is upon us, and Jesus has returned to earth. But before he can get down to the serious business of judging the living and the dead, he has to contend with an army of vampires that can walk in the daylight. Combining kung-fu action with biblical prophecy and a liberal dose of humor, the film teams the Savior with Mexican wrestling hero El Santos against mythological horrors and science gone mad, and also manages to address contemporary sexual politics. And did we mention that it's a musical? This sure ain't Sunday School.

Jesus has returned and no one seems to have noticed. He’s hanging out at the beach, baptizing people, building sand castles, putting sand castles in his sermons, that sort of thing. At the same time, the lesbians of Ottawa are being taken by vampires and converted to those unholy ranks. Two priests recruit Jesus to the battle against the vampires before being killed by vampires.

Then...oh, heck, I can’t give you a blow-by-blow on this one. It’s got Jesus being attacked by atheist martial arts fighters for some damn reason. It’s got the shiny red jumpsuit wearing Mary Magnum fighting alongside Jesus, taking him clothes-shopping and buying a racist set of salt-and-pepper shakers. It’s got a Broadway-style song-and-dance number in the streets. It’s got El Santos. It’s got a woman who accompanies El Santos and whose butt gets grabbed by just about every character, including Jesus. It’s got a mad doctor who harvests skin from dead lesbians and uses it to allow vampires to walk by day. I think that last bit had two purposes. It allowed for over-the-top gore when the doc used internal organs as weapons and, by allowing the vampires to walk by day, it saved the director the expense of shooting at night.

The hopelessly retentive comics reader in me questioned why Jesus’ fighting prowess seemed to vary according to whatever the story needed it to be...and also why, having shown he could cure vampires, Jesus only cured some vampires. But, end of the day, or, rather, end of the movie, I had a good time with this movie.

I’d recommend Jesus Christ Vampire Hunter for when you want to watch something entertainingly silly...either by yourself or with your equally demented friends. On my admittedly silly rating scale of zero to ten Easter treats, I give this movie five out of ten “fun-size” Reese’s Peanut Butter Eggs. Which aren’t as much fun as full-sized Reese’s Peanut Butter Eggs, but are still, you know, fun. I wasn’t expecting to see any great Easter-themed horror movies in preparing to write yesterday’s and today’s bloggies. Then I watched Resurrection [1999], a no-bones-about-it creepy classic in which a serial killer tries to recreate the body of Christ from parts of his victims and then resurrect his ghoulish creation.

Resurrection starred Christopher Lambert as John Prudhomme, a Cajun police detective in Chicago whose faith has been shattered by the death of his young son a year earlier. Lambert was also credited as a producer and shared story credit with screenwriter Brad Mirman. Russell Mulcahy was the director.

Lambert was amazing in this movie. Two other stand-out performances come from Leland Orser as Prudhomme’s partner Andrew Hollinsworth, and Barbara Tyson as Prudhomme’s wife Sara. The actor playing the serial killer is also great, but I’m not going to tell you who he is on account of I don’t want to spoil that revelation. But I will mention a few other things about the movie.

Prudhomme’s struggles with his faith - he’s turned his back on the Church - is echoed by his being something of a pariah at his police station. Despite Prudhomme being damn good at his job, Hollinsworth is the only one willing to partner with him. The tension between John and wife Sara is powerful and very realistic.

Resurrection is as much a police procedural as it is a horror film. The cop shop scenes are excellent. The figuring out the why of the grisly dismemberments and murder, the racing to try to prevent more victims from being attacked and killed, the deductions that lead to the identity of the killer...these are all first-rate storytelling.

The movie runs a hour and 45 minutes and never drags. The surprise twists and turns. The shocking but tempered scenes of horror. The reaction of the cops as they track their suspect and rage against being a step behind him most of the time. The human drama as most wonderfully shown in Prudhomme’s journey. When I exhaled at the end of the movie, it felt like I had not taken a proper breath during those 105 minutes of the movie. Wow. Just wow.

Resurrection gets my highest recommendation. I’m amazed the movie went straight to DVD in the United States. I’m astonished I hadn’t heard of it earlier. It’s a keeper.

On my scale of zero to ten Easter treats, Resurrection gets a full ten solid milk chocolate rabbits...and not the little ones either. I’m talking large and top of the line candy here.

That’s it for this year’s Easter-themed horror movies. I’m interested in your suggestions for Easter 2018 and also for horror and monster movies for the rest of this year's holidays.

Posted by Tony Isabella at 7:37 AM