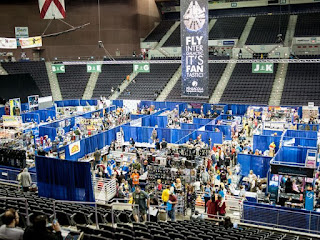 Bloggy Tony and Sainted Wife Barb are in Pensacola, Florida for the finale of the wondrous Pensacon 2017, held Friday through Sunday, February 17-19...
Pensacon 2017 was one of the best weekends of my life. However, by Sunday, I was pretty much running on fumes.

Barb had wanted to go to the beach that morning, which turned out to be great fun for her. The Pensacon Transportation Team drove her to the beach and picked her up a few hours later. We got back together after my Sunday panels.

The Pensacon vendor layout (shown above) was a huge space that, at peak times, was packed with eager fans looking at the millions of items available for purchase. There were some guests on the floor as well. I took a break from my own Artists Alley table to spend a few minutes with legendary comics creator Mike Grell, a dear pal of over four decades. We caught each other up on what was going on in our lives...and then it was back to my own table.

The most dominant structure in the vendor area was my friend Alexi Vanderberg’s Bard’s Tower, which loomed over everything else in the area. From the Bard’s Tower Facebook page:

The Bard's Tower is the celebrity bookstore that features all of the greatest authors in science fiction & fantasy! Check your local con for Bard's Tower!

Alexi’s line-up of authors was impressive: Kevin J. Anderson, Robin Hobb, Larry Dixon, Mercedes Lackey, Ramon Terrell, Quincy Allen, Neo Edmund and D.J. Butler. Sales were brisk, making for very happy authors and fans. Alexi and I have talked about me joining him in the Tower at some future convention. I’ll do my best to make that happen because I’m sure it would be a great experience.

Pensacon was fun from start to finish, but there was one moment of annoyance for me. While I was at my Artists Alley table, I couldn’t help but overhear this know-nothing clown trying to impress a woman with his knowledge of the “Marvel Method” of writing for artists. It was pretty obvious that he’d never worked for Marvel in any way, shape or form and very likely he had never written an actual comic book anywhere other than inside his ego-inflated head. And that’s coming from a guy - me - who admits to a fairly healthy ego himself.

There is no one “Marvel Method” and, trust me, when I was doing a bunch of writing for Marvel back in the 1970s, I wrote comic-book stories in every way imaginable, depending on the situation at the time I wrote them. I wrote full scripts for some artists. I wrote loose page-by-page plots for others. I wrote panel-by-panel plots for others. A few times, when an artist needed work right away, I broke down the plot on index cards and read it to the artist over the phone. In desperate situations, which I was able to avoid most of the time, I sat down with an artist and worked out the plot with him. That’s not saying some writers didn’t have preferred ways of working with artists, but even those writers sometimes had to adapt to deadline or other situations.

The pontificating fan was basing his knowledge of the Marvel Method on shorthand descriptions of the process and unverified stories of how the artist did everything. I didn’t correct him, but I really hope that young woman checked out what he told her and got a more accurate picture of how it’s really been done.

Both of my Sunday panels were at the Saenger Theatre. As they were nearly back-to-back, I was there for a little over two hours. The first panel was...

How to Make a Truly Terrible Comic: Common Storytelling Mistakes and How to Avoid Them:

Everyone gives advice on how to make great comics, but how do you make terrible ones? By learning the mistakes that other make, you can improve your own creations.

My fellow panelists were Pat Broderick, Barry Gregory and Jeremy Whitley. We talked about common mistakes. As best as I recall, my suggestions were...

Don’t assume your readers know your characters and ongoing story as well as you do. Every comic book is someone’s first issue of that title. Give them the information they need to follow your ongoing story.

Do research. If you’re dealing with real-world stuff, make sure you get it right. Nothing takes a reader out of a story like realizing the writer or artist knows nothing about something with which the reader is very familiar.

Make sure you have an ending. That’s not saying you can’t change it if something better comes into your head while you’re writing the story. I’ve lost track of how many extended stories, especially at DC and Marvel and often written by top writers, fell apart when I got to the final scenes. They started strong, but they didn’t have equally strong endings.

The second panel was...

The Starving Artist: Myths and Realities of the Profession:

Everyone knows the myth of the "starving artist". However, working artists get paid and actually do not have to starve. These professionals will discuss what the industry is really like and what to expect when pursuing a career in art.
My fellow panelists were John Dell, Derec Donovan, Roland Paris and Steve Scott. All had good advice for hopeful writers and artists. My contributions were these:

Get it in writing...and I speak from personal experience here. It doesn’t mean the client will honor the agreement, but if gives you some ammunition when you seek what is owed you.

Get a lawyer. The good things that have happened with me in recent years have come because I hired a top-notch attorney and had him do the talking for me.

Don’t work for so-called “good exposure.” Honest to Godzilla, you are better off self-publishing or putting your work online without charge than doing free work for a publisher. The only exception to this would be if you have equity in a creator-owned project. Then you’re working for yourself as much as for your creative partner.

Don’t over commit yourself. Figure out a reasonable standard as to how much work you can do in a certain amount of time. If you agree to do, say, 50 pages for a client, and turn in three of the pages late, the client will remember those three pages. This has been a problem for me and still is to some extent. I’ll keep working on getting it right until the day I die.

Don’t take “emergency” jobs that benefit the editor/publisher more than you. I’ve seen too many cases where a job below an artist’s or writer’s standards came back to bite them on the ass. Neither the company nor the fans are likely to remember that the deadline was met because of your fast but less than wonderful work. They’ll only remember that less than wonderful work and use it as a reason to (editor/publisher) not give you work or (fans) to not buy your work. Your first great responsibility is to yourself.

After the panels, I went back to the Pensacola Bay Center, grabbed something to eat and went back to my Artists Alley table. Sainted Wife Barb showed up a little while later, all aglow from her time at the beach. Those last few hours at the show are kind of a blur. I signed some books. I answered some questions. I said goodbye to other guests. We walked back to the hotel.

For our final meal in Pensacola, Barb and I went to McGuire’s Irish Pub on East Gregory Street. Since we were flying back home very early on Monday morning, neither of us wanted to eat a big meal, but we both wished we had gone to McGuire’s earlier during our stay in the city. What a great experience!

The place feels like the biggest Irish pub you have ever seen. It has, literally, over a million dollars in one-dollar bills stapled to its walls because that was a thing people started to do and it caught on. The restaurant was just plain charming.

The food was incredible and the portions were as huge as McGuire’s itself. We split a Swiss Burger that was made to perfection. Barb has a Caesar salad that I nibbled at as well. When we first sat, we were brought a fresh-baked loaf of bread that really hit home with this baker’s son. Because we ordered a food item, we could get a  bowl of delicious bean soup for thirty-eight cents. Barb stuck to water, but I washed my meal down with McGuire’s amazing root beer.

McGuire’s was our favorite Pensacola restaurant and, when next we visit that fine city, you can be sure it’ll be the first one that we return to. As I said a few bloggy things back, Pensacola is one of the very few cities I could see myself living in.

When we got back to the hotel, we packed and went to sleep. We had early morning flights back to Cleveland.

Maria and the Transportation Team were waiting for us when we came down to the hotel lobby on Monday morning. Hugs were exchanged and smiles were large. If Pensacon invites me back, I’ll be back...and I think I can convince Barb to make the trip as well. She enjoyed the city and the convention.

Barb having a good time was the most important thing for me. She’s seen so much of the bad things in the comics industry and kept me going through them. It’s wonderful to be able to share the better parts of this business with her.

Because we had made our flight plans separately, Barb and I did not fly back together. My first flight left before hers. My connecting flight left after her connecting flight. She arrived in Cleveland before I did. When I got my luggage, she was already driving back to the airport to pick me up, having retrieved her car from nearby parking. We were home.

Pensacon has become one of my favorite shows. It has such a great mix of pop culture stuff that I think almost anyone would be able to find a full weekend’s worth of stuff to enjoy. It has one of the best teams of promoters and volunteers I’ve ever seen. I’m wishing it was already time for the 2018 event.

If you’re a professional and Pensacon extends you a guest invitation, accept it and prepare for a wonderful experience. If you’re a fan looking for a big convention that feels small and friendly, this is the convention for you.

Thanks to all the Pensacon people for giving Barb and I one of the best weekends ever. We love you all madly.

I’ll be back tomorrow with the new installment of our long-running Rawhide Kid Wednesday series. See you then.

Posted by Tony Isabella at 8:18 AM