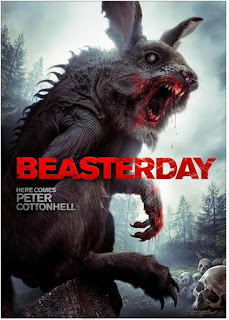 Holidays and horror are a natural combination, which is why I wage my own personal “War on Christmas” all year long by watching and then writing about Christmas-themed horror and monster movies. I extend the same shocking lack of propriety to other holidays, which brings us to Easter.

Were Easter-themed horror movie somehow considered too blasphemous for the libraries to acquire? Had they all been destroyed by over-zealous Christians? I tried not to think about either scenario and, instead, sought other ways to see the movies. I viewed two of them online and purchased two more via Amazon.

First up is Beaster Day: Here Comes Peter Cottonhell (2014), which I was able to watch on at Kings of Horror on YouTube. Here is the Internet Movie Database synopsis:

A giant bloodthirsty Easter bunny starts viciously killing the local townsfolk. When the Mayor refuses to act and the attacks grow more gruesome, the town finds its very survival in the hands of a wannabe actress and a crazy dog-catcher.

Between the cool cover art and that synopsis, you might think this might not be so bad. You would be wrong.

The giant Easter bunny, whose origins are never revealed, save for a passing comment about mutation at the end of the film, does not look like the creature on the cover art. It is a puppet of a giant monster bunny that doesn’t seem to have any moving parts. When it “chases” its human prey, it seems impossible that it would be able to catch its victims. When, on rare occasion, it “hops” after them, you can almost see the wires making it do so. It was a fascinating “special effect,” so awful that I couldn’t take my eyes off it. If the monster ever actually moved, I probably would have screamed in sheer horror. It’s alive! It’s alive!

Directed and written by the Snygg Brothers, the 87-minute film had an alleged budget of $150,000. It stars a cast of unknowns, some of whom try to rise above the script. Yet, despite everything Beaster Day had going against it, I couldn’t stop watching it. I’ll never watch it again, but I had to get through it this one time.

The film opens with a bizarre wedding reception where the best man, the son of the groom, delivers a savage speech condemning his dad and his dad’s new, young wife. The best man then leaves the party to become the giant rabbit’s first victim. The movie does not lack for severed limbs and buckets of unconvincing blood.

Doug [Peter Sullivan] is a crazed dog-catcher who can’t handle not being the employee of the year. Brenda [Marisol Custodio] wants to be an actress, a poet or anything but gainfully employed. She takes a dog-catcher job because her father is through with paying for her artistic dreams. Hector [Jon Arthur] is another dog-catcher, the winner of the employee award and the only guy in the movie that has a chance with Brenda. Which gives Doug two reasons to dislike him.

The oddest character might be Mayor Farnsworth [John Fedele]. He’s so many things. He appears to be perpetually stoned. He’s a con man who uses his position to enrich himself. In the proud tradition of every monster movie since Jaws, he ignores the clear evidence that something horrible is out there rather than cancel the town’s very profitable Easter celebration.

Beaster Day’s awfulness is compelling. Some of the rabbit’s victims are good for a few laughs. Like the young lady so busy texting that she barely realizes she’s being killed, texting “YOLO” as she dies. But, overall, you have to really love awful movies to watch all of this one. I plead guilty to having no regard for good taste or my personal mental health.

On a scale of one to ten Easter treats, Beaster Day gets one hollow chocolate rabbit with the ears already bitten off. 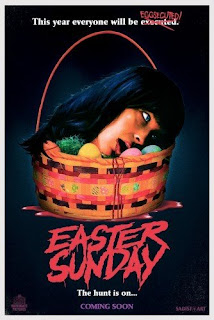 If Beaster Day was mildly amusing in places, Easter Sunday (2014) has almost nothing but gore going for it. I actually regret the 95 minutes I spent watching it. The only benefit to that is that I can now warn you about this crappy film. Here’s the synopsis from the Internet Movie Database:

It's been 24 years since the deranged serial killer Douglas Fisher was executed by police on Easter night. This year, a group of hard partying teenagers not only raise some hell, but literally raise the dead! The teens accidentally conjure the spirit of Douglas Fisher... aka the bunny masked killer! These teens have until Midnight on Easter to stop the evil bunny slasher, or he will tear their town, and everyone in it into pieces. There will be no candy in your Easter basket, just the limbs and body parts of your family and friends... Doug Fisher kills everyone in sight, if you're not careful you'll lose your head this Easter night. The ultimate in bunny terror!
The above synopsis was written by Easter Sunday director and writer  Jeremy Todd Morehead who allegedly laid this cinematic turd on a budget of ten grand. I’m guessing the lousy actors paid him for the chance to be in this picture.

A couple of true confessions which doubtless inform my low opinion of this movie...

Robert Z'Dar, best known for Maniac Cop 1-3, plays Sheriff Arkin, the man who originally killed Fisher. He looks like he’s got a foot and a few toes in the grave. He may have taken ill during filming because his character’s final scene is pretty obviously played by someone else whose features are wrapped in bandages. While I think the late Z’Dar was good in Maniac Cop, I had a personal problem with him. Here’s the scoop on that...

To the best of my recollection, Z’Dar was the only celebrity guest ever thrown out of Mid-Ohio-Con before the convention opened, but after he arrived at the con hotel. He behaved so badly the night before the show that the hotel insisted he remain in his room until his flight home. He was clearly ailing at the time, but his behavior was inexcusable.

Morehead is a fan of Italian horror movies and so included a great number of explicit and gruesome injury-to-the-eye scenes in Easter Sunday. I have an intense display of injury-to-the-eye stuff, so we had a basic difference right there.

Here’s my quick summary of the movie...

A mediocre rock band throws a cookout. Having learned one of their untalented crew is the son of Doug Fisher, they pull out a Ouija board to try to contact the late killer. Fisher possesses his son, who starts talking in a ridiculously high-pitched voice. The madman mystically summons his paper-mache bunny mask and axe. He gets down to killing people in horrible ways. To remain among the living past midnight on Easter Sunday, Fisher must kill everyone who took part in bringing him back from the dead. He doesn’t succeed.

There are but two things I liked in this movie, although one is so clumsy as to be laughable. The first is the look of Fisher in his bunny mask and business suit. It’s a chilling image that would have worked well in a better movie.

The second is the next-to-last scene wherein a postman delivers a package to one of the two survivors. It’s a year after the second killing of Fisher. The postman is played by Ari Lehman, who was the first Jason Voorhees in Friday the 13th (1980). His character talks about making deliveries to Camp Crystal Lake, the setting of that movie,  and makes other references to the movie as well. That was a funny scene.

The final scene is just dumb. The survivor opens up the package, a standard priority mail box, and a hand reaches from said package to strangle him. Really.

If there’s a God in Heaven, there will be no second coming of this movie. On a scale of one to ten Easter treats, it gets a chocolate egg with a vomit center.

Okay, my first day of Easter-themed horror movies didn’t come off so well. Come back tomorrow when I take a more spiritual path and review Jesus Christ Vampire Hunter (2001) and Resurrection (1999). See you then.

Posted by Tony Isabella at 3:45 AM