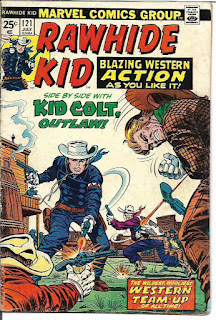 The Rawhide Kid is my favorite western comics character and one of my favorite comics characters period.  Something about the short of stature - but big on courage, honor and fighting skills - Johnny Clay speaks to me.  After rereading the Kid’s earliest adventures when Marvel reprinted them in a pair of Marvel Masterworks and an Essential Rawhide Kid volume, I wanted to reacquire every Rawhide Kid comic, reread them and write about them in this bloggy thing of mine. We’re currently in the extended twilight of the title. We’ve seen the last new Rawhide Kid story that will appear in the title, which is now a bimonthly reprint. This is the 108th installment in my “Rawhide Kid Wednesday” series.

The Rawhide Kid #121 [July 1974] had a new cover penciled by Larry Lieber and inked by Frank Giacoia. It shows the Kid fighting side by side with Kid Colt. Instead, the issue reprints the Rawhide Kid story from Rawhide Kid #40 [June 1964]. There’s just one teeny tiny problem with the new cover which can be seen by comparing it to the original Jack Kirby/Sol Brodsky cover. 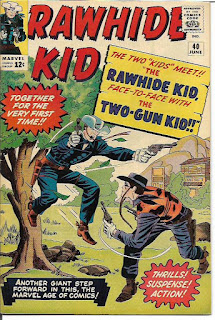 Since I wasn’t involved with this issue, all I can give you are my best guesses for this error. It’s possible the Lieber/Giacoia cover was intended for the previous issue, which did guest-star Kid Colt, and didn’t make it for that issue. It’s all possible this new cover was really intended for an issue of Western Team-Up that never came out because Western Team-Up ended up being a one-shot. There is a 15-page Kid Colt/Rawhide Kid team-up by Lieber that might have been done around this time and which was ultimately published in Giant-Size Kid Colt #1 [January 1975]. If anyone out there can confirm or deny either of my guesses, I’d love to hear from you.

I wrote about “The Rawhide Kid Meets The Two-Gun Kid” back in October, 2012. You can read my comments here.

The “Marvel Bullpen Bulletins” page for this issue had the return of “Stan Lee’s Soapbox,” but it wasn’t one of Stan’s better ones. It was a puff piece touting Marvel’s various higher-price titles: the 35-cent Giant-Size comics, the 60-cent Super-Sized comics and the 75-cent black-and-white magazines. Stan also boasted that the FOOM fan club now had more than 25,000 members and invited all of those members to send in ideas and suggestions to make the fan club even better.

Sidebar. I wrote the Werewolf by Night/Tigra story mentioned above. I also wrote the new framing sequence for Giant-Size Defenders #1 and picked the reprints for the issue. I don’t remember why Marvel had to go mostly reprint for that debut, but it was likely due to the usual insane deadlines we faced. I do remember my work on the issue was a rush job all around.

More plugs and shout-outs filled the third section of the Bullpen page. Deathlok would be launched in Astonishing Tales in “a story concocted and drawn by Rich (Swash) Buckler, and dynamic dialogue by Devil-May-Care Doug Moench.

Lethal Larry Hama was the new artist of the Iron Fist feature that was running in Marvel Premiere.

Peerless Paul Gulacy was the new artist on Master of Kung Fu. Like Crafty Craig Russell and Valiant Val Mayerik, Gulacy was a protégé of Dapper Dan Adkins.

Dauntless Don Perlin was drawing Werewolf by Night in both the 25-cent standard-size comic and the 35-cent giant-size comic.

Debonair Dave Cockrum would be returning as the embellisher of the Avengers.

Other dropped names: Affable Al Milgrom and (Santa) Klaus Janson. Considering some of these nicknames, I really lucked out when I was christened Tony (the Tiger) Isabella.

There was no “Mighty Marvel Checklist” this time around, not even in this issue’s “Bullpen Bonus Page”

Speaking of that “Bullpen Bonus Page”...

What a waste! The whole page is a plug for the Marvel Value Stamps and the Marvel Value Stamps Stampbook, which, along with a “special bonus poster,” was yours for fifty cents...to cover the postage and handling. From day one, I hated the concept of these value stamps. What they really did was decrease the value of Odin-knows-how-many comic books that they were cut from.

On this page, it’s announced that fans would get MVS discounts from Phil Seuling’s New York Comic Art Convention in July and the San Diego Comics Convention later that summer. I wonder how many fans got their MVS Stampbooks stamped at those events.

As long as I’m ragging on this idiotic notion, let me ask how many of you have bought an old issue from this era and, on reading it, discovered there was a Marvel Value Stamp-size hole in your comic book. During my years as a comics retailer, I probably came across dozens of these damaged comic books. Sigh. 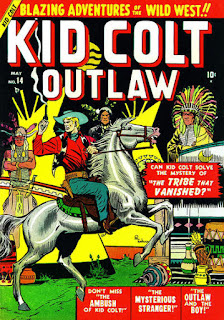 This issue’s non-series reprint is “Growler Joe Meets the Stranger” (4 pages) from Kid Colt Outlaw #14 [May 1951]. Possibly penciled by Myron Fass, this story is so gosh-darned awful that I consider it my civic duty to spoil it for you.

It’s 1880. Former Sheriff Clay Barker drinks in disgrace. When a stranger to the town asks how the lawman lost his badge, he learns that Barker backed down when he called out by a bad hombre named Growler Joe. The stranger walks over to Barker’s table and tells him he would like to help.

Barker tells the stranger Growler Joe hangs out at another saloon in town. The stranger goes to the Big Strike Saloon and calls out Growler Joe. He has a prior beef with Growler Joe on account of Joe tried to back-shoot him in Texas.

The two men draw. The stranger shoots the guns out of Joe’s hands. Why does the story not name the stranger? Patience. I will reveal every bit of awfulness in this story.

The stranger tells Barker that Growler Joe has been dealt with. But the former sheriff figures there’s no coming back from the cowardice he showed. The stranger has a plan. The sheriff agrees to it.

Back at the Big Strike Saloon, when discussing fast draws with the clientele, the stranger says:

Down in Yuma they say thar’s a fella by the name of Clay Barker who’s greased lightnin’ on the draw. That’s one hombre I ain’t hankerin’ to draw on!

Told Barker is the town’s ex-sheriff and asked if he’s funning with the barflies, the stranger double down and says:

No, sirree! There’s many an hombre down Rio way who’ll steer plumb clear of Barker if they get wind that he’s around.

That’s when Barker enters the saloon and proclaims that, sheriff or no sheriff, there ain’t gonna be any blood-spilling in this town. Barker calls out the stranger and outdraws him. The stranger stands down and leaves town, leaving the townspeople stunned:

Jumpin’ Jackrabbits! Barker out drawed the man who gunned Growler Joe! I reckon thar ain’t a man west of the Pecos who deserves that badge more than Barker does!

On the outskirts of town, Barker thanks the stranger for his help. He asks the man what his name is. Brace yourselves:

Folks up New Mexico way call me Billy...Billy the Kid! 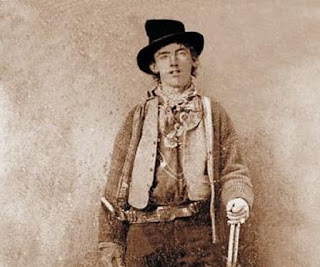 Comics writers of the 1950s and 1960s loved to use real historical figures in their western stories. Usually they get the details as wrong as wrong gets. However, save for the fact that this version of Billy the Kid is insanely generous to the old sheriff, the Kid’s timeline actually works for this story. From Wikipedia...

His first arrest was for stealing food in late 1875, and within five months he was arrested for stealing clothing and firearms. His escape from jail two days later and flight from New Mexico Territory into Arizona Territory made him both an outlaw and a federal fugitive. After murdering a blacksmith during an altercation in August 1877, Bonney became a wanted man in Arizona Territory and returned to New Mexico, where he joined a group of cattle rustlers. He became a well-known figure in the region when he joined the Regulators and took part in the Lincoln County War. In April 1878, however, the Regulators killed three men, including Lincoln County Sheriff William J. Brady and one of his deputies. Bonney and two other Regulators were later charged with killing all three men.

Bonney's notoriety grew in December 1880 when the Las Vegas Gazette in Las Vegas, New Mexico, and the New York Sun carried stories about his crimes. He was captured by Sheriff Pat Garrett later that same month, tried and convicted of the murder of Brady in April 1881, and sentenced to hang in May of that year. Bonney escaped from jail on April 28, 1881, killing two sheriff's deputies in the process, and evaded capture for more than two months. He ultimately was shot and killed by Garrett in Fort Sumner on July 14, 1881. Over the next several decades, legends grew that Bonney had not died that night, and a number of men claimed they were him.

One more thing for today. Around this time, Marvel was running one-line house ads at the bottom of most (but not all) story pages in an issue. I have a vague memory of having seen something like this in British comics weeklies and of maybe having done something like it in Marvel’s British weeklies during my time as the editor of those produced-in-America titles.

Here are the one-liners from Rawhide Kid #121:

WHO IS THE TARANTULA? FIND OUT IN SPIDER-MAN #134!

FIRE VS. GOLD! THE HUMAN TORCH VS. ICEMAN - IN MARVEL TEAM-UP!

(Fire vs. Gold? Clearly, the proofreading of these one-liners left much to be desired.)

DIG “THE EXORCIST”? TRY THE SON OF SATAN - IN MARVEL SPOTLIGHT!

AT LAST! THE MAN-WOLF STARS IN CREATURES ON THE LOOSE!

Though I wrote similar one-line notices somewhere along the line, I’m fairly certain I didn’t write any of the above! Then again, I did so many odd jobs for Marvel during my time there that it’s in the realm of possibility that I did write these and don’t remember writing them. Those were wild times.

That’s all for today. I’ll be back tomorrow with another blast from the past. See you then.

Posted by Tony Isabella at 1:06 AM