IN THE MATTER OF ARDIAN SYAF 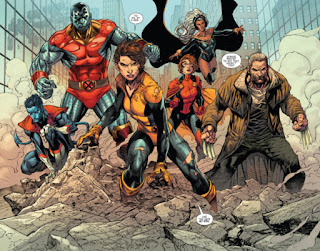 Online comicdom got quite a shock last week when it was discovered that Indonesian artist Ardian Syaf had put anti-Christian and anti-Semitic elements into his art for X-Men Gold #1, the current reboot du jour of the X-Men Universe. Though Syaf was described in several stories as a “superstar artist,” I confess that, while I’d seen his name in various credits, I never knew he was considered a star of any magnitude. A search of this blog and my “Tony’s Tips” columns didn’t turn up any mentions of him.

From the New York Times:

On Saturday, Marvel said that it would remove artwork from the first issue of X-Men Gold, part of a reboot of the X-Men franchise, after readers in Indonesia raised alarm bells on Reddit and elsewhere on social media about what they said were anti-Christian and anti-Semitic messages in some panels of the comic.

The messages that jumped out to readers in Indonesia appeared to refer to political frictions there over Basuki Tjahaja Purnama, who is the first Christian governor of Jakarta, the capital, in more than 50 years. He is up for re-election this month.

Some images in the comic appeared to refer to hard-line Islamist opposition to Mr. Basuki, who is also known by the nickname Ahok. Others seemed to have less to do with Indonesian politics and more to do with anti-Semitism, the critics said. The artist who sneaked the messages into the images was Ardian Syaf, an Indonesian citizen.

NOTE: I’m not going to discuss the actual images in today’s bloggy thing. Rest assured you will be able to find such discussions all over the Internet.

Syaf’s Twitter responses seemed to be more expressions of his take on his own faith rather than apologies for or even realizations his sneaky little political messages were offensive. When Marvel kicked Syaf to the curb, he moaned about how his career was over, blamed the oversensitive Jews who run Disney - Marvel’s parent company - and claimed he wasn’t a racist. According to Heatstreet, Syaf also deleted a Facebook photo of the artist meeting with Rizieq Shihab, the leader of the Islamist organization Islamic Defenders Front (known by the acronym FPI).

The group has been involved in numerous acts of violence against non-Muslims in Indonesia, and was one of the organizers of the 212 protest. In the post, Syaf says he accepted an invitation to meet with the group’s founder.

One of Syaf’s earlier attempts at diverting attention from himself was to raise the question of whether his situation would adversely affect other Indonesian artists working for Marvel. It hasn’t and, honestly, it never would. Save for the very occasional brain fart, today’s publishers have evolved well past blaming entire groups of people for the sins of a few.

The usual alt-Nazi comics fans laid the blame for Syaf’s actions on the “Social Justice Warriors” who put their “lib-tard” beliefs into their own comic books. These morons have never realized that, for a great many of us, “Social Justice Warrior” is a title we gladly accept because, in our own small and large ways, we are quite proud to be fighting for justice.

These unenlightened dregs of the right-wing cesspool are likewise not bright enough to understand there’s a difference between what Syaf did and what creators like me do. I will explain the obvious without any expectation of the trolls understanding it.

If I’m writing a work-for-hire story with a political message, as I’m currently doing, I don’t hide my intent from the client for whom I’m writing the story or series. In this specific case, it was right there in my initial proposal for the series. I didn’t attempt to sneak my message into my work. I was up front and center about it from the get-go.

Syaf wasn’t the writer of the story into which he was inserting his hateful messages. He was sneaking them into the story. Amazingly, he did this in an X-Men story, the Marvel franchise that has always been about inclusion and tolerance and has brought comfort and hope to members of diverse “outsider” groups of readers. He did this in an X-Men story featuring a team leader who is Jewish. Rather than decline the assignment, as a “superstar” artist could have done, he chose instead to attempt to subvert the story with his own racist views. He deserved to get shit-canned.

That’s everything I have to say on this subject. Come back tomorrow for another installment of “Rawhide Kid Wednesday.” See you then.