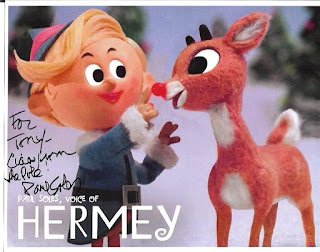 Mike DeSantis’ Great Lakes Comic-Con was held February 24 and 25 at the Macomb Community College, South Campus, Sports and Expo Center in Warren, Michigan. Friday was a fine day and I wrote about it in yesterday’s blog. Saturday awaits...

Saturday is almost always the busiest day at any convention, which makes a good breakfast an important part of that day. The Wyndham Garden’s Loon River Café provided a very nice breakfast buffet and, adding to the meal, sharing it with Nadine and Bill Messner-Loebs, old friends I don’t see nearly often enough. Thom Zahler joined us as well. It was a great start to a busy day.

Promoter Mike DeSantis and his GLCC crew had provided large display signs for the guests, which looked fantastic and made it easy for the fans to find us. According to my hastily-scrawled notes, “busy Saturday” translated into selling well over a dozen copies of Black Lightning Volume One and signing at least a hundred comic books and other Isabella-written items.

A big moment for me was meeting Paul Soles, the voice of Hermey the Elf in the Rankin/Bass' Rudolph the Red-Nosed Reindeer...and two of  my favorite Marvel Comics heroes. He voiced the Hulk in the 1966 Marvel Super-Heroes cartoons and Spider-Man in the original cartoon series from the late 1960s. In person, Soles was as delightful and sprightly gentleman. We bonded quickly. He even offered to schedule a dental appointment and check out my teeth, which, by the way, are in need of considerable work. But that’s a story for another time.

Paul and I discussed Hermey as the heart of that classic version of Rudolph, which I watched annually even before I had two children to watch it with. Rudolph was a misfit by birth, sort of a reindeer X-Man. Hermey’s “mutation” - wanting to be a dentist and not just another elf - was his own choice and one he embraced and forced himself to achieve. Hermey’s determination inspired and empowered all the other misfits he encountered. If Hermey practiced dentistry in my town, he’d be my dentist.

The other media guests were Nicholas Hammond, who played Spider-Man in the original live-action series, and wrestler Jake “the Snake” Roberts. I should have asked them to reenact the wrestling scene from Amazing Adult Fantasy #15.

The fans, which included a lot of cool cosplayers, had a wonderful time at the convention. One fan came in from New Hampshire because the comics guest list included so many creators whose work thrilled him as a younger man. As I mentioned in yesterday’s bloggy thing, the comics veteran roster for the event included Jim Shooter, Alex Saviuk, Arvell Jones and Keith Pollard. A lot of entertaining comic books came from those four men.

Shooter, with whom I have had public disputes, had a healthy line whenever he was behind his table. I was happy to see that because the industry doesn’t often realize how many fans us old guys have. That I have those disputes with Shooter doesn’t mean I don’t wish him well. He accomplished some impressive things during his career and he should be happy with them and not attempt to rewrite those moments in his career when he came up short in one way or another. I’ll have one more Shooter moment a little later today.

I saw several Facebook friends at the show, which is always a treat for me. At times like that, I remember that my original impression of Facebook was that it could be a useful promotional tool. That it became such a fun part of my life caught me by surprise, but I do cherish my page and the friends I’ve made through it.

Lots of love was expressed for Black Lightning and my creation of and work on the character. I’m limited as to what I can say about that work, but, suffice to say, I am far from done with Jefferson Pierce and his world. There were also words of praise for my work on Daredevil and Hawkman, my co-creation of Misty Knight with long-time pal Arvell Jones, my columns for Comics Buyer’s Guide and this bloggy thing. I may have blushed a couple of times.

To answer some frequently-asked questions...

I’m a big fan of the DC Comics shows on the CW. Likewise, I enjoy Marvel’s movies, Netflix shows, TV shows and cartoons. The special effects Oscar should have gone to Doctor Strange, which just about blew me out of my seat when I saw it.

I would love to see those Hawkman comics collected in hardcover and/or softcover. I think artist Richard Howell, a master of both action and human drama, did some impressive work there. When next I talk to DC about such things, I’ll push for this.

Chris Claremont did all the heavy lifting on Misty Knight. He took her to some very interesting places and other Marvel writers have continued her journey. There aren’t a lot of comics characters that I wrote in the past that I would like to write again, but Misty is one of them. And Tigra, too.

The convention cosplay was sensational. I saw a happy Black Widow that made me smile at her enthusiasm. There were many young ladies with purple hair, but that seemed to be a fashion statement. There was a great Bender (from Futurama) costume. Other favorites: the Black Cat of Spider-Man fame, Hawkwoman, Doctor Doom and the Rocketeer. Naturally, as the pastor of the First Church of Godzilla on Facebook, I was happy to see the convention’s grand prize in the cosplay competition go to Mecha-Godzilla.

I did take breaks from my table to see more of the show and visit some of my comics buddies. Besides my mania for old Marvel western comic books, I am developing an addiction to those wonderful Funko figures of comics and other media characters. Fortunately, both for my family and my wallet, I am resisting both for now. But it’s only a matter of time...

Arvell Jones and I did a Misty Knight panel, which is something we seem to be doing a lot of lately. Arvell and I don’t remember the birth of Misty the same way, but that makes for a lively and still friendly conversation. When I write about Misty in my forthcoming memoirs of sorts, I’ll likely include Arvell’s version in the book.

Here’s that Shooter moment I promised...

There’s this guy who’s hawking a video interview he did with Jim. He had become something of a pain in my ass because, up until a few months back, he was badgering me to be interviewed for his Shooter DVD and give my version of Shooter’s fictions about me. Of course, I declined. I have my own venues for that. It took something akin to a threat to get this guy to back off. He was at this show and he behaved himself. Good for him.

As the show was winding down, I walked over to Shooter’s table. I shook his hand and wished him a safe trip home. He did the same. Because we’re both adults and we both love comics and neither one of us has to be a dick about our rare meetings.

I had walked well away from Shooter’s table when the video guy came running up. He begged me to go back and reenact the handshake with Jim. He wanted a photo of it. For Godzilla knows what reason. His desperation made me laugh, but my response was a simple statement that he had missed the moment.

The show ended. Thom Zahler, my traveling companion, and I packed up our stuff and left. We had a nice dinner with our mutual friend Paul Storrie and a pleasant drive back to Ohio. 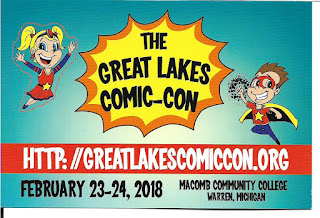 The Great Lakes Comic-Con was an amazing event. I had an excellent time and, schedule permitting, would not hesitate to return to this or one of Mike DeSantis’ other shows. The man and his great staff and volunteers put on a cool event that I would recommend to fans without hesitation. You can learn about his other shows by visiting his website. I’m looking forward to returning to Warren next year and many years after that.

I’ll be back tomorrow with another installment of my long-running “Rawhide Kid Wednesday” series. See you then.

Posted by Tony Isabella at 9:03 AM