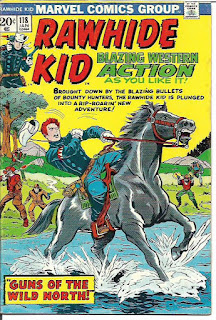 The Rawhide Kid is my favorite western comics character and one of my favorite comics characters period.  Something about the short of stature (but big on courage and fighting skills) Johnny Clay spoke to the short of stature (but big on comics-reading skills) teenage Tony Isabella.  After rereading the Kid’s earliest adventures when Marvel Comics reprinted them in a pair of Marvel Masterworks and an Essential Rawhide Kid volume, I wanted to reacquire every Rawhide Kid comic, reread them and write about them in this bloggy thing of mine. This is the 105th installment in that series.
The Rawhide Kid #118 [January 1974] was an all-reprint issue. There would be no new Rawhide Kid stories in the title and several issues until we started getting new covers again. This cover, which originally appeared as the cover of Rawhide Kid #53 [August 1966] is pencilled by Larry Lieber and possibly inked by him. The only reason I doubt that inker identification is because the Kid’s face looks like it was inked by George Tuska. I’m far from the best art detective in comics, but the face makes me question the Grand Comics Database identification.

Here’s the original version of the cover: 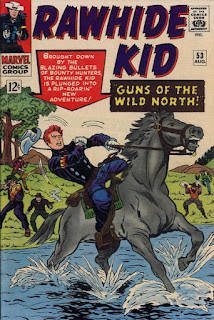 “Guns of the Wild North” is also from Rawhide Kid #53. However, for this reprint, the original 17-page story was cut to 16 pages. The reprint loses two panels from the second page in which the bounty hunters talk about how their warrant is no good if Rawhide crosses the river into Canada. The reprint then cuts three panels from the third page in which the hunters mistakenly believe they killed the Kid and in which Rawhide emerges from the river. I wrote about the original version of the story here.

The issue’s non-series reprint is “The Rio Kid” (4 pages). It was pencilled by Bob Forgione with inks by Jack Abel. The tale’s writer has yet to be identified.

The lawless, untamed town of Hair-Trigger Gap is all abuzz with the news that the dreaded Rio Kid is coming there:

I just heard down at the county seat that he’s a-comin’ to town with his gun belt strapped low!

The Kid’s reputation is known to all. He’s said to be the fastest and deadliest gun west of the Mississippi. The lawless element of the town is excited. The good citizens are thinking it’s time for them to move.

Two hours later, a red-haired stranger rides into town. His holster has the initials “RK” in it. The stranger asks if there’s a sheriff in town and is told there “ain’t none.” A well-dressed man pushes his way in front of the stranger.

STRANGER: Not any more, yuh don’t!

TURGON: What do yuh mean?

STRANGER: I been looking for a town about this size to hold out in and now I found it! This is my town from now on!

The two men face each other for long, silent seconds. Turgon looks like he’s fixing to draw down on the stranger, who just leans back against the bar unconcerned. Turgon blinks first.

Turgon declares that the town isn’t worth fighting over, He adds he was planning to leave anyway. Before the day is over, all the town outlaws leave as well.

The townspeople are glad the outlaws have left, but they are still concerned about the Rio Kid.

TOWNSMAN: This town may be yours for a while, but sooner or later the law will come to Hair-Trigger and you’ll be slinking out just like them.

The stranger tells the man the law is already there. The Rio Kid? He died in a gunfight six months early. The stranger’s real name is Cody and he was sent by the governor to clean up the area.

TOWNSMAN: And you out-bluffed all those gunfighters! But what if one of them had stood up to you and drawn on you???

CODY: I wouldn’t have been too worried. Yuh see, I’m the ranny who beat the Rio Kid six months ago! Now let’s start swearing in some deputies! We got work to do! 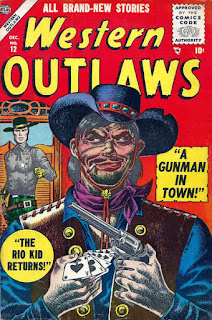 I always got a kick out of these twist ending stories, even when I saw the ending coming. “The Rio Kid” first appeared in Western Outlaws #12 [December 1955]. That issue had a cover by Joe Maneely with interior art by the Ross Andru/Mike Esposito team, Bob Brown, Al Hartley and Dick Ayers.

The only other editorial material in this issue was the full-page Marvel Bullpen Bulletins. The first third of the page is a “Stan’s Soapbox,” which, to my jaded 2017 sensibilities, reads like my old boss was trying to put a positive spin on the cancellation of some titles like Beware the Claws of the Cat and Night Nurse. He ended the column saying Marvel would be spending more time rapping with the readers in its letters columns.

The first news item was more of the same. Marvel’s black-and-white magazines were going quarterly for a spell so the company could see how they were doing and insure their quality. Oddly enough, I have no memory of this actually happening, but it’s possible I was too busy keeping up with my own numerous deadlines to take note of what was going in elsewhere in the company.

The second news item announced Supernatural Thrillers would forego the classic story adaptations and introduce a new feature instead. A secret FOOM code revealed the secret:

I’ll leave it to the code-breakers among you...or the FOOM members who still have their Spider-Man Code...to translate that for your fellow bloggy thing readers. As we know, the Living Mummy ended up being the new feature, but that might not have been the original plan for the title.

The rest of the page was advertised Marvel’s FOOM fan club. By this time, FOOM founder Jim Steranko had moved on and I had taken over as editor of the FOOM magazine. 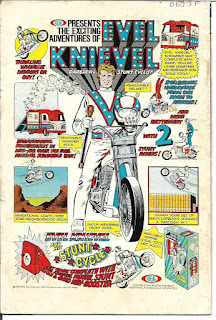 The back cover of the issue was an paid advertisement for Ideal’s Evil Knievel and His Stunt Cycle toy. I mention it and post the ad because it seems to have been inked by Murphy Anderson, one of the best comics artists there ever was.

That’s all I have for you this week. I’ll have another installment of Rawhide Kid Wednesday for you seven days from now and, for the morrow, something else. See you then.

Posted by Tony Isabella at 8:00 AM