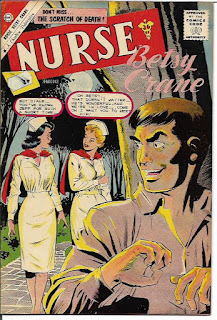 Welcome to “Old Comics” where I write about random comic books from my legendary Vast Accumulation of Stuff. For the most part, I’ll be talking about issues that predate my entry into the professional comics industry in late 1972. However, if I come across comics from the 1970s through the 1990s that I find interesting enough to write about, I’ll write about them.
Today’s comic is Nurse Betsy Crane #13 [Charlton; October 1961], a standard 36-page, all-in-color-for-a-dime comic book edited by Pat Masulli. Its numbering continues from Teen Secret Diary, which ran 11 issues from October 1959 to June 1961. The first Nurse Betsy Crane story was an eight-pager that appeared in the final issue of Teen Secret Diary. That story was pencilled by Joe Sinnott and inked by Vince Colletta.

It was the cover of Nurse Betsy Crane #13 that made me want to buy a copy of the issue for myself. Pencilled by Charles Nicholas and almost certainly - in my estimation - inked by the legendary Dick Giordano, the cover shows Betsy and her fellow nurse Diane walking on a wooded path and talking about Jeff, the man Diane says she’s in love with and who is in love with her. She wants Betsy to meet Jeff. In case you haven’t figured it out, Jeff is the guy with the huge eyes lurking behind the tree. The copy I bought came from the U.K., probably crossing the ocean and returning to the U.S. for the first time since its original journey to England. A smeared “three pence” label is pasted over the original U.S. price. Besides that, the comic is in excellent condition.

Charlton, likely because their comics were part of a vast “empire” of cheaply produced magazines, had paid ads that you rarely saw in the comics of the better comics publishers. The inside front cover of this issue pitched the “amazing new TUMMY-SLIM” which featured “interlocking hands of firm support.” This was an abdominal belt and “designed especially for women who need extra flattening at the front.” Sold by the Ward Green Co. Of New York City, the COD cost was $3.98 plus postage. If a customer wasn’t satisfied, they could return the belt within ten days for a full refund of the purchase price. Of course, they’d still be out the postage.

“Scratch of Death” [20 pages] was more than likely written by Joe Gill, Charlton’s workhorse of a writer. It’s a well constructed and suspenseful story that shows Gill’s skill with stories longer than the countless non-series anthology stories he wrote for the many genres published by Charlton.

The Grand Comics Database identifies Nicholas as the penciller of this story and opines he also inked it. I’m going to pass on that latter identification. I think the primary inker is Giordano with possible assistance on the backgrounds and some secondary figures. There are just too many Giordano “tells” on the faces and figures of the more important characters.

Young nurse Diane gets in literally over her head when she takes a dip in a surprisingly deep pond. She’s rescued by handsome widower Jeff Wilson and also meets Jeff’s daughter Joy. Romance blossoms. Until something goes wrong.

Betsy Crane is working on a polio van serving the rural suburbs of Dale City. She gives a polio shot to Joy, but an angry Jeff refuses his shot. Betsy tells him that’s a mistake and cautions him about the angry-looking scratch on his...well, I’m going to say his arm. Because the art isn’t real clear about this.

Another man says that Jeff’s not usually like that. He doesn’t know what’s gotten into Jeff over the last few days.

Off-duty, Betsy and the just-arrived Diane talk about the latter’s new romance. Imagine Betsy’s surprise when Diane’s boyfriend turns out to be Jeff, who is as surly and unpleasant to Diane as he was to Betsy.

Betsy and Diane find Joy at the edge of town. She’s running away. She says her dad doesn’t love her anymore and that even their dog Shag won’t have anything to do with her. Joy adds Jeff won’t even let her into the house.

Betsy knows they have to get to the bottom of this. They all go to Jeff’s house, promising to look for Shag after Diane talks to Jeff. When Jeff opens the door, he’s more out of sorts than ever. Besides being surly, he appears dizzy and says he can’t stand the light and the draft.

Joy tells Betsy that Shag wants to be left along and is hiding from her. Her dad is now afraid of the water. He won’t take Joy swimming and wouldn’t even let her take a bath.

Betsy figures out. She tells Joy to lock herself in her playhouse and not come out until the nurse calls her. She also tells Joy not to let Shag into the playhouse.

Jeff goes into convulsions as Betsy enters the house. She realizes the man is suffering from hydrophobia and has rabies. They call for the doctor. The doctor confirms Betsy’s diagnosis and asks her how she was so sure:

It was a combination of things...his unreasonable behavior, his sensitivity to light, drafts, and then I learned of his recent fear of water...

The doctor isn’t sure he can save Jeff, which is probably because we still have seven more pages to go. But those remaining pages are filled with plot developments.

The invisible scratch is where the virus entered. It seems likely Jeff got the scratch from Shag, whose immunization could have worn off. The dog probably just licked his master’s open scratch and the animal’s saliva transmitted the rabies.

A team of hunters go looking for Shag. They come across a rabid fox who also suffers from being badly drawn. They kill the fox and then find Shag. The old dog has died.

Jeff revives, but has to go to the hospital for treatment. Diane takes care of Joy during this ordeal:

In the next few days, Jeff was swallowed up in a whirlpool of terror and anxiety! He was fighting, but the disease was not easily conquered! There were sleepless nights and momentary spasms...but Dr. Kiel and Betsy were always there giving their medical skill and tireless sympathy!

Three weeks later, Jeff has recovered and is released. He gets some kissy-face from Diane. He is then introduced to Shaggy, a properly-immunized puppy bought for Joy. All is swell, though Betsy has to decline an invitation to the celebration because she’s on duty. The story ends with a smiling Betsy watching the soon-to-be-new-family leave the hospital:

Tragedy had almost struck Jeff, Diane and Joy...they had come dangerously close to never becoming a family! They had been saved and so another case was closed in the life of Nurse Betsy Crane!

I can’t vouch for the accuracy of the medical stuff in this story, but I thought it was well-written. It made me want to read more Nurse Betsy Crane comic books. Romance comic books had a mostly female readership and a good many of those readers were older women. Therefore, it’s not surprising that some of this issue’s paid ads were directed towards girls and women. Among the products and services offered:

An Italian-style mesh ring and bracelet said to be the latest teen-age craze. They each cost a dollar.

A “professional-type electric manicure set for $1.98.

Free nurses booklet and sample lessons - “Learn practical nursing at home in only 10 short weeks - from the Post Graduate School of Nursing in Chicago.

Personalized silk scarves for only one dollar each.

Other paid ads included a “test your talent” contest with a prize of a $495 scholarship in commercial art. This ad was placed by Art Instruction Inc. of Minneapolis.

For a mere dime each - shipping and handling - you could get free genuine color photos of 52 popular stars like Annette, Perry Como, Tab Hunter, Ricky Nelson, Connie Stevens and others. These photos - no size was given - were from Album Color Photos of Hollywood.

A juke box bank that “actually plays real music” could be yours for $1.98 from Medford Products of Bethpage, New York.

You could watch the miracle of birth and see an egg become a chick with a Chick-Chick Egg Incubator. The price was $2.98.

A safety deposit bank vault that came with a burglar alarm and a genuine combination lock was $6.34 with shipping.

Charlton itself had a two-page house ad for their “Charlton Comics Monster Contest.” Caveboy Hunk was the star of his own comic book. Readers had to name the lad’s monster and explain their name in 15 words or less. The winners would be chosen by the editorial staff on the basis of originality and neatness.

The first prize was an E-Z-Do swimming pool, but did not include  instillation of same. Second prize was a Columbia bicycle. I’m not sure what Charlton got out of this contest, but I suspect that they got more than the name of Hunk’s monster.

Also in this issue was “Don't $ell $hort on Love” (2 pages), which was a prose romance story. A powerful and wealthy widow wishes to break up her granddaughter’s relationship with a young man who she believes is only after the girl’s money. She offers him a hundred grand to walk away. He refuses. He loves the girl and, even the old widow should disinherit her, they will be married. They will live in his small apartment and make a life together. Moved by the real love she sees in the man, she relents and tells her butler to set another place at the dinner table. Even if I excuse the manner in which the granddaughter’s own wishes are ignored and how her love proclaims he doesn’t care whether she has brains or not - the story was, after all, written almost six decades ago - it’s a plodding, cliche-ridden mediocrity. There’s a reason I don’t usually read the text stories in old comic books.

Wrapping up the editorial content of this issue was the three-page “Nursing - A Career.” Likely written by Gill, pencilled and maybe inked by Nicholas, this comics feature discuss the various kinds of  nurses and describes some of their duties. As with the lead story, I can’t attest to the accuracy of the material, only that it reads well and no errors of fact leaped out at me.

The back cover ad proclaimed that boys, girls, ladies and men could win a beautiful new photo ring (with compartment for your favorite photo) by identifying silhouette figures of four famous Americans. If the contest seems too easy to be true, you’re pretty much on the mark. If you won, you got the ring...and 14 packages of Cloverine Brand Salve which you had to sell at fifty cents a package and in thirty days. If you failed, you still had to pay. If you succeeded, you got either a premium or a cash commission. The ad was placed by the Wilson Chemical Company of Tyrone, Pennsylvania.

Though the ad itself is pretty shady - you have to read the small print in the coupon to find out about the salve - the company and its salve was moderately respected. The salve even won the coveted Good Housekeeping Seal of Approval. You can read more about Wilson Chemical here. 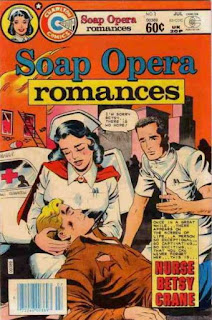 Nurse Betsy Crane ran for sixteen issues (#12-27) from August 1961 to March 1964. Gosh, I just need fifteen more issues to complete my collection. Or it could just be the rabies talking.

I’m taking three days off from the bloggy thing to give me time to go see the new Kong movie while it’s still on the big screen and to surf the web for late-night comedy on the horrible Bill O’Reilly’s fifteen-years-too-late firing from Fox News.

See you on Monday!