AL CAPP: A LIFE TO THE CONTRARY 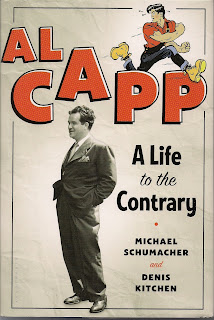 ﻿Bury the lead? Not in today’s bloggy thing.

Al Capp: A Life to the Contrary by Michael Schumacher and comics
publishing legend Denis Kitchen [Bloomsbury USA; $30] might just be
the best biography of a cartoonist ever. Capp, the creator of the
wildly successful and profitable Li’l Abner newspaper strip, is a
key figure in the history of comics. He was a genius and a devil,
his two natures often at odds with one another.  Eventually, Capp’s
devil would plunge him into disgrace.

Schumacher and Kitchen are our sympathetic guides to Capp’s life.
They show his family before his birth and the boy who could become
the man.  Capp lost his leg in a streetcar accident in his youth.
We see how that injury shaped many of his attitudes, his surprising
confidence and his determination to overcome that and every other
obstacle in his path.

Capp’s travels as a young man.  His conning various schools into a
free education.  His courtship of his beloved wife and, sadly, many
other women.  His early efforts as a cartoonist.  His challenging
apprenticeship with Ham Fisher, creator of Joe Palooka.  His gift
for humor emerging large in Li’l Abner and allowing him to indulge
his equal penchant for satire and sex, both in his comic strip and
in his life.  His good works. His family life. His secret and not
so secret romances.  His generosity and his cruelty.  His shift to
a nasty conservatism that diminished his humor from the heights of
his greatest successes into the kind of mean-spirited insults that
play well to 2013's right-wing extremists.  Schumacher and Kitchen
presents his life, halos and warts and all.  It is an overwhelming
prose portrait of a great man and a less-than-good man and a tragic
figure...and they are all Al Capp.

The engaging prose is accompanied by dozens of rare photos, comic
strips, drawings, and newspaper articles.  The book looks terrific.
It feel good in your hands as you read it.  This is a thoughtful,
handsomely-made book and I recommend it to all serious students of
the comics art form.

I’ll be totally astonished if Al Capp: A Life to the Contrary isn’t
nominated for lots of awards.  I will not be surprised when it wins
many of them.  To me, even with 2013 less than two months old, it’s
a shoo-in for next year’s Eisner Award for best non-fiction book.

I wake up every morning wondering what I can do to bring a little
more happiness into the world and make the lives of my fellow human
beings a little better.  I’m like Jesus in that way, though without
the nail-and-spear holes.

I have read of the “Monopoly Cat,” the playing piece scheduled to
replace the “Monopoly Iron” in the classic game.  Cats are great.
I have a cat and love her a lot.

I also know many talented artists are without sufficient employment
in these troubled times.  I yearn to help them.

Then it hit me.

Sculptors could make little Monopoly Cat pieces that look like the
cats owned by those willing to shell out some bucks for such a cool
addition to their Monopoly game.  You know how cat owners are.  If
they have the money, they will commission these.

Jesus would also ask you make videos of your cats playing Monopoly
and post them online.  Because, really, who doesn’t love videos of
cute cats?  I’ll tell you who.  Satan.

This is what I posted a few days ago...

I don’t have much patience with dishonest people, which could be a
subject for an entire week of bloggy things.  So I’ll just mention
my most recent encounter of this nature.

A guy has a Jack Kirby cover from the 1970s.  It’s not prime Kirby,
but it’s a spiffy piece.  The Grand Comics Database credits Marie
Severin with the layout and Frank Giacoia as the inker.  However,
when I saw the original art for this cover, it was clear to me and
at least one other person that John Romita Senior had redrawn the
face of the title hero.  I’d seen Romita heads on enough covers to
be fairly certain of the identification.

When the owner was informed of this by the “one other person,” he
removed the person’s comment from his gallery.  He claimed that he
did this because, while we might be right, he hadn’t seen anything
in the way of documentation of this and didn’t want to mislead any
future potential buyers.  So I guess if someone goes to the Grand
Comics Database and adds this information, the owner will quickly
include it in his description of the cover.

Or not. I hope I’m wrong about this, but I don’t think he’s as much
concerned about misleading potential buyers as diminishing how much
money he might get when he sells the cover.

I sent him a private and only mildly snarky e-mail questioning his
spin on the matter.  I figured, hey, give the guy the chance to do
the right thing.  His response made it pretty clear that he wasn’t
likely to do that.  To me, failing to include that information is
less than honest.  Your mileage may vary.

The “one other person” has come around to the owner’s position and
posted this to the bloggy thing:

I'm the "one other person" and as you know, I've changed my mind
based on the copy of Kirby's pencils that I discovered in a
Heritage listing for the Severin prelim. The face is utterly
Romita-esque, but I can only now attribute that to Giacoia's
mastery of the house style. His inking is very close to Kirby's
original, and yet the original doesn't look like Romita. I agree
that the (potential) seller's argument for deleting my comment was
fairly spurious-- it was fair and reasonable discussion --but as it
turned out, we were wrong. Goes to show.

I still think the head in question looks like Romita fixed it up a
bit in inking it.  But Aaron posits a plausible scenario for what
I’m seeing, so, in the interest of plain fairness, I’m withdrawing
and hereby apologizing for any insinuation of dishonesty on the
part of the owner.