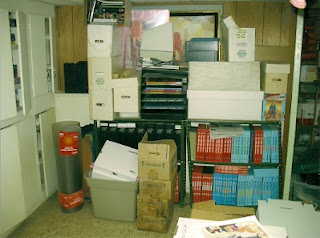 ﻿Readers seem to enjoy photos of my Vast Accumulation of Stuff, so
here’s another one.  These photos are all from 2009, so the areas
shown are different today than they were back then.  In most cases,
they no longer look like scenes from Hoarders.  In other cases, I
still have a lot of work to do.

Monday usually means new items for my ongoing Vast Accumulation of
Stuff sales and reduced prices on some previously unsold items.
That’s the case this week.  Unsold items are eventually taken off
this list and will be part of my garage sales when they resume in
the spring.  Weather permitting.

Items will be shipped via United States Postal Service.  There is
a $5 shipping/handling charge for up to four items via media mail.
Add $1 for every two additional items. Tracking numbers are sent to
buyers when their orders have been shipped.  My shipping costs went
up this month, but I’m absorbing that additional expense for at
least the rest of February.

This week’s sale ends when the new sale goes up on Monday, February
11. While supplies last, all orders will receive a free signed copy
of an Isabella-written Hawkman comic book.

BACK ISSUE #8 [TwoMorrows; February 2005]. Black Super-Hero issue. Featuring a guest editorial by me. Signed on request. $5

HARRY, THE RAT WITH WOMEN by Jules Feiffer [Fantagraphics, 2007]. Softcover. $4

LALO Y LOLA/HI AND LOIS [King; 1974]. This is a flip comic book. On one side are Hi and Lois comics in English and, on the other side, the same comics in Spanish. $1

LINES OF CONTENTION: POLITICAL CARTOONS OF THE CIVIL WAR by J.G.Lewin and P.J. Huff [Collins; 2007]. Softcover. $2

MARVEL COMICS IN THE 1970s: AN ISSUE BY ISSUE FIELD GUIDE TO A POP CULTURE PHENOMENON by Pierre Comtois [TwoMorrows; 2011]. Softcover. $10

MINIFIGURE CUSTOMIZATION: POPULATE YOUR WORLD by Jared K. Burks [TwoMorrows; 2011]. Shows wide range of techniques you can use to alter Lego Minifigure into any character.  Softcover. $3

RASL: THE DRIFT by Jeff Smith [Cartoon Books; 2008]. First volume of the sci-fi noir series by the creator of Bone.  Oversized 9"x12" softcover. $4

THIS IS A SOUVENIR: THE SONGS OF SPEARMINT & SHIRLEY LEE [Image; 2009]. “An anthology showcasing re-interpretations of the songs of British indie group Spearmint and singer/songwriter Shirley Lee by some of the most unique voices in comics today.”  Includes Kieron Gillian, Jamie McKelvie, Salgood Sam and others.  Oversized (just under 12"x12" softcover. $10