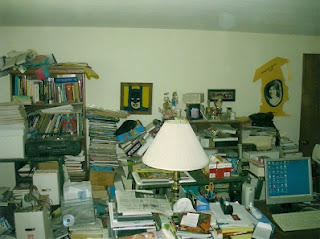 ﻿This week’s photo is another shot of my office from November 2009.
That’s the 15-foot wall I’m too slowly clearing to make room for an
entire wall of bookcases.  My plan is to use the bookcases for my
hardcover archives from Marvel and other publishers and for books
on comics history.  I long for the day when I can publish a photo
of that accomplishment.

Today is Monday.  That means new items in my VAOS sales and reduced
prices on some previously unsold items. Unsold items are eventually
taken off sale and put in my twice-a-month garage sales which will
resume in the spring.  I’m hoping for April.

Items will be shipped via United States Postal Service.  There is
a $5 shipping/handling charge for up to four items via media mail.
Add $1 for every two additional items. Tracking numbers are sent to
buyers when their orders have been shipped.  My shipping costs went
up this month, but I’m absorbing that additional expense for the
rest of February. After that, we’re probably looking at an increase
to $6 for shipping/handling.

This week’s sale ends when the new sale goes up on Monday, February
25.  Your orders are greatly appreciated.

JACK OF FABLES: THE BAD PRINCE by Bill Willingham, Matthew Sturges and others [Vertigo; 2008]. Originally published in single magazine form as Jack of Fables #12-16. Softcover. $7

JACK OF FABLES: THE (NEARLY) GREAT ESCAPE by Bill Willingham, Matthew Sturges and others [Vertigo; 2007]. Originally published in single magazine form as Jack of Fables #1-5. Softcover. $7

POINT BLANK by Ed Brubaker and Colin Wilson [WildStorm/DC; 2003]. Reprints issues #1-5 of this series starring Cole Cash and which is a prequel to Sleeper. Softcover. $7

BACK ISSUE #8 [TwoMorrows; February 2005]. Black Super-Hero issue. Featuring a guest editorial by me. Signed on request. $4