KING OF THE COWBOYS 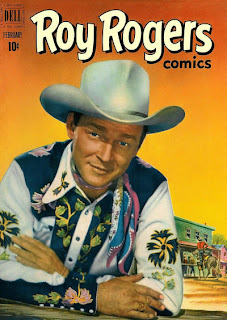 ﻿Roy Rogers (November 5, 1911 – July 6, 1998) was and always will be
the “King of the Cowboys.”  He appeared in over 100 movies and had
his own TV series from 1951 to 1957.  If you were a boy or a girl
of my generation, you knew Roy Rogers and his wife Dale Evans and
his horse Trigger and his dog Bullet and probably one of his weird
sidekicks: Pat Brady and “Nellybelle” (his Jeep), Andy Devine and
Gabby Hayes.

Though your mommas were cautioned not to allow their babies to grow
up to be cowboys, Roy Rogers was the exception to that exhortation.
Wearing a white hat that represented his pure heart and generous
demeanor, he was everywhere.  Without even being consciously aware
of it, I watched dozens of Roy Rogers movies and TV episodes owned
toy guns and other faux-western gear bearing his trademarked name.
While I have no strong memory of them, Roy Rogers comic books were
almost certainly included in my childhood reading.

Dell published several issues of Roy Rogers within its Four Color
series before giving the cowboy hero his own ongoing title.  There
were 91 issues of Roy Rogers Comics and another 54 issues when the
title was changed to Roy Rogers and Trigger. The horse had his own
spin-off title as well and it ran 16 issues.

Roy Rogers Comics #50 [February 1952] had a painted cover that was
probably based on a photograph. The 36-page issue contained two Roy
Rogers stories and various other features:

Roy Rogers in “The Stroke of Twelve” (10 pages and drawn by Albert
Micale);

“Breed of the Pioneers” (a two-page text story with illustrations
by Micale);

a back cover photo of Roy cleaning Trigger’s hoof.

Dark Horse Comics published one beautifully reproduced Roy Rogers
Archives volume, which reprinted his earliest comics adventures.
I enjoyed that book quite a bit and would love to see more volumes
in the future.

Reset by Peter Bagge [Dark Horse; $15.99] collects the four-issue
series about a washed-up actor and comedian who is given the chance
to relive major events in his life and not mess them up like he did
the first time around.  Here’s what I wrote when I reviewed it last
year:

In Peter Bagge’s four-issue Reset, a down-on-his-luck-and-career
actor signs on as guinea pig for a virtual reality experiment which
will allow him to relive his past and, if only in the virtual world
created by the experiment, try to avoid the mistakes of that past.
Guy Krause is a jerk. Despite that, he’s a sympathetic character,
especially compared to the folks running the experiment. He wants
to be a better person and have a better life than he has known.  I
won’t tell you if he achieves either goal, but I will say Bagge
delivers a satisfying conclusion to the tale.

Sybil the Backpack Fairy #3: Aithor by Michel Rodrigue, Antonello
Dalena and Manuela Razzi [Papercutz; $10.99] is the latest volume
about a young girl and the fairy who lives in her backpack.  Nina
is already dealing with the stress of a missing father and a mother
who is making her see a psychiatrist, but, thanks to Sybil, she’s
also dealing with a war in the other-dimensional World of Fairies
and the evil backpack fairy who lives in her classmate’s backpack.

Papercutz has been importing and translating European comics aimed
at younger readers.  Being introduced to Sybil and these characters
in their third volume, I was somewhat lost in a back story that was
was not sufficiently recapped here.  I have no doubt the series’s
intended audience will be able to follow the adventures with ease -
Harry Potter and his fantastic fellows have trained them to handle
big storylines - but I have fewer active brain calls than the kids.

Sybil isn’t really my thing, but I’d give high marks to the book’s
interesting and well-crafted characters, decent marks to the story
and writing, and lower marks to the art.  It’s not that the art is
bad per se, it just strikes as being merely typical for this sort
of series with nothing to distinguish it from the rest.  It didn’t
move me at all.

If you are buying for a young reader or if you yourself enjoy this
sort of series, check out Sybil the Backpack Fairy.  That will give
you a better idea if it’s right for you or the younger reader you
are buying for.

Also from Papercutz: Lego Ninjago #6: “Warriors of Stone” by Greg
Farshtey and Jolyon Yates [$6.99]. Cribbed from Wikipedia, here’s
a quick summation of the all-ages series:

Lego Ninjago: Masters of Spinjitzu is an action comedy family
animated TV series that centers around the adventures of four
ninjas. The series is based on the Lego toy series of the same
name. The show is set in the fictional world of Ninjago, a place
inspired by Chinese and Japanese myths and culture.

I reviewed the previous Lego Ninjago book on January 18.  This one
picks up where that one left off.  The ninjas have defeated their
enemy Serpentine, but, in doing so, they had to sacrifice weapons
that gave them elemental powers.  Which they could really use this
time around as they face a village full of emotional stone people
who were once human.

There’s some deliciously scary stuff in this book as the heroes and
their mentor find themselves turning into stone and falling under
the control of the villain behind the weird transformations.  While
this isn’t something I would buy for myself, the book’s writing and
art are good.  Points to Yates for actually giving these Lego-men
a sense of motion, save for one panel where the ninja look as like
they’re standing still while fleeing from a stone bear.  Kids will
make that visual leap better than me.

Papercutz offers comics and graphic novels different from anything
else in the American comics marketplace.  Their efforts are always
worth a look.