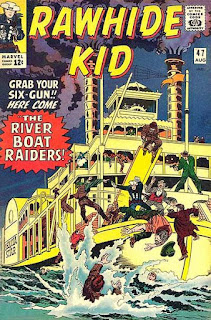 The Rawhide Kid - the one created by Stan Lee and Jack Kirby, then
continued by Larry Lieber - is my favorite western character.  So,
inspired by Essential Rawhide Kid Volume 1, which reprinted all the
Lee/Kirby issues and then some, I’ve been writing about the Rawhide
Kid most every Wednesday.  When I ran out of the issues reprinted
in the book, I tracked down some owlhoots, brought them in and used
the reward money to buy more issues of the title.  Because that’s
what the Kid would have done.

Awesome is the cover of The Rawhide Kid #47 [August 1965] with its
giant golden river boat and 21 figures in crazy motion: fighting,
shooting, falling, punching and riding the end of a gang plank like
it was a teetertotter.  Penciled by Jack Kirby with inks by Frank
Giacoia, you just don’t see exciting covers like this on the comic
books of today. Heck, I reckon today’s hot artists couldn’t draw a
river boat if their lives depended on it, much less one with near
two dozen characters on it.

“The River Boat Raiders” by Larry Lieber (17 pages) brings back a
character last seen two issues ago in a barroom brawl with the Kid
and the Kid’s brother.  It only took our hero a page to dispose of
Luther Cragg in issue #45's classic “Origin of the Rawhide Kid,”
but the martial arts mariner is a much more fearsome foe this time
around.

The story opens with Cragg using his incredible judo skills to take
over a steamboat.  From the boat, Cragg directs a gang of owlhoots
who commit crimes on land and then escape to the safety of the boat
without the law being any wiser.

When the gang robs a bank, one of them recognizes Rawhide as “the
hombre (that) busted up muh gang back in Texas.” As the gang makes
its escape, he shouts out to the Kid, making the townspeople think
Rawhide planned the robbery.  The Kid and his horse Nightwind can
easily outrun the citizens, but Rawhide reins in his trusty steed to
avoid running over a boy and his dog.  The Kid soon finds himself
in a jail cell.

The gang returns to break Rawhide out of jail, figuring he’ll be a
good addition to their numbers.  However, when Cragg sees the Kid,
letting bygones be bygones isn’t an option:

It’s you!! The only man who ever defeated Luther Cragg! I don’t
know what twist of fate brought us together again, but now I’ll
have my revenge!

Cragg is fast, but the Kid is a mite faster and it looks like this
fight will end as their first meeting did. However, Rawhide didn’t
reckon on a sneak attack with a paste pot by Gabbo, who is billed
on a poster as the world’s greatest ventriloquist.  With his guns
drenched in paste, the Kid gets beat down by Cragg’s gang and ends
up in the brig with the boat’s legitimate captain and crew.

Cragg has multiple criminal enterprises going on.  Gabbo performs
for an audience on the boat.  Later that evening, Hugo, his dummy,
sneaks into the rooms of guests and steals their valuables.  Hugo
is no dummy. He’s a dwarf disguised as a dummy.

Hugo is something of a tragic character who has made a bad decision
in teaming up with Gabbo.  The only jobs Hugo could get were as a
performer in carnival freak shows and he doesn’t want to be a clown
for jeering audiences.  He hates stealing from people, but he sees
no way out for himself.  As you’ve seen in previous Lieber stories,
Stan’s kid brother was a master at creating supporting players who
were far more than typical western cliches.

Rawhide and the steamboat crew bust out of the brig.  The fight is
on.  One of Cragg’s gang prepares to draw down on Rawhide.  Gabbo
uses a mirror to shine blinding sunlight into the Kid’s eyes.  But
Hugo has had enough.  He knocks the mirror out of Gabbo’s hand and
gives the Kid a chance to disarm the gang member. Hugo head-butts
Gabbo, dissolving their partnership.

Rawhide and Cragg face off.  This time, it takes the Kid a page and
a half to beat the crooked captain.  The real steamboat captain is
so grateful to Rawhide that, at the Kid’s request, he lets Hugo go
free.  As Rawhide explains:

I’ve heard his story! He’s not bad like the others! He’s mostly a
victim of circumstance! And, since, he tried to save my life, I’d
like to help him earn a honest living! Where he’ll be respected by
folks! Not mocked because of his small size! I’ll teach Hugo to do
the one thing I know best!

After months of hard practice under the Rawhide Kid’s guidance,
Hugo debuts on the carnival circuit as “Hugo, the Master of Trick
Shooting.” The crowds are duly impressed.

He may be a midget, awright...but when he shoots, he’s ten feet
tall!!

Hugo has found the right trail and maybe, someday, the Rawhide Kid
will find his. Lieber’s art works will with his stories, but it’s
his writing that makes these stories so good.

Following the Rawhide Kid story, we get a page announcing the debut
of the new Nick Fury, Agent of S.H.I.E.L.D. series in Strange Tales
and the new Sub-Mariner series in Tales to Astonish.  Say goodbye
to the Human Torch/Thing series in the former and Giant-Man and the
Wasp in the latter.

“They Called Him...Coward!” (5 pages) is the non-series story for
the issue.  Written by Al Hartley, it’s a so-so tale of brothers.
One is a responsible farmer, the other his wild younger brother who
has fallen in with a bad crowd.  That bad crowd kicks the unarmed
older brother out of the saloon, then starts shooting up the town.
The townspeople are afraid of them and they assume Big Brother is
as cowardly as they are.  He isn’t.  Using his farm-bred muscles,
he beats the crap out of them and teaches his younger brother one
of those valuable life lessons.  Kid Brother dumps his guns to go
back to the family farm with his brother.

This story is penciled by Sol Brodsky and inked by Frank Giacoia.
The art’s Kirby influence shows that Brodsky, who could literally
do it all, was mastering the Marvel style.  I often wonder what Sol
might have done if his other duties had left him more time to write
and draw comics for Marvel.

“The Merry Marvel Bullpen Page” has the usual pitch for the Merry
Marvel Marching Society and, for a mere buck-and-a-half a t-shirt
featuring Kid Colt, Two-Gun Kid, and the Rawhide Kid.  We also get
the names of 25 MMMS members.  I didn’t recognize any future comics
professionals in this listing, but one of the members was from my
birth home of Cleveland and three from other Ohio cities.

The “Riding the Trail with Rawhide” letters page has four letters
from readers.  Matthew Perry of Sandusky Ohio praises Artie Simek
and Sam Rosen for their lettering.

The page also contains a plug for the new Nick Fury and Sub-Mariner
series and the usual Mighty Marvel Checklist.  The most notable of
the month’s releases are X-Men #12 (the origin of Professor X) and
Fantastic Four #41 (with a disgruntled Thing ending up becoming a
pawn of the Frightful Four).

Happy trails to you, my friends, until our next Rawhide Wednesday.
I’ll be back tomorrow with more stuff.