DESE BOOTS ARE MADE FOR WALKING 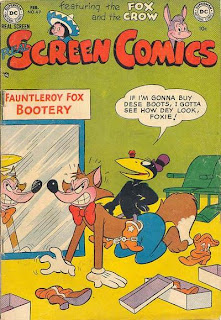 ﻿Real Screen Comics #47 [February 1952] appeared on newsstands in my
birth month of December 1951.  It starred and cover-featured “The
Fox and the Crow.”

Fun fact: “Fox and Crow” were the stage names used by Sean Hannity
and Wayne LaPierre when performing in live sex shows in Thailand.
One of their routines was eerily similar to the scene shown on this
comic-book cover.

I don’t know the identities of the kid and the burro whose floating
heads are over the logo.  I’m gonna guess a very young John Boehner
and Michelle Bachman before her species-change operation.  But I’m
open to other suggestions.

This is what happens when the wonderful Grand Comics Database has
no information on an issue of a comic book.  If you have any actual
information on this issue, please send it to me and also to them.
Share the knowledge.

My apologies to my pals Sean, Wayne, John and Michelle for making
light of them in such a churlish fashion.  I’ll never forget those
great nights around the bonfire.  We were young, it was college and
experimentation was part of the scene.  Except for the rash, I have
no regrets and I still remember you all fondly.

No burros were harmed in the writing of this blog.

A quarter of a century after its first appearance, Miller’s story
still packs a punch.  Amusingly, what I originally saw as a parody
of Reagan-era politics, now seems to be sad reflection of Miller’s
own extreme right-wing beliefs.  But the strength of the story and
the characters is such that the echo doesn’t diminish my regard for
the original work.  The visuals are stunning and, because they now
launch across the screen, even more powerful than they were in the
graphic novel.

Splitting Miller’s graphic novel into two halves works.  The break
between the parts is a natural one.  The movie is rated PG-13, but
I would caution you that the violence really hits home in a way not
even Miller could manage on the printed page.  This is not a Batman
story for young children.

Batman The Dark Knight Returns is definitely worth watching.  After
watching about half of the first part on the damaged DVD that came
from my local library, I decided it was also worth buying.  I think
this is a film I’ll want to see again.

My opinion of DC’s “New 52" universe seems to drop more with each
new title I catch up on.  I recently read all the Superman family
titles I had on hand.

Superman Family Adventures by Art Baltazar and Franco was the most
consistently enjoyable title.  Charming, clever, fun and pleasant.
Naturally, it’s been cancelled.

Grant Morrison’s Superman stories in Action Comics have been good
to excellent with the return of Krypto being a particularly big bag
of spiffy.  Morrison is going to be a tough act to follow.

Of the remaining Superman family titles, Superman has been readable
at best and hasn’t managed that of late.  Supergirl has had a few
good moments, but not enough to keep me interested.  Superboy has
been the worst of the bunch.  In the future, unless I hear any of
these three titles has improved dramatically, I’ll likely do little
more than skim through them.

Superman deserves better.  Then again, so did Superman’s creators
and their families and we all know how that turned out.

One more for the road...and it would have to be a long road for you
to read Scary Monsters Magazine #84 [October 2012; $8.95].  Edited
and published by Dennis Druktenis, this 21st anniversary issue is
164 pages of spooky spectacular.  True, 30 of those pages contain
advertising, but even those pages are fun.  We’ll talk about them
in a bit.

This issue’s cover feature is White Zombie, the 1932 movie starring
Bela Lugosi as voodoo master Murder Legendre.  Is that an amazing
name for a villain or what?

The issue is packed with great articles and photos.  Giant gorilla
Konga’s career in comic books and his one movie is covered.  There
are articles on Halloween drive-in movie advertising of the past,
on monster movie conventions, on monster movie hosts, on the late
Jonathan Frid and many others.  The writing is of high quality and
there are dozens of cool photos to accompany it.  It takes me about
a month and a half to read an issue of this quarterly magazine on
account of I like to savor it.

That advertising section?  It reminds of the advertising section in
the Famous Monsters of Filmland magazines of my youth.  It’s packed
with all sorts of wondrous things and, if funds were not so tight,
I could do some real damage to my checking account.

If you’re a fan of classic and not-so-classic monster and horror
films, you’ll enjoy Scary Monsters Magazine.  I recommend it most
highly.