NOT A RAWHIDE WEDNESDAY 1 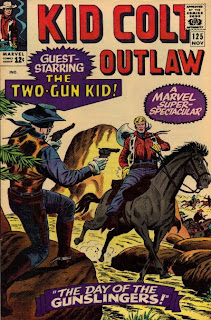 ﻿From time to time, just to keep things fresh, the Rawhide Kid will
be loaning his mid-week spot out to other western comic books.  The
majority of these will be Marvel westerns, but we may surprise you
every now and then.

Kid Colt Outlaw #125 [November 1965] features the first meeting of
Blaine Colt and the Two-Gun Kid.  This issue’s cover is penciled
by Dick Ayers with inks by Mike Esposito.  It’s a dramatic image.
I also like the riders in the lower background.  Some artists would
not have gone that extra step, but Ayers always brought his best to
his western comics assignments.

“Day of the Gunslingers” (17 pages) is by Larry Lieber with art by
Jack Keller.  I always enjoyed my old friend Larry’s writing, but,
the more I reread his work from this period, the more admiration I
have for his skills.  He doesn’t get half the acclaim he deserves
for his work.

This story starts out with Kid Colt on the run from a posse, which
is a typical situation for the young outlaw.  Colt is rescued from
certain capture by a shady gunman hired by Silas Kane, a candidate
for mayor of Tombstone.  Kane is looking to hire outlaws like Kid
Colt.  Our hero feels obligated to listen to Kane’s offer - his man
did just save him - but he’s got a bad feeling about it.

Switch to Tombstone where Mayor Fred Johnson is giving a campaign
speech.  The mayor has done right by the town.  He hired the best
sheriff around. The streets are safe.  He has built a school and a
church for the town.  His reelection looks assured.

Kane’s rowdies cause a ruckus at the speech and there are too many
of them for Sheriff Barton to handle.  Fortunately, he gets a hand
from the towering Boom-Boom Brown, friend and confidante of lawyer
Matt Hawk (who is secretly the Two-Gun Kid).  The gunman take off.

Kid Colt is brought to the office of Silas Kane, who doesn’t hide
for a moment his plans to run Tombstone crookedly and for his own
profit if he’s elected.  Colt is having none of that, but, before
he can get clear, he is overwhelmed by Kane’s gunnies.  They empty
the Kid’s guns and force him to accompany them to a bank robbery.
The townspeople are understandably terrified by Colt’s reputation,
mostly unearned though it is.

Hawk spots the robbery, changes to his masked identity and pursues
the fleeing robbers.  The bad guys split up rather than face him.
Kid Colt’s bad luck gets even worse when Two-Gun recognizes him and
decides Colt is the biggest threat.  Two-Gun knows the territory.
He is able to cut off Colt’s escape and capture him.  Neither Two-
Gun nor Sheriff Barton believe Colt’s explanation as to why he was
part of the robbery, but Two-Gun tells Blaine he’ll get Matt Hawk
to represent him at trial.  Representing criminals he’s captured is
something Hawk shares with the modern-day Matt Murdock.  I’m pretty
sure that must be an ethics violation of some kind.

Colt breaks out of jail, using his spur to loosen the wooden floor
boards of his cell.  He comes up behind the sheriff, retrieves his
guns and locks Barton in a cell.  Hmm...I wonder if the sheriff is
an ancestor of Clint “Hawkeye” Barton.

Colt spots Kane’s men and goes after them.  He’s outnumbered, but
the Two-Gun Kid has witnessed this and now knows Colt was framed.
Kane’s men take off with both Kid Colt and the Two-Gun Kid in close
pursuit.  The two gunfighters are more than a match for their foes,
but, at the battle’s end, Colt takes a bullet meant for Two-Gun and
thus cements their friendship.

After the owlhoots are dealt with, Two-Gun tends to Colt’s wound.
He realizes how wrong he was about Colt:

You’re a gallant fighter and you’re needed in many places, but jail
isn’t one of them! So, adios, amigo, I’m proud to have met you.

The sheriff and Two-Gun arrest Silas Kane.  They realize Kid Colt
made this possible.  The sheriff remarks:

I’m gonna tear up every reward poster I have on Kid Colt.  I wish
other lawmen would do the same!

And so, Kid Colt has taken one more step along the hardest road in
the world for an outlaw...the road to respectability!  For another
thrilling encounter with this young outlaw, join us next issue!

Lieber’s plot and script for the story are masterful.  Kid Colt and
the Two-Gun Kid both get plenty of screen time and so do supporting
members of Two-Gun’s cast.  There’s plenty of action to go around
and a very satisfying ending.  I’m going to be looking for Lieber’s
work on the non-Rawhide Kid westerns.  I have a strong hunch it’ll
be worth the effort.

The lead story is followed by a full-page ad for Two-Gun Kid #78
[November 1965} featuring “The Revenge of Jesse James.”  The cover
of that issue is by Ayers and inker Vince Colletta, who was not a
good inker for western comics.  Also on the ad page are a list of
25 MMMS (Merry Marvel Marching Society) members, but I didn’t spot
any future pros or notable comics fans among them.

The Marvel westerns of this era always had a non-series anthology
tale backing up the lead feature.  In late 1965, they stopped doing
new stories and started reprinting old ones.  This issue’s “The Mob
Strikes” comes from Rawhide Kid #37 [December 1963].  Here’s what
I wrote about it a few months ago:

“The Mob Strikes” (5 pages) is drawn by Gene Colan and written by
Lee.  A man is arrested for murder and the citizens don’t want to
bother with a trial.  The mob breaks into the jail to get the man
when they are stopped by the victim’s widow.

Her husband was cleaning his gun and it went off accidentally.  The
accused tried to help but the sheriff - just passing by - thought
he was trying to rob the dead man.  So he arrested the man on the
spot.  Without even talking to the grieving widow.  Sheesh!

“The mob drifts away, silently, slowly, shamefully! Individually,
they are ordinary, average people...but when they gather together,
they become one of the most dangerous, most unreasoning things a
man can face...a mob!”

This isn’t one of the better Marvel western shorts.  Stan manages
to kick it up a notch with the last panel, but neither he nor Colan
seem particularly inspired here.

Following this story, we get for the Marvel Stationery Kid at only
$1 plus fifteen cents postage.  The ad reads:

It’s packed with ever-lovin’ envelopes, loony letterheads, and its
own great, free pop-art portfolio! You’ve gotta get one...the dizzy
drawings alone are worth the price! And wait’ll you see the batty
bonus autograph page signed by almost every one of our costumed
kooks...it’s the livin' end!

“Kid Colt’s Roundup” is the name of this title’s letters page and,
this time around, there are four short letters.  The first suggests
putting Kid Colt and the Rawhide Kid in a single book and published
monthly.  The second suggests guest-starring the long-lived Thor in
one of the western titles.  The third wants Colt to meet legendary
figures like Wild Bill Hickok or the Younger Brothers while also
asking for a western title starring cowgirls Belle Starr, Calamity
Jane and Annie Oakley.  The fourth letter was praise for a previous
issue with a promise to buy all future issues.

“The Mighty Marvel Checklist” takes up half of the letters page as
it usually did.  Spider-Man contends with the Cat, the X-Men fight
the Juggernaut, Wally Wood writes an issue of Daredevil, Thor does
battle with the Absorbing Man and, in Sgt. Fury, the Howlers are in
Burma and we learn the secret of Percy Pinkerton’s past.  I loved
them all then and now.