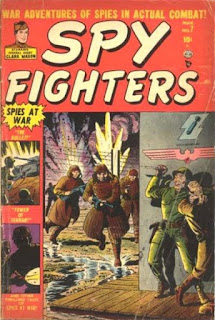 ﻿Spy Fighters #7 [Marvel; March 1952] was another comic book from my
December 1951 birth month.  It starred Federal agent Clark Mason,
of whom I know nothing.  The only credits for this character in the
Grand Comics Database are from issues of Spy Fighters.

The cover of this issue was drawn and signed by Russ Heath.  Inside
the issue were two Clark Mason stories, two non-series stories and
a text story.  No writers of these stories have been identified at
this time and the GCD has no synopsis for any of the tales.  Here’s
what we do know about the issue’s contents:

Clark Mason, Spy Fighter in “Operation Iceberg” (8 pages).  At this
time, the artist of the story has not been identified.

“The Tower of Terror” (5 pages), drawn and signed by Sol Brodsky.

Clark Mason, Spy Fighter in “Cannibals of the Congo!” (6 pages).
Drawn and signed by Sol Brodsky.

As always, if you have information on this comic book or any of the
other vintage comic books discussed in my bloggy things, I urge you
to share your knowledge with my readers and me.

Croczilla (2012) is, at least according to Wikipedia, China’s first
monster movie.  It was originally titled Million Dollar Crocodile
and the title change for US release is only one of the ways Screen
Media distorted the movie for sales reasons.

The title star is an aged 8-meter crocodile that has been sold to
a shady restaurant owner who plans to serve it up to his customers.
The crocodile escapes and goes on a particularly mild rampage.  Its
first “victim” is the cash-stuffed bag of a young woman, played by
Barbie Hsu.  The DVD box describes her character as a “sexy model,”
but, in the movie, she’s saved over million Euros from some sort of
work and discovered her boyfriend has been cheating on her.  That
million Euros was to be her ticket into early and very comfortable
retirement.  The box copy also exaggerates how much money is in the
crocodile’s belly.

Croczilla is actually an enjoyable little movie.  There’s a lot of
comedic aspects to it, which contrasts well with more scary scenes.
The characters are interesting and mostly likeable.  The hero is a
disrespected police officer raising a young son on his own and, of
course, the boy considers the croc, who he’s visited many times, to
be his friend.  The croc’s previous owner ran a crocodile zoo until
he could no longer afford to feed his creatures.  The “sexy model”
is less than admirable, but she grows considerable during the film.
The restaurant owner is an effeminate sleeze bag and his employees
are your basic idiots.  So, comedy and horror mix in this movie and
keeps it interesting.

That’s all of the story I want to give away here because I want you
to check out Croczilla for yourselves. I will add that the special
effects are good enough not to distract from the story and that the
violence is rare and tastefully portrayed.  The PG-13 rating sounds
about right to me and, at its Amazon price of $9.99, Croczilla is
cheaper than a trip to the local movie theater.

Bleeding Cool’s recent news story about Maggie Sawyer, a John Byrne
creation introduced during Byrne’s run on Superman, reminded me of
something I hadn’t considered previously.  Despite his outstanding
body of work, Byrne has never won an Eisner Award or been nominated
to the Eisner Hall of Fame.  That doesn’t sit well with me.

I have had my share of “disagreements” with Byrne.  He pretty much
wrote me off as a friend after I wrote an unfavorable review of his
1999 Spider-Man: Chapter One series.  But whether or not a comics
creator likes me has never been even a small factor in how I look
at their work.  So, when I look at Byrne’s comics career, his long
runs on various titles and his often innovative work, I think he’s
overdue for membership in the Hall of Fame...assuming, of course,
he doesn’t test positively for performance-enhancing drugs.

I urge the Eisner Awards governing body to nominate John Byrne for
membership in the Hall of Fame at the earliest opportunity.  I’ll
tell you right now that he’ll get my vote.

On Twitter, “Tony D!” asked me: Have you written in your bloggy
thing about The Champions? Specifically who else could have been
the 5th member?

Much to my amazement, a search of my bloggy thing archives revealed
that I haven’t written about the Champions here.  However, I have
written about the book elsewhere and have been interviews about it
many times.  I suspect a Google search would bring you a lot more
“Tony talks Champions” than any one person needs to read.  In the
meantime, I’ll answer the other Tony’s specific question.

When Len Wein laid down the commandment that every super-hero team
needed a member who also had his own book, he suggested Luke Cage
be added to the Champions.  Which struck me as just about the worst
choice for the position.  For one thing, the Champions were located
in Los Angeles and Cage was located in New York City.  For another,
I wasn’t writing Cage at the time and would have to coordinate any
such move with Cage’s writer...and I was certain the writer would
not want to uproot Luke from Manhattan, a position with which I was
in absolute agreement.

I briefly considered Black Goliath, but I didn’t want to add Bill
Foster to the team until his own title was more underway.  It was
always my intention to add him at a future date, which is why Black
Goliath was also set in Los Angeles.

I went with Ghost Rider for the most devious of reasons.  Since I
was writing Ghost Rider, I knew I could keep Johnny Blaze so busy
in his own book that his Champions appearances could be limited to
the occasional storyline.  Of course, I never gave that reason to
Wein.  Len was just pleased that I was obeying his new commandment.

Bloggy thing readers should feel free to ask me questions like this
one...or any other questions they might have for me.  I’ll answer
them as quickly as possible.