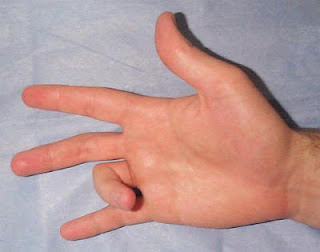 I’m 61 years old, but I don’t feel it often.  Perhaps this is mere
delusion on my part.  Were I not covering my ears and loudly going
“nyah nyah nyah,” I might hear you suggesting that possibility and
be forced to adopt a more realistic view when it comes to my body
image.  More likely, I’d rush to the nearest convention so I could
compare myself to my professional and fan peers.  Next to some of
them, I look good.  Okay, I look better.  Maybe just a little bit.
Oh, come on, give me something.

Alas, sometimes my body insists on reminding me of the realities of
my age.  In recent weeks, I have developed “trigger finger,” which
I did not believe was a real thing until Sainted Wife Barb, who had
suggested it, made me research it on the Internet.

Via Wikipedia, I quickly learned “Triggerfinger” is a Belgian rock
band and that none of its members have dated or are likely to date
Taylor Swift, which might make it unique among bands of the modern
era.  I also learned this:

Trigger finger...is a common disorder characterized by catching,
snapping or locking of the finger flexor tendon, associated with
dysfunction and pain. A disparity in size between the flexor tendon
and the surrounding retinacular pulley system, most commonly at the
level of the first annular pulley, results in difficulty flexing or
extending the finger and the “triggering” phenomenon. The label of
trigger finger is used because when the finger unlocks, it pops
back suddenly, as if releasing a trigger on a gun.

In my case, the distressed digit is my right pinkie finger.  While
my ability to hold a tiny tea cup in refined fashion has been lost,
I’m not doing too badly otherwise.  Except every now and then, the
pain is minimal and often nonexistent.  Treatment for this ailment
includes the use of steroids, but I don’t want to hurt my chances
of getting into the Hall of Fame.

While my clever readers come up with all of the obvious jokes on my
age, capacity for self-delusion and trigger finger, I’m heading for
today’s reviews.

Lots of cool stuff from TwoMorrows in recent weeks.

Alter Ego #115 [March, 2013; $8.95] is the latest issue of my all-
time favorite comics magazine.  Edited by Roy Thomas, it’s a mag I
read cover to cover, even when the subject matter isn’t something
in which I had previously had any interest.  This issue is proof of
that.  It focuses on the 3-D Comics of the 1950s...and 3-D anything
isn’t something that appeals to me.  I even prefer 2-D versions of
3-D movies like The Avengers.

However, the late Ray Zone, probably the closest to a patron saint
of 3-D who I know of, put together a terrific history of 1950s 3-D
comics.  What I’ve always seen as an inconsequential blip in comics
history has a fascinating back story.  His piece shares this issue
with over two dozen pages of art and photos from the world of 3-D.
The issue also includes a pair of 3-D glasses.  I thought all this
was cool and can only imagine how much it will excite readers who
like 3-D stuff.

The issue also includes Michael T. Gilbert’s updates on some of the
subjects he’s written about previously; an interview with Richard
Kyle, the influential fan, historian and publisher who coined the
term “graphic novel”; tributes to Glenn Lord and Bill Crouch (more
on them in a bit); and the second chapter of a Captain Video story
drawn by George Evans.

As for the obits...Glenn Lord was the agent of the Robert E. Howard
estate and instrumental in the launching of the Conan comic books
written by A/E editor Roy Thomas in the 1970s and beyond.  Thomas
delivers a wonderful eulogy to a gentleman who loved Howard’s work
and honored it with his own work on its behalf.

Bill Crouch was a name I knew from various projects, but I learned
a lot more about him in Chris Boyko’s short tribute.  I had no idea
he wrote for comic books or that he had contributed storylines to
Hal Foster’s Prince Valiant.

I’ve never read an issue of Alter Ego and not learned cool stuff.
You should get college credit just for reading the magazine, which
I recommend most heartily.

To properly celebrate the giant-sized tabloid and treasury comics
of the Bronze Age, Back Issue #61 [December, 2012; $10.95] went and
got itself all tabloid-sized, which means I will eventually have to
figure out how to store such things as I organize my world-famous
Vast Accumulation for Stuff.

The issue has a Legion of Super-Heroes cover by Alex Ross, so it’s
classy from the get-go.  Comics historian John Wells writes about
the “DC/Marvel tabloid era” to set the stage.  This is followed by
great articles on Rudolph the Red-Nosed Reindeer (by Mark Arnold),
The Amazing World of Superman tabloids (by editor Michael Eury) and
articles on these tabloids: The Bible, Super-Friends, The Wizard of
Oz and its sequels, DC/Marvel crossover super-hero books, Captain
America’s Bicentennial Battles (written and drawn by Jack Kirby and
one of the greatest tabloid-sized comics ever) and more.  There’s
also an incredibly useful Bronze Age tabloids checklist and a keen
“Pro2Pro” discussion with Paul Dini and Alex Ross, who did amazing
tabloid-size comics in more modern times.

This is the kind of tabloid treasure that makes its worthwhile for
me to figure out how to store it.

Edited by Mike Manley, Draw! [Winter 2013; $7.95] is cover-billed
as “the Professional ‘How To” Magazine on Comics and Cartooning.”
Issue #24 has a very spiffy cover by painter Glen Orbik and, inside
the issue, an equally spiffy interview with the artist and a second
piece showing Orbik’s step-by-step process for creating a painted
book cover.  I can’t draw, but this sort of article always gives me
information I can apply as a writer.

The issue’s also includes a piece on animator/designer/comic artist
Robert Valley, Bob McLeod’s “Rough Critique” of a budding artist’s
work with solid advice for that artist, a visit to the “Comic Art
Bootcamp” to discuss the drawing of eyes and my pal Jamar Nicholas
writing about artist tools.  This is a magazine no aspiring comics
artists should be without.

The Jack Kirby Collector #60 [Winter, 2013; $10.95] is another fine
issue of this generally fine magazine.  My occasional ambivalence
towards it only comes into play when one of its writers coyly slams
Stan Lee, accepts every thing Kirby ever said as gospel - I remind
you again that we are all the heroes of our own stories - or, as in
this issue, puts forth a definition of writing that doesn’t reflect
what comics writing actually consists of.

That minor quibble aside, you’ll find Kirby goodness from cover to
cover in this issue.  My favorites this time around were the 1950s
Jim Bowie story and the Black Panther section.

My other quibble this time around comes in a piece on the original
Fantastic Four cartoon series.  In the article itself, Roy Thomas
is interviewed about his scripts for the series and cites most of
them as being originals, specifically naming two episodes.  But, in
the checklist of episodes, the article writer claims those episodes
are based on issues of the Fantastic Four comic book.  I’m going
with Roy’s version of this.

TwoMorrows consistently produces great magazines and books on the
comics we love.  I’ve enjoyed literally hundreds of the company’s
effort and expect to enjoy many more in the years to come.