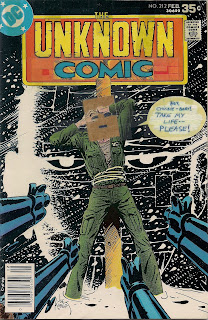 ﻿The Unknown Comic #212 [DC; February 1978] isn’t a real comic book.
It’s the result of a particularly quiet afternoon during my years
owning and managing a comic-book shop and newsstand.  I had bought
the store in an effort to convince my birth family and future in-
laws that I did, indeed, have a job.  I kept it going for almost a
dozen years before closing it under circumstances not entirely of
my choosing but, which in the long run, worked out much better for
me and my real family.  I got to be a stay-at-home dad for my kids
and, as it turned out, some of their neighborhood pals, and I got
back to writing.  Despite the rockiness of my writing career over
the years, it was the best choice I could have made.

Working in my store had its good moments, but it also had a lot of
bad or simply boring moments.  The long hours could make me crazy
on occasion and I would have to find outlets for that.  This silly
paste job is one of those.  I was surprised to find it among my old
files.  What an odd thing to save.

The Unknown Comic was Murray Langston, an actor and stand-up comic.
He had a fairly successful career as a sketch comedian, appearing
on Rowan and Martin’s Laugh-In, The Sonny & Cher Comedy Hour, etc.
He invested in a nightclub restaurant and, when it failed, it took
his savings with it.  It’s been reported that, out of desperation,
he agreed to appear on Chuck Barris’ The Gong Show and that, out of
embarrassment, he asked if he could perform with a simple brown bag
over his head.  He was a hit and appeared on over 150 episodes of
the show.

Langston acted in, wrote and produced a bunch of other things and
went through two marriages.  According to Wikipedia, in the 1990s,
he semi-retired to raise his two daughters and, by all accounts, he
did a great job.  He does occasional stand-up in Las Vegas and is
writing his memories.  He also does considerable charity work for
various children’s causes.  Maybe he’s not a super-star, but, in my
book, his is a life well lived.

Maybe DC should have published an Unknown Comic book.  If asked, I
would have been delighted to write it.

One of the good things about owning a comic-book store was getting
to read or, at least, flip through all the new issues every week.
I don’t think I want to do that these days, but I do enjoy sitting
down with a batch of comics.

The Answer #1 [Dark Horse; $3.99] is by Mike Norton (story and art)
and Dennis Hopeless (story and writing).  The first of four issues,
it introduces a masked super-hero with an exclamation point on his
full-face mask.  This first issue was moderately intriguing, enough
to earn it a second chance from me.  Norton’s art was big and bold,
perhaps a touch too much for the material.  The writing was good.
Some online commentator said the Answer is Dark Horse’s version of
The Question - and that the Black Beetle is DH’s take on the Blue
Beetle - but I’m not seeing that.  On the other hand, if Dark Horse
is considering doing their versions of either Gorgo or Konga, they
really need to hire me to write those books.

I also read a trio of recent Marvel Comics issues. Astonishing X-
Men Annual #1 [$4.99} was the best of the bunch, due to Christos
Gage’s “Welcome to the Family.”  Drawn by David Baldeon with inks
Jordi Tarragona, the story is set on the night of Northstar’s and
Kyle Jinadu’s honeymoon.  The festivities are interrupted by Logan
and the gang needing Northstar’s help to foil the assassinations of
mutant family members and loved ones by the Friends of Humanity, a
hate group determined to make a bloody statement.  This is a solid
story with several excellent Kyle scenes.  Gage is far and away my
favorite Marvel writer these days.

Backing up the new story is a reprint of the Alpha Flight story in
which Northstar’s homosexuality was made public.  It’s nonsensical
and unsubtle in its writing and downright ugly in its art.  People
sure bought a lot of crap comics in the 1990s.

Avengers #1 [$3.99] is the premiere issue of the for-no-good-reason
relaunch of the title.  Jonathan Hickman is the writer and, while
the story isn’t entirely without merit, the writing strikes me as
being insufferably pleased with itself which, of course, distracts
from the story.

The Jerome Opena art didn’t do much for me either. It’s too posed.
Even the action scenes lacked any genuine sense of movement.  The
last page of the issue, which could and should have been dramatic,
was undone by its static pin-up quality.  Additionally, though this
might just be me, I didn’t recognized half the heroes shown on the
page.

I liked Avengers Assemble #10 [$3.99] better.  Kelly Sue DeConnick
provided some good moments for Captains America and Marvel in her
script and did well with the Hulk, Iron Man, Thor and Spider-Woman.
That’s a solid roster for the team.  I’m on the fence when it comes
to new villain Yun Guag Han, but he definitely has my interest at
this point.  I also liked Stefano Caselli’s art, which adds up to
a respectable win for this issue.

One of the all-time most popular features in Comics Buyer’s Guide
was its monthly “Top Ten Covers” feature.  Each week’s covers were
chosen by a different CBG writer or guest professional.  I did my
list in 2007.

The Wednesday’s Heroes website has revived the feature on a weekly
schedule with a new list being posted every Friday.  Except that’s
not the case this week.

This week, Wednesday’s Heroes is re-presenting my list from 2007.
There are some unusual choices on that list and I think you’ll get
a kick out of it.  Check it out.