SERGEANT PRESTON OF THE YUKON 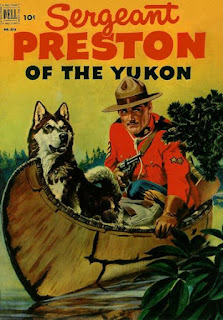 ﻿Sergeant Preston of the Yukon #373 [February 1952] is what it says
in the indicia of this issue, but the Grand Comics Database lists
it more correctly as Dell’s Four Color #373.  Like the radio show
which introduced the character, the comic featured the adventures
of Sergeant William Preston of the North-West Mounted Police and
Yukon King, his sled dog.  The duo fought assorted bad guys in the
Northern wilderness during the Gold Rush of the 1890s.

Sergeant Preston is a classic character who never showed up on my
radar when I was growing up.  I never listened to his radio show
[1938 through June 9, 1955] or watched his TV series [September 29,
1955, to September 25, 1958] and, although Dell published 29 comic
books starring the character and it’s likely I saw them somewhere
or another, I have no memory of ever reading an issue.

The cover painting of this issue was Morris Gollub, who painted all
four Sergeant Preston issues of the Four Color series and most of
them painted covers thereafter.  At some point, the paintings were
replaced by photo covers of Richard Simmons, who played Preston in
the TV series. Actor Simmons should not be confused with fabulous
fitness sprite Richard Simmons.

There are three Sergeant Preston stories in this issue.  They are
written by Gaylord DuBois and drawn by Alberto Giolitti.  This team
did all of the Sergeant Preston comic books.  Here are the titles,
page counts, and GCD synopsis for these stories:

“Undercover” (9 pages). Preston goes undercover in Skagway, Alaska,
to get information on who murdered Roger Morton to get $50,000 in
gold.

“The Wrong Map” (9 pages). After finding a rich gold strike, Bob
Leyden returns to Dawson City to get backing from B. J. Summers,
who has a daughter, Helen, who Leyden would like to marry. However,
Frank Palmer, Summers' supervisor, is a romantic rival for Helen.
Leyden's samples and map of his claim are stolen, but Sgt. Preston
comes up with a plan to trap the thieves.

“Morse Code Mantrap” (16 pages). Old sourdough Si Moore is shot and
his gold stolen from his isolated cabin. Moore makes his way to
town for medical help and Sgt. Preston takes on the case. Preston
is ambushed at a trading post by the robbers but a tribe of Indians
helps him capture the fugitives.  The story continues on the inside
back cover in black and white and concludes on back cover in color.

This issue’s inside front cover has a one-page filler titled “An
Alaskan Cache” by an as-yet-unidentified writer and artist.  This
filler offers "directions for building an elevated food cache for
storing supplies out of the reach of animals."

I don’t say it this often as I should, but the GCD is an incredible
resource for comics fans and historians.  You should visit the site
on a regular basis.

The Overstreet Comic Book Price Guide prices on this issue range
from $8 (good) to $120 (near mint).  Depending on the condition of
the issue, I’d would be happy to trade credit on purchases from my
Vast Accumulation of Stuff or a signed copy of my 1000 Comic Books
You Must Read for a copy of this issue.  That offer holds true for
all comics from my December 1951 birth month.

Courtesy of my local library system, I watched a couple movies over
the weekend.  First up was Ted, Seth MacFarlane’s 2012 comedy about
a teddy bear that comes to life because of a young boy’s wish and
who still lives with his now-adult human BFF.  The bear is “played”
by director and co-writer MacFarlane.  The grown-up boy is played
by Mark Wahlberg.  The grown-up boy’s hot girlfriend is played by
Mila Kunis, one of the top ten hottest women on the planet.  Which
I wish didn’t sound creepy from a 61-year-old man.

I watched the unrated version of the movie and found it incredibly
funny.  Though some friends felt all the funny bits were shown in
the trailer, I must now conclude that they must have been so high
that they watched the movie and thought it was a trailer.  There’s
hilarious moments in this film.  Some of them are gross, but those
didn’t overwhelm the film.  There was good acting and characters.
There was a creepy father-son team that wanted Ted for their own.
There were amusing appearances by celebrities playing themselves.
I laughed a lot and felt happily relaxed at the end of the movie.
I’d rate that a big win for the movie and for me.

My other weekend movie was Men in Black 3 [2012] with Will Smith as
J, Tommy Lee Jones as K and Josh Brolin as the 1969 version of K.
Emma Thompson joins the cast as the new head of the Men in Black.
Good performances all around.

The plot? Boris the Animal, frontrunner of a world-devouring race
was captured by K in 1969 and imprisoned in a facility on the moon.
He escapes and travels back in time to kill K...and succeeds.  In
our world, K’s been dead for over four decades and Earth is about
to become an alien invader buffet.

Because of his bond with K, J is the only person who knows what’s
going on.  However, this being MIB and all, O believes his story.
J time-travels to the day before K was killed to save his partner
and to kill Boris. As a child of the 1960s - more or less - I got
a kick out of the movie replicating that decade.

This is an entertaining movie and much better than the second one.
There’s more emotional weight to it and it does not diminish what
we’ve come to know of these characters.

Two other things about the movie pleased me greatly.

Michael Stuhlbarg is a hoot-and-a-half as an alien who can see all
possible futures.  He was great fun to watch.

Lowell Cunningham’s credit - he’s the creator and writer of the Men
in Black comic books - is as large as any other credit in the film.
If he’s also getting a piece of the action, I am thrilled for him.
Of course, me being me, I have to ask “What has he done for comics
lately?” I mean, considering his concept spawned three successful
movies, I would think some comic-book publisher somewhere would be
eager to work with him.  Just thinking out loud here.

I’ve got a few more movies that I’m hoping to watch this week.  One
was a gift from a reader.  One came from the library.  One ended up
as the result of an Amazon gift card burning a hole in my wallet.
I may get to all of them by this time next week.