RIDE THE PLAINS WITH FIREHAIR 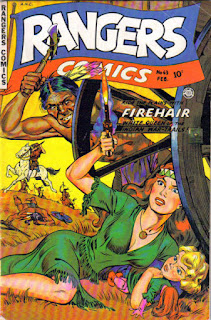 ﻿Rangers Comics ran 58 issues from #8-65 [December 1942-June 1952].
The first seven issues were Rangers of Freedom Comics and the title
continued as Rangers for another four issues from August 1952 to
Winter 1953.

Rangers Comics #63 [February 1952] cover-featured the title’s most
enduring and popular star, Firehair.  She was Lynn Cabot, the mild-
mannered daughter of a Boston businessman.  Traveling with her dad,
their party was attacked by white men disguised as Dakota Indians.
Lynn, the only survivor, was rescued and nursed back to health by
the real Dakota people.  The trauma had erased her memory, though
she would later regain it.  She became the tribe’s finest warrior
and was often treated as their leader.

The Grand Comics Database credits the cover art to the Jerry Iger
studio.  Firehair’s face looks maddeningly familiar to me, but I’m
unable to identify the artist.

The contents of the issue:

Space Rangers in “The Quest for Lost Atlantis” (3 pages), drawn by
Murphy Anderson.

Jan of the Jungle (6 pages), drawn by Enrico Bagnoli.  This would
be the character’s last appearance.

As you can see, Rangers Comics offered some variety with stories of
the western, science fiction and jungle genres.  It seems likely
most of this issue’s material was supplied by the Jerry Iger Shop.
As with all of the Fiction House titles, I think you could compile
a terrific collection of stories from Rangers Comics.

I’m still reading back issues of Batman Confidential and today I’m
recommending issues #36-39 [early January-late February 2010] by
Royal McGraw and artist Marcos Marz.  You may recall I praised the
Commissioner Gordon one-shot by McGraw.  Well, this serial isn’t as
outstanding as that one-shot, but it’s still pretty good.

“Blackhawk Down” has Batman, Blackhawk Express, Lady Blackhawk, a
renegade Blackhawk from World War II and a surprise appearance by
a hero whose identity I won’t reveal on account of it’s a surprise!
I was more than a little dismayed to see Lady Blackhawk brainwashed
by the villain with relative ease, but that plot development is my
only major quibble with the serial.  It’s got cool airplanes, weird
war weapons and lots of action on the ground and in the air.  It’s
what I would want from a story involving Blackhawk and the legacy
of the Blackhawks.  The GCD doesn’t list a trade collection of this
story, but, if there is one, it’s worth reading.

Brian Michael Bendis wrote a whole bunch of issues of the Avengers
in one form or another.  I’m pretty sure he’s written more Avengers
than any other writer.  While I haven’t liked them all - all those
freaking company-wide crossovers made my eyes bleed - I’ve liked a
great many of them.

I recently read New Avengers #31-34, the “End Times” finale of the
title.  The best thing about the story is the Luke Cage sub-plot.
Bendis has done a tremendous job with the character; I don’t think
anyone’s written him better.

The worst thing is this final arc is yet another case of the heroes
battling someone from their past and only incidentally helping the
people.  This has become so common in the DC and Marvel super-hero
comics that it’s now noteworthy when super-hero self-preservation
isn’t the driving force of a storyline.  Sigh.

The second-worst thing was the multiple artists of the final issue,
which include artists wholly unsuited for the pages that they drew.
It was a conceit that diminished the story.

That said, the story was a decent send-off for Bendis and the book
itself. I’m good with that.

Howard and Thomas brought their own distinctive voices to Howard’s
legendary creations.  Even when Thomas was adapting Howard stories,
it was Roy’s voice that spoke loudest.  By adding his distinctive
voice to those of so many other Conan writers, Wood won me over in
a matter of issues.  His is a somewhat different Conan in thought
and visual appearance, but it’s still Conan and it’s a great take
on the barbarian hero.

Artist Becky Cloonan, who drew issues #1-3 and #7, was not someone
I would have thought of as a Conan artist.  To my delight, Cloonan
established a look for Conan that, while in keeping with Howard’s
creation, was different from what has come before.  The succeeding
artists on this series have kept that look.

I’m digging this new series of Conan comics because they’re filled
with surprises without losing sight of the “real” Conan.  I never
pictured the pirate queen Belit as she appears in these thrilling
stories, but her passion for Conan and life is a force of nature.

I’m not much of a fan of sword-and-sorcery in comics or prose, but
Conan has always been the exception. Kudos to Dark Horse and some
of the best writers and artists in comics for keeping me intrigued
and entertained by the character.