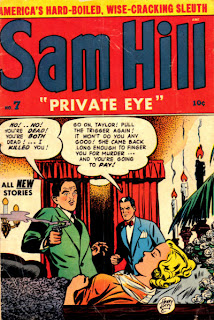 ﻿From 1950 to 1952, Archie Comics published seven issues of Sam Hill
Private Eye under its Close-Up imprint.  Hill was a typical tough-
guy detective.  In his debut issue, the character offered readers
this self-introduction:

“Yeah! I’m SAM HILL, ex-Ivy League halfback. What’s a college Joe
doing as a private dick? Well, I’ll tell you about that sometime...
and that white streak running through my hair – well, I’ll tell you
about that sometime too. Anyway, the gals love it – say it makes me
look distinguished – HA! It’s better than a yellow streak down a
guy’s back I’ve bumped into that kind, too – with my fists! The
boxing I did in college taught me to be handy with my dukes – and
I don’t mean royalty! All this with a 6’-1” 195 lbs.!"

Sam Hill Private Eye #7 [1952] was the final issue of the series.
Harry Lucey drew the cover and interior stories:

The Grand Comics Database doesn’t identify the writer of these four
tales, but it’s possible, maybe even likely, that Lucey wrote them
himself. Though best known as the primary Archie artist from the
late 1950s into the 1970s, Lucey also drew crime and romance comics
and characters like the Hangman, Madame Satan, Flash Lightning and
Magno the Magnetic Man.

After this issue, Sam Hill didn’t appear in comic books again until
Archie & Friends #150 [February 2011], the first of two issues in
which a strange meteor shower brought comic-book characters to life
for a team-up with Archie, Jughead, Betty, Veronica and the rest of
the Riverdale teens.  That adventure was written by Fernando Ruiz,
penciled by Bill Galvin and inked by Jim Amash.

I’d love to see Sam Hill Private Eye reprinted in a nice hardcover
or trade paperback collection.  In the meantime, you can learn more
about the character at the Thrilling Detective website.

Keep watching this bloggy thing for more vintage comic-book covers
from my birth month of December 1951.  There are over three dozen
to go before I move on to covers from another key month in my life
and career. Needless to say, I get a kick out of these blasts from
the past and I hope you do, too.

Much to my surprise and dismay, several movies I had requested from
my local library showed up at the same time.  I only managed five
minutes each of Elf-Man and Demoted and my response to those five
minutes was the same in each case:

What was I thinking?

I did watch all of The Bourne Legacy (2012), which apparently takes
place at around the same time as The Bourne Ultimatum (2007) with
photos of Matt Damon as Jason Bourne showing up from time to time
to remind viewers that Damon isn’t in this movie.  However, we do
get a full compliment of ruthless government operatives willing to
kill anyone and everyone who knows anything of their dark secrets.
Like when they try to kill every Bourne-like enhanced operative so
they don’t have to confess their sins to Oprah.  Yes, I am mocking
this picture. Please don’t kill me.

The action stuff is kind of fun, the acting less so.  I did enjoy
seeing Jeremy “Hawkeye” Renner as a super-soldier and Rachel Weisz
as the pretty scientist who tries to help him and Edward Norton as
a government douche bag.  I also very much enjoyed the pizza (Pizza
Hut stuffed crust with beef and black olives) I ate while watching
this movie, so I can’t be too critical of the film.

I also liked the brief “team-up” of Renner’s character and another
enhanced operative and wish the movie hadn’t been so quick to kill
off the others.  An entire squad of these super-soldiers would’ve
been cool.  If they make that movie, I’ll watch it.  It’ll give me
an excuse to order another pizza.

The only recommendation I can give this movie is that action fans
will enjoy the action parts.  There’s a chase scene in the crowded
streets of Manila that was amazing.  The setting almost made up for
the emotionless super-super-soldier Norton sends after Hawkeye and
the pretty scientist.  I wonder if they always planned for the new
guy to be emotionless or if that was decided after they figured out
he couldn’t act.  Ah, well.

I didn’t order another pizza, but I did watch Expendables 2 (2012)
and, against all critical logic, found it entertaining.  It’s more
of the over-the-top mercenary madness that we saw in the original
with more Bruce Willis, more Arnold Schwarzenegger, not enough of
Jason Statham and too many nods to previous movies starring Bruce
and Arnold and Sylvester Stallone.

Stallone and his crew are hired to retrieve a mysterious item from
a downed plane is Albania.  They’re accompanied by CIA agent Maggie
Chan [Yu Nan]. They get ambushed by mercenaries and their youngest
team member is murdered by a gang of mercenaries led by arms dealer
Jean Vilain [Jean-Claude Van Damme].  If this had been a Star Trek
episode, the slain young man would have worn a red shirt.  That’s
how utterly predicable his death was.  I won’t even comment on the
notion of naming the villain “Vilain.”

The mysterious item is a computerized map to five tons of refined
plutonium left over from the Cold War.  To dig it out, Vilian has
enslaved every man in every nearby village.  He really want to live
up to that name.

Stallone looks his age and about a decade beyond that, but I remain
a fan of old guys kicking ass.  Dolph Lundgren’s character is now
revealed as a former professor.  In other words, he’s a maniac with
brains and that’s fun.

Chuck Norris joins the cast as a lone wolf mercenary and, when he’s
not playing the right-wing asshat that he has become in real life,
he’s a hoot and a half.  Norris should stop appearing in real life
and only appear in movies.

Van Damme is an excruciatingly bad actor.  But he does shine in his
climatic man-to-man fight with Stallone.  It’s been reported Van
Damme restaged the fight because he felt viewers would want to see
a longer final encounter between his character and Stallone’s. That
was a very good call.

Yu Nan is a very good actor, so watching her was a pleasure.  I’ll
have to look for her other movies.

Remaining team members Terry Crews and Randy Couture don’t get much
screen time in the movie.  I liked Crews a lot, but never warmed to
Couture.  With Stallone looking to sign more familiar names for the
third movie - yes, there will be a third movie - I don’t see their
situations changing for the better.

I enjoyed Expendables 2 more than The Bourne Legacy.  Though it’s
surely not great art, sometimes I just want to watch a big stupid
movie with big stupid explosions and firepower.  Now if only they
could add a giant monster to the next one.