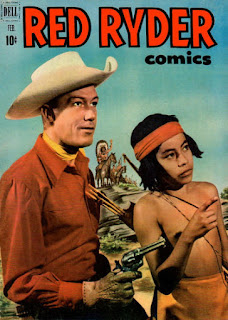 ﻿Red Ryder Comics #103 [February 1952] hit the stands in the month
of my birthday, December 1951.  The Grand Comics Database doesn’t
have any information on the issue, but here’s a couple paragraphs
lifted from Wikipedia:

Red Ryder was a popular long-running Western comic strip created by
Stephen Slesinger and artist Fred Harman. Beginning Sunday,
November 6, 1938, Red Ryder was syndicated by Newspaper Enterprise
Association, expanding over the following decade to 750 newspapers,
translations into ten languages and a readership in the United
States of 14 million. The 26-year run of the strip came to an end
in 1964.

The first Red Ryder comic book was published by Slesinger's Hawley
Publications, Inc. in September 1940, followed by Hi-Spot Comics
for one issue. Dell Comics launched its Red Ryder in August 1941,
changing its title to Red Ryder Ranch Magazine with #145, and then
to Red Ryder Ranch Comics with #149. Red Ryder Comics consisted of
reprints of the newspaper strip until issue #47 (June 1947), when
it began producing original material. Altogether, the title ran for
a total of 151 issues, ending in 1957, one of the longest
continuous newsstand runs of any Western comic.

Red Ryder had his own radio show and also starred in 35 movies and
serials. Though two pilots were shot for a TV series, the cowboy
hero never got his own show.  However, he did inspire a buttload of
toys and other merchandise including the “Red Ryder Carbine-Action
Two-Hundred-Shot Range Model Air Rifle BB gun” that figured so
famously in the 1983 film A Christmas Story.

One of the most popular features in Comics Buyer’s Guide was “Top
10 Favorite Comic-Book Covers,” written by a different contributor
or professional every month.  As one of their final F&W projects,
editors Maggie Thompson and Brent Frankenhoff put together a book
that tops that feature by a couple hundred covers.

The Greatest Comic Book Covers of All Time [F&W Media; $8.99] gives
readers some 60 full-color shiny pages of covers that “stopped you
in your tracks when you saw [them] in the store” and, for each of
the selections, a line or two of description.  The book is divided
into two-page chapters like “80's Excitement,” “Let’s You and Him
Fight” and “Got Innuendo?”  Each chapter also has a clever quote by
a comics commentator or professional.  Yours truly is quoted a few
times with said quotes coming from 1000 Comic Books You Must Read.
But I’d recommend the book even without those quotes.

On a related note, the Wednesday’s Heroes website is also trying to
keep the “top ten covers” fun going.  Every Friday, the site offers
a new list of ten covers selected by a different contributor to the
website.  I’m enjoying the feature and recommend it to you.

In other online stuff...

Over at the Comics Related website, David Brashear writes about my
1980s run on Hawkman.  There’s also a brief interview with me.  You
can read about the column and interview here.

At Comics Attack, Ken Meyer Jr. writes about great fanzines of the
past.  In his latest column, he wrote about Gary Groth’s Fantastic
Fanzine Special #2.  Back in the day, the day between 1972 or so,
I used to be a regular contributor to Groth’s zine.  By the time of
this special issue, due to a falling out between Groth and myself,
I had stopped writing for the zine.  This special makes a cryptic
reference to that.

Much to my surprise, Meyer asked Groth about that reference and got
an answer and an apology for Gary’s actions at the time.  I don’t
know if I’ve written about that situation before, but I think it’d
be good for one of those “lessons from Tony’s life” pieces that my
bloggy readers love.  I’ll try to get to it later this month after
I search my memory and records for more details.

Groth’s Fantastic Fanzine was one of the best zines of its times,
very different from the also excellent Comics Journal.  You should
check out Meyer’s column here.

In the meantime, though this is the first time Gary apologizes for
his actions, he and I got past that a long time ago.  I even took
my Everett True cartoons to Amazing Heroes and Comics Journal
when I felt restricted by Comics Buyer’s Guide.

Two other comics people are mentioned in Groth’s comments as well.
As far as I know, we’re all okay as well.  In fact, when I lived in
New York in the 1970s, one of them offered me a job. I’ll tell you
all about it in the near future.

Want to see a photo of me from back in those days?  Check out Sean
Howe’s Marvel Comics The Untold Story blog here.

With the help of Sainted Wife Barb and son Eddie, my ancient file
cabinet has been moved up two flights of stairs and now stands in
my office.  It’s five feet tall and constructed of adamantium.  Or
something very close to that metal.  In case of nuclear attack, I
plan to pull out the drawers and live inside it.

Now begins what will probably be the slow task of going through a
dozen or so boxes of new and old files.  Any files that could be of
near future value will go into the file cabinet.  Some files will
be returned to the boxes until I buy a second file cabinet of equal
size and endurance.  Some files - and I’m kind of hoping this will
be a lot of files - will go into the recycle bin or shredder. Note
to self: buy a shredder.

What this means for the bloggy thing is that I will eventually have
quick access to all sorts of amazing stuff from my past.  You can
expect more trips down memory lane in the future...and maybe even
some choice stuff showing up in my online sales.

Speaking of those online sales, in a few hours from now, I will be
post this week’s Vast Accumulation of Stuff Sale.  As always, your
orders are appreciated.

Finally, I’m working on this year’s Tony Isabella convention list.
The biggie will be Comic-Con International in San Diego, but there
will be at least three other appearances this year.

If you’re a convention promoter and would like me as a guest at an
event, e-mail me.  You should expect to cover my hotel and travel
expenses...and provide me with a table for signing and selling my
work and other items.  Naturally, I will promote these convention
appearances in this bloggy thing and in the other venues available
to me.

That’s it for today.  I’ll be back tomorrow with more stuff.