A DOG FROM BEYOND 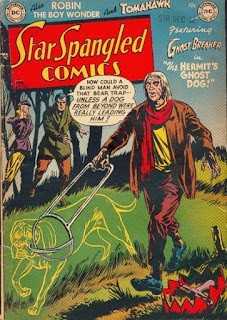 ﻿How could a blind man avoid that bear trap –- unless a dog from
beyond were really leading him?
That’s the question asked by a disbelieving Doctor Terry Thirteen,
AKA the Ghost-Breaker, on the cover of Star Spangled Comics #125
[February 1952]. The cover was penciled by Leonard Starr and this
long-running DC Comics title was just a few issues away from being
turned into Star Spangled War Stories.

Thirteen was a parapsychologist who would investigate and disprove
supernatural happenings.  That worked okay for him in these tales,
but reduced him to a clown in the later comics of a DC Universe in
which the supernatural was unquestionably real and, indeed, common
in the lives of the DCU super-heroes.

Buzzy in “Be Yourself -- Your Best Self!” (1 page).  This was one
of the ever-present public service advertisements that ran in DC’s
comics.  It was written by Jack Schiff, drawn by Winslow Mortimer
and featured teen Buzzy teaching a classmate about self-confidence
and good manners.

Captain Compass in “The Four Lives of the "Edith B.!" (5.67 pages).
This story is drawn by Paul Norris, but its writer hasn’t yet been
identified.

“Metal That Changed Our Lives” (2 pages). This is a text article on
the history of copper.

Tomahawk in “The Pirates of the 1,000 Islands!” (5.67 pages).  The
story is drawn by Bob Brown, but its writer remains unidentified at
this time.

The issue also has a full-page advertisement for House of Mystery
#2 [February-March 1952]. The cover to that issue was penciled by
Curt Swan.

I like the notion of an adventure anthology book with such varied
features.  Probably the closest thing we have to such a title today
is Dark Horse Presents.

Stating the obvious, I have financial and professional issues with
DC Comics and - believe it or don’t - they have nothing to do with
why I dislike their current super-hero products.  Why I don’t like
their current super-hero products has everything to do with their
comic books not being very good and, in many cases, being downright
awful.  I would tell you I’m currently struggling to get current on
The Fury of Firestorm: The Nuclear Men, but that’s not accurate.
After reading uninteresting issue after issue, I’m just flipping
through them now.  Nothing to see there.

On the other hand, I’m really enjoying Ed Brubaker’s Batman stories
from about ten years ago.  A bunch of these were reprinted in the
100-page DC Comics Presents Batman #1-3 [2010; $7.99 each].  They
feature a Batman who works for me.  He’s amazing at what he does,
but he’s a human being as well.  The supporting players, especially
bodyguard Sasha Bordeaux, are essential parts of the continuities.
The villains are deadly and scary, but have greater depth than the
usual insane mass-murderers.  The writing goes down as smooth as a
fine ale and, though I haven’t been a huge fan of his work in the
past, artist Scott McDaniel’s contributions to these stories also
pleases me.  I’m delighted with these comics and not the least bit
surprised that DC has no clue how good they were or how terrific a
character Sasha was.  It’s just how DC is.

Ten minutes after writing the above, I took a short break to have
a slice of pizza and read the last issue of Firestorm that I had on
hand.  It was Firestorm #13 and the first issue of what I assume is
the new creative team.  It was written and penciled by Dan Jurgens
with finished ink art by Ray McCarthy.

My first impression was visual.  The comic looked much better than
the previous issues.  People looked like people, Firestorm looked
like Firestorm, the backgrounds placed the story firmly into a real
world.  I have a wide range of what I like in comic-book art and,
though this art might not be innovative, it represents good solid
drawing and storytelling.

Mystery villain attacks a government base to “test” the abilities
of Firestorm.  Three (I presume) new villains working for whoever
is running this business are introduced.  The issue concludes with
no satisfying ending, which, I believe, even a continued story must
have.  Someone paid three bucks for this comic books.  They should
finish feeling that they got their money’s worth.

Every issue of every comic book is somebody’s first issue of that
comic book.  The job is too entertain them so well that they come
back for the next issue.  Thus endeth the sermon.

I’ll be back tomorrow with - shudder - an original and unpublished
script I wrote before I was a comics industry professional.  I was
a teenager when I wrote this script, which is a whole lot of years
ago.  Lord have mercy on my soul.