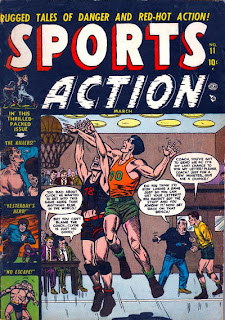 ﻿Sports Action #11 [March 1952] hit the newsstands in my birth month
of December 1951...and we all know how fascinated I am by any comic
book that came out that month.  The cover artist of this issue has
yet to be identified.

Sports Action ran 13 issues from February 1950 to September 1952.
Its first issue was #2 as the title took over the numbering of the
one-shot Sports Stars. I don’t have any information on the plots of
the stories, but we know who drew most of them and who wrote one of
them.  Here are the contents...

“The Man Who Failed!” (6 pages), written by Ernie Hart and drawn by
Jay Scott Pike, both of whom signed the story;

“The Killer!” (6 pages), drawn and signed by Morris Weiss; and

How long has it been since an American comics publisher has tried
a sports comic?  Such comics were never a large part of the comics
market, but I wonder how they would fare today given the enormous
profits being made from sports memorabilia.

Keep watching the bloggy thing for more vintage comic-book covers
from my birth month.  If you have comics I’ve written about and are
willing to trade them for copies of 1000 Comic Books You Must Read
or items from my Vast Accumulation of Stuff sales, I’d definitely
be interested in discussing trades with you.

I’m not in the mood for reviewing anything today, so I figure I’ll
go all “me, me, me” on you and share some random stuff.  Feel free
to just pretend to listen.  Godzilla knows, I impose you too much
as it is.

Just as I have more comic books and books to read than I’m likely
to get to in my lifetime - though I plan to both live a very long
life and get to them all - I have a lot of DVDs to watch.  To name
just the most recent arrivals: Croczilla, Dredd, House, Snow Shark
and a DVD sent to me by original Buyer’s Guide publisher Alan Light
that contains “rare vintage video of comics fandom.”  I am praying
to the Great Scaly One that I do not appear on any of that vintage
video.  By the way, House is not the TV show about the odd doctor
that I never watched.  It’s a Japanese ghost story.  Also sitting
nearby is the complete Ranma 1/2 animated series on DVD.  Someone
needs to invent the 48-hour day for me.

I’m always pleased and somewhat surprised when readers compliment
me on my 1970s and 1980s work.  Especially when those readers were
not born when that work was originally published.  I have somewhat
mixed feelings about some of the work, but satisfied that I always
gave every assignment the best I had in me within the circumstances
of my writing it.

As I get older, I find I have less patience with certain kinds of
people.  I’m sure academicians are very dedicated and nice folks,
but they give me a pain in my brain when they start over-thinking
the comics writing I did.

Recently, and I apologize for being somewhat grumpy when answering
this gentleman’s questions, I was grilled about one of those quick
filler pages I wrote for Marvel’s black-and-white horror magazines.
The scholar claimed I was one of the first to write about Lilith in
comics and wanted to know my inspiration for doing so.

The extent of my inspiration was that, from time to time, my friend
and editor Marv Wolfman would ask me to write a bunch of one-page
fillers for the monster magazines.  I would flip through the dozen
or so books of mythology and monster folklore I owned, retrieving
information from several different sources and boil it down to 5-7
panels.  I would write several of these in an evening.

I always tried to bring my “A” game to these fillers, writing them
in what I hoped was an entertaining and informative way.  Some of
my chosen subjects were great fun for me.  Some of them were just
a way to exercise and improve my craft.  But I never thought they
were terribly important in either comics history or monsterology.

Ask me about them four decades later, as this scholarly fellow did,
and I’m not going to be able to tell you more than the above.  It
cost me valuable brain cells to remember what I’ve just repeated to
you. I was just a honest writer doing my work with clean hands and
the dual desire of entertaining readers and making Marv’s editorial
load just a little lighter.  That’s the whole of it.

I don’t have much patience with dishonest people, which could be a
subject for an entire week of bloggy things.  So I’ll just mention
my most recent encounter of this nature.

A guy has a Jack Kirby cover from the 1970s.  It’s not prime Kirby,
but it’s a spiffy piece.  The Grand Comics Database credits Marie
Severin with the layout and Frank Giacoia as the inker.  However,
when I saw the original art for this cover, it was clear to me and
at least one other person that John Romita Senior had redrawn the
face of the title hero.  I’d seen Romita heads on enough covers to
be fairly certain of the identification.

When the owner was informed of this by the “one other person,” he
removed the person’s comment from his gallery.  He claimed that he
did this because, while we might be right, he hadn’t seen anything
in the way of documentation of this and didn’t want to mislead any
future potential buyers.  So I guess if someone goes to the Grand
Comics Database and adds this information, the owner will quickly
include it in his description of the cover.

Or not. I hope I’m wrong about this, but I don’t think he’s as much
concerned about misleading potential buyers as diminishing how much
money he might get when he sells the cover.

I sent him a private and only mildly snarky e-mail questioning his
spin on the matter.  I figured, hey, give the guy the chance to do
the right thing.  His response made it pretty clear that he wasn’t
likely to do that.  To me, failing to include that information is
less than honest.  Your mileage may vary.

The “one other person” has come around to the owner’s position and
posted this to the bloggy thing:

I'm the "one other person" and as you know, I've changed my mind
based on the copy of Kirby's pencils that I discovered in a
Heritage listing for the Severin prelim. The face is utterly
Romita-esque, but I can only now attribute that to Giacoia's
mastery of the house style. His inking is very close to Kirby's
original, and yet the original doesn't look like Romita. I agree
that the (potential) seller's argument for deleting my comment was
fairly spurious-- it was fair and reasonable discussion --but as it
turned out, we were wrong. Goes to show.

I still think the head in question looks like Romita fixed it up a
bit in inking it.  But Aaron posits a plausible scenario for what
I’m seeing, so, in the interest of plain fairness, I’m withdrawing
and hereby apologizing for any insinuation of dishonesty on the
part of the owner.