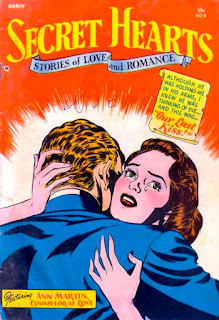 ﻿Secret Hearts #8 [February-March 1952] is one of those comic books
that, when I read about it, I want to read it.  In this case, it’s
because the artists are all artists I associated more with genres
other than romance comics.

The cover artists are Carmine Infantino (pencils) and Frank Giacoia
(inks).  Here’s the info on the issue’s four stories:

“Condemned Love” (7 pages).  Drawn by Infantino and Giacoia, this
is a “Romance, Inc.” story starring Ann Martin, Counselor-at-Love.
According to the Grand Comics Database, the feature last appeared
in Wonder Woman #50 [November-December 1951].

“Our Last Kiss” (8 pages) with pencil art by Irwin Hasen and an as-
yet-unidentified inker.

I’ve been reading comic books somewhat new and somewhat old these
days.  Here’s what I thought of some of them:

A+X #2 [Marvel; $3.99] featured two stories, each of which teamed
a member of the Avengers with a member of the X-Men.  Apparently,
the two teams are going to try to play nice with each other in the
hopes of avoiding future crossover events.  Okay, maybe that’s just
wishful thinking on my part.

Black Widow and Rogue star in a 10-page story written and drawn by
Chris Bachalo with inks by Tim Townsend.  This one doesn’t have it
all, but does have out-of-control Sentinels, stereotypical science
geeks, action-packed art that looks a bit like fashion art, and a
one-panel bit of fan service.  I liked it.

Iron Man and Kitty Pryde star in the second 10-page story, which is
written by Peter David and drawn by Mike Del Mundo.  Tony Stark is
looking to hire Kitty, something is controlling old suits of Iron
Man armor, and it’s even more fun than the first story, which was,
as you can tell from the previous paragraph, also fun.

Two complete stories for four bucks.  Three bucks would have been
far more reasonable, but this is still the kind of comic book I’d
happily buy if I were buying comic books the way I used to buy them
in my carefree youth.

I’m intrigued by the premise of Brian Michael Bendis’ All-New X-Men
[Marvel; $3.99], of which I’ve read the first three issues.  Hank
McCoy is dying and, besides being depressed about that, is really
depressed that his pal Cyclops really screwed the pooch in Marvel’s
last seemingly endless crossover event.  So...and I’m assuming his
illness has impaired Hank’s judgment...he travels back in time to
bring his younger self and the fledgling X-Men of that past back to
the present time.  He hopes their presence in our time will somehow
fix the broken Cyclops and the broken world Cyclops created in the
afore-mentioned crossover event.

What could possibly go wrong?

Actually, while I can think of lots of things that can wrong since
young Cyclops now knows that old Cyclops murdered Charles Xavier,
young Jean Grey knows old Jean Grey died and young Hank McCoy has
to be wondering why old Hank is blue and furry, I’m hoping Bendis
surprises me.  That it took three entire issues to get the mutants
from the past in the same shot with Cyclops and his Brotherhood of
Evil Enough Mutants isn’t a surprise.  That’s sort of standard for
Bendis and other Marvel writers.  However, while I’m waiting to be
either surprised or disappointed, the consolation prize is Bendis’
dialogue and spiffy art by Stuart Immonen and Wade von Grawbadger.

I’ll revisit this title in a few more issues.

I’m reading Batman comics from years past, looking for a glimpse of
the character who was once my favorite.  Back in 2008, DC published
Batman: Death Mask, a four-issue Batman manga by Yoshinori Natsume.

In the series, Bruce Wayne is involved in a business venture with
a large Japanese company while a new serial killer is committing
gruesome murders in Gotham City...and this killer is connected to
the time in Wayne’s life when he was living and training in Japan.

Death Mask offers a different emotional and visual take on Batman.
Wayne questions things he experienced in Japan and struggles as he
tries to puzzle out the killer’s identity.  Natsume’s art is moody
and the series is presented in the typical right-to-left style of
Japanese comics.

This isn’t a great Batman story, but it’s interesting enough for me
to recommend you check it out.  The story was collected in a manga-
size paperback which seems to be available through Amazon and on
the secondary market.  Checking the Clevenet library organization
of which my Medina library is a part, I see that there are a dozen
copies of the book available through that system.

DC Comics Presents: Batman #1 [$7.99] was one of a few dozen “100-
page spectacular” issues that hit the comics shops in 2010.  This
one has Ed Brubaker and Scott McDaniel stories from Batman #582-585
and 600.  Even though DC was still sending me a huge box of comics
every month back then, I wasn’t reading many of them.  As a result,
I missed some - and just some - decent comics.

Brubaker’s Batman isn’t bat-shit insane like most of the versions
of the character in recent years.  He does not lack emotion and he
does make some mistakes.  Sometimes those mistakes are because he
hopes some criminals are redeemable.  The four stories reprinted in
this issue were all good to excellent.  If you spot this comic in
the back issue bins, go for it.

When I was going through the boxes of comics for my garage sales,
I put aside most of these 100-page special for later reading.  Even
at eight bucks a pop, I love the concept of big thick comic books.
I don’t know if an original material anthology would be viable at
that price point, but I’d love to see that.