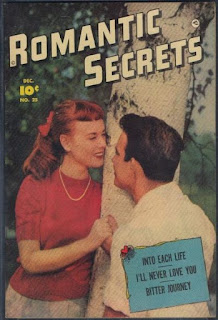 ﻿Fawcett published 39 issues of Romantic Secrets from September 1949
to April 1953.  The title was then picked up by Charlton, which did
48 issues from October 1955 to November 1964.  Charlton started its
run of the book with issue #5, continuing that numbering from Negro
Romances.  Charlton replaced Romantic Secrets with Time For Love,
continuing the numbering.  However, after publishing Time For Love
#53 [October 1966], Charlton relaunched Time For Love a year later
with an actual issue #1 [October 1967]. Whew!

The Grand Comics Database offers the cover of Romantic Secrets #25
[December 1951], but no other information.  Which means I’m going
to make up stuff about the issue.

Take the photo cover, for example.  Such covers were common on the
romance comics of the era, often featuring publicity shots of movie
stars or images purchased from photo studios.  However, this photo
did double duty for Fawcett.  It was also the cover of the slick,
short-lived Forest Romances and shows two young lovers who forgot
to check for sap before they pressed their faces against the tree.
At least they hoped it was sap.

“Into Each Life” is the story of a sanctimonious young couple who
believe themselves God’s favorite worshipers.  They go through life
finding constant and loudly expressed fault with all other people.
They piss God off so much He creates rain clouds that follow them
everywhere they go, even when they enter buildings.  When the two
realize God is trying to teach them a lesson, they realize not even
He is all He’s cracked up to me.  So He smites them.

“I’ll Never Love You” is the story of a beautiful woman who plays
hard-to-get.  Many terrific guys try to win her over.  However, as
she never figured out the next step in her little game of romance,
she ends up alone, ages horribly and is eventually eaten by her cats.

“Bitter Journey” is the amusing story of a man’s search for a woman
who can make the perfect cup of coffee.  He travels the world, but
never finds her. He ends up marrying a stunningly beautiful doctor
and scientist.  She runs tests on him and discovers his taste buds
are the problem.  She performs an experimental surgery on him and,
though it doesn’t cure his problem, it does improve his love-making
skills.  He switches to tea and they live happily ever after.

This issue so offended Dr. Fredric Wertham, author of Seduction of
the Innocent, that, after his fifteen minutes of fame were over, he
devoted years of his life to tracking down the writers and artists
of these stories and kicking them in the nuts.  To further show his
contempt for comics, he refused to reveal the identities of these
writers and artists.  This is why the Grand Comics Database has no
information on this issue.