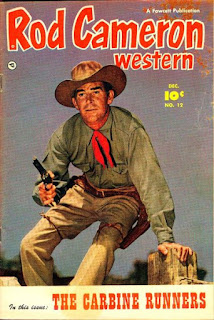 ﻿Rod Cameron Western #12 [December 1951] was one of many comics that
headlined real-life actors who starred in the many western films of
the era.  Fawcett published 20 issues of this title [February 1950
to April 1953], but the Grand Comics Database has no information on
this issue beyond the cover.  Normally, such a lack of information
on an issue would have me making up outrageous stuff about what was
in the issue.  Not this time.

You see, besides appearing in a great many westerns and other films
and TV programs, Cameron was the star of G-men vs. the Black Dragon
[1943], one of the best movie serials of all time.  He played Rex
Bennett, the tough-as-nails federal agent who teamed with British
and Chinese agents to smash a Japanese spy ring that smuggled its
agents into the US by disguising them as mummies.

Cameron would also play Bennett in Secret Service in Darkest Africa
(also 1943).  In that second serial, which I have not seen, Bennett
traveled to Africa to infiltrate a Nazi spy ring.  There’s no way
I’m going to mock the hero who took on the Axis powers in not one,
but two serials.

My ongoing war with my Vast Accumulation of Stuff continues.  This
would be a much easier conflict if, as an anonymous troll suggested
in an insulting message, I was simply selling off my possessions to
make ends.  Such is not the case.

Regardless of whatever revenue streams are coming into the Isabella
household, my aim has always been to reduce my VAOS by 50-70% and
thus spare my family at least part of the problem of dealing with
all my stuff when my lord Godzilla welcomes me into Kaiju Heaven.

Since I don’t plan to ascend for many years to come, and since I do
like having stuff, I’m trying to organize the stuff I want to keep
- and there is a lot of it - so that I can access it easily and so
it looks nice in whatever room(s) it occupies.  Though I live in a
Tardis-like house, that takes considerable planning.

The hallway outside my future reading room has two bookcases that
are quickly being filled with my DC Showcase and Marvel Essential
volumes.  They look really cool, but it’s becoming clear that I’ll
need more than two bookcases to keep all of these volumes together.
There’s room for one more bookcase in the hallway.

When I measured the available width for the third bookcase, it came
to approximately 20 inches. So I need a bookcase six feet tall and
20 inches wide.  That’s not a commonly available size, which means
I’ll need to have a bookcase made for the space.  This is something
I’ve never had done before.  New territory.

How does one go about this? I don’t know. I could search the Yellow
Pages for carpenters.  I could ask friends if they know carpenters
who will do good work at reasonable rates.  I could ask my legion
of bloggy thing readers for their advice.  I’ll probably do all of
the above.

Is this an unnecessary expense? Maybe, but even in its incomplete
formation, the hallway looks so freaking cool my son Eddie takes a
picture of it whenever he comes home for a weekend.  If he sends me
those photos, I’ll run them here.

As it stands, if they stop publishing comic books tomorrow, all of
those Essential and Showcase represent tens of thousands of pages
for me to read.  If I were energetic to go downstairs and do some
math, the page count might top one hundred thousand pages.  That’s
a comforting thought.

The biggest obstacle to success in my VAOS war is enough space to
sort through all that stuff.  In order to organize one room, be it
my office or my future reading room, I have to remove a great many
boxes and random piles of stuff.  Which clutters up another room.
I’ve tried several strategies for dealing with this obstacle, but
none has worked as well as I would have liked.  This predicament is
further complicated by my darling daughter Kelly threatening to
kill me if I put boxes in her bedroom.  Of course, since she’s at
The Ohio State University in Columbus...

In addition to fighting the VAOS on the home front, I also have to
start getting ready for this year’s garage sales.  I can keep that
on the back burner for now - the garage won’t be available for any
setting up until the spring - but being able to put VAOS sale items
directly into boxes on tables in the garage will ease other aspects
of the ongoing war.

Sorting decades of stuff is.

Starting in April, I hope to attend one convention every month for
the rest of the year.  I’m already booked for April through July,
but, under the right circumstances I might be talked into doing an
extra convention in one of those months.

Tricon, the Tri-State Comic Convention, takes place on Saturday,
April 6, at the Big Sandy Superstore Arena, One Civic Center Plaza
in Huntington, WV. The event runs from 10 am to 6 pm, though there
are VIP and Early Bird packages that will allow fans to enter the
convention at 9 am and 9:30 am, respectively. Check out the show’s
website for guest and other information.

The East Coast Black Age of Comics Convention happens on Saturday,
May 18 at the Enterprise Center, 4548 Market Street, Philadelphia,
PA. Show hours are 11 am to 7 pm.  On Friday night, there will be
a reception and the presentation of this year’s Glyph Awards, which
honor comics created by, for and featuring people of color.  There
are more details at ECBACC’s website.

The Derby City Comic Con is scheduled for Saturday, June 29, at the
Kentucky International Convention Center in Louisville, KY.  Show
hours at 10 am to 5 pm.  The con website has more info.

Comic-Con International 2013 takes over comicdom from Wednesday’s
Preview Night on July 17 through Sunday, July 21.  It takes place
at the San Diego Convention Center in San Diego, CA.  To my nearly
overwhelming delight, I’ll be a special guest at this year’s sure-
to-be-spectacular event.

As we get closer to these events, I’ll let you know if I’m bringing
Isabella and VAOS stuff to sell, appearing on panels or looking for
artists for my future projects.  I’m always open to speaking with
publishers and editors about working with them.

If you’re a convention promoter and would like to have me at your
event, email me.  You’ll need to cover my hotel and travel expenses
and provide me with a table for the selling of stuff.  I prefer to
drive to shows, but, if your event is too distant for that, you’re
looking at airfare.

I’m looking forward to seeing old friends, making new friends and
talking with readers and comics industry folk.  I won’t be needing
a concealed carry permit as my weapons of choice are my devastating
charm, good looks and wit...and you just can’t conceal that kind of
firepower.  Here’s hoping to see you on the trail!