THE PORT OF MISSING BADMEN 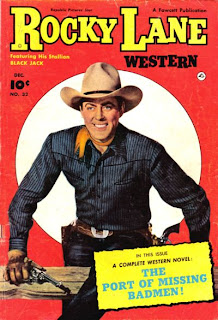 It’s likely I saw some of Lane’s movies when they aired on TV, but
I couldn’t tell you which ones if my life depended on it.  I think
it’s more likely I saw his appearances on the Warner TV westerns of
the 1960s: Cheyenne, Bronco and Lawman.  I loved Warner’s westerns
and detective shows.  I definitely heard him as the voice of “the
famous Mister Ed,” but I remember tiring of that show within a few
episodes.  If anyone in my family was watching it, I found a quiet
room somewhere to read my comics or the science fiction books I’d
borrow from the local library.

Published by Fawcett, Rocky Lane Western #32 is dated and hit the
newsstands in my birth month of December 1951.  Fawcett published
55 issues of the title from May 1949 to January 1954.  When Fawcett
closed its comics division, Charlton picked up the title and did 32
more issues from February 1954 to November 1959.

“The Port of Missing Badman” was a three-chapter adventure of 17.66
pages.  The Grand Comics Database credits the art to Ralph Carlson,
but gives no writer credit.  Here are the GCD synopsis for each of
the story’s three chapters...

1: A former jail bird and killer has set up a new business, making
up a new disguise for badmen after every job they pull, for a
price. Rocky finds the badman's "beauty" parlor.

2: Rocky has been disguised as a notorious outlaw when unconscious,
and is stopped by the Sheriff and his posse.

3: Rocky finds the hide-out of the disguised outlaws.

If you’re expecting great art, craft and writing from Silver Streak
Archives Volume Two [Dark Horse; $59.99], you will be disappointed.
The handsome hardcover volume reprints issues #10-13 of the title
from 1941.  That was early in the development of the comic book art
form with writers and artists still figuring how to make this new
venue work for them.

What readers will find - and why I consider the book a worthwhile
addition to my home comics library - is a wild inventiveness mixed
with a sometimes crude energy that delights me on an entertainment
level and for its historical value.  I also enjoy the variety this
title offered with super-heroes, cowboys, inventors, pirates, cops
and pilots all represented with the pages of each of the volume’s
four collected issues.

The original Daredevil is the star of the book and his battles with
the gruesome Claw are even bigger than most super-hero adventures
of the era.  In his final story of this volume, Daredevil contends
with the murderous Scarlet Skull.  This villain bears more than a
passing resemblance to the Red Skull, who had made his debut just
a few months earlier in Captain America #1.

Captain Battle and Silver Streak are fun. I was amused by both of
them getting a kid sidekick in the same issue.  Silver Streak was
still one up on the Captain, though, because the speedster also had
an eagle sidekick.

The Pirate Prince is a favorite of mine.  His mission is to rescue
slaves being transported across the oceans.  It’s more swashbuckler
than social commentary, but is still an amazingly forward concept
for a 1940s comics feature.

Dickie Dean, Boy Inventor is another of my Silver Streak favorites
as he uses his own clever devices to foil evil scientists.  Maybe
not a blindingly original character, but still big fun.

The contributors to these Silver Streak issues include some of the
most legendary comics creators of the 1940s: Bob Wood, Jack Cole,
Fred Guardineer, Dick Briefer, Jack Binder and Don Rico.  There’s
also a cool foreword by Michael T. Gilbert. It’s a well-made book
that will entertain you for many hours and it definitely earns my
recommendation.

Also from Dark Horse, we have Crime Does Not Pay Volume 3 [$49.99],
reprinting issues #30-33 [November 1943 to May 1944] of the best-
selling crime comic book of the 1940s.  Of historical importance,
Alvin Hollingsworth’s “The Million Dollar Robbery” from issue #31
[January 1944] is possibly the first story in US comic-book history
drawn by an African-American artist.

With somewhat factual stories frequently narrated by the spectral
Mr. Crime, these issues featured real-life criminals as portrayed
by notable artists like Charles Biro, Bob Wood, Dick Briefer, Jack
Cole, Rudy Palais and a young Carmine Infantino. In particular, the
stories by Cole and Briefer practically leap from the pages with
their deceptively cartoonish appearance.

Crime Does Not Pay is a journal of its time, its existence born of
the American fascination with gangsters and killers, the very same
fascination that made the Dick Tracy comic strip such an incredible
success.  Full-page scenes of mayhem and violence dramatically show
the difference between the American comic strip and comic book and
how the latter used its fluid layouts to great effect.

Putting on a time-stamp on these reprints, issue #33 [May 1944] has
an inside front cover message from publisher Lev Gleason explaining
how wartime paper shortages forced the title to reduce its page
count. To counter this, Gleason dropped Crime Does Not Pay’s usual
seven pages of paid advertising to give his readers almost as many
story pages as previously.

Crime Does Not Pay Volume 3 is another must-have for this student
of comics history and again gets my high recommendation.