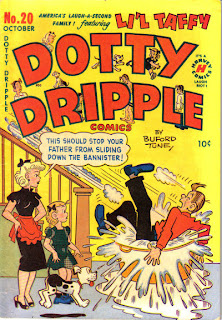 ﻿Dotty Dripple #20 [Harvey Comics] was published in the month of my
birth.  Having never seen an issue of the comic book of the comic
strip by Buford Tune, all I know is what I learned from visiting my
late friend Don Markstein’s Toonopedia.

Dotty was a domestic comedy, a Blondie knockoff that nevertheless
was entertaining and popular enough to run for three decades from
1944 to 1974.  She was also licensed to appear in comic books and
was published by three different companies:

Magazine Enterprises, where she was one of several features in some
early issues of A-1 Comics and then the star of two issues of her
own title (1944-1946);

Dell Comics, where a half-dozen issues appeared as part of Dell’s
Four Color Comics between 1955 and 1958 as Dotty Dripple and Taffy.
Taffy was the daughter of Dotty and Horace and her name was a lot
larger on the covers than Dotty’s.

The Grand Comics Datebase doesn’t much have information on Dotty’s
comic-book appearances, but it seems the ME comics were reprints of
the comic strip and that may also be the case for the issues that
were published by Harvey.  However, judging from the page lengths
of the stories, the Taffy-centric issues published by Dell had new
material done for the comic book.

As always, those of you who know more about the Dripple family are
welcome to share your knowledge with me.  For more comics from the
month of my birth, keep reading this bloggy thing. 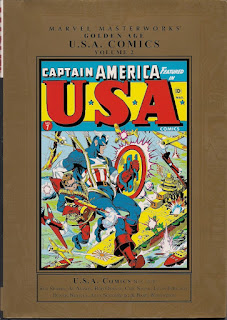 Marvel Masterworks: Golden Age USA Comics Vol. 2 [$64.99] isn’t for
everyone.  This hardcover volume reprints issues #5-8 of the title
from 1942 and 1943 and the quality of these stories is as uneven as
you’d expect from comics produced on the quick and without a whole
lot of premeditation.

Timely Comics had but three super-hero stars in the 1940s: Captain
America, the Human Torch, and the Sub-Mariner.  They had a number
of intriguing second-stringers, third-stringers, and one-appearance
wonders, but none of them rated with the big three.  Despite this,
it took until USA Comics #6 for Captain America to join the book’s
roster and add newsstand appeal to the covers.  Save for the rather
nondescript Sergeant Dix, none of the strips from USA #5 would make
another appearance in the title.

Unlike Dr. Michael J. Vassallo, who wrote an informative intro for
this volume, I’m not much of a comics historian.  So all I have for
you are some quick thoughts on the characters and stories in this
collection that sparked my interest.

The Victory Boys (USA #5) are three young kids in ill-fitting long
johns who are apparently living in Germany’s Black Forest and who
trounce Hitler, Mussolini, and Hirohito in eight very weird pages.
I’m not making this up.

Then there’s the Fighting Hobo (USA #5).  He’s an actual hobo who
rescues a wealthy woman’s pets from dog-snatchers.  I’m still not
making this up.  Honest.

Roko the Amazing is a ripoff of Fawcett’s Captain Marvel.  But the
art by penciler Jack Alderman and an unknown inker is pretty good
for the era.

Then there’s Gypo the Gypsy Giant and Bobby (USA #5).  Gypo is the
least scary giant you could imagine.  Young Bobby offers to pretend
to be frightened to make him feel better.  Add Gypo’s shrewish wife
and his man-faced pet dragon and you gotta wonder if psychedelics
were involved in the production of this story.

Captain America adds star power to USA Comics starting with issue
#6.  Unfortunately, all three of his adventures (one per issue) are
hopelessly padded and hopelessly tedious.  The art is just as bad,
especially in issue #8's “The Invasion of the Killer Beasts!”  The
art in that one is awful even by the lowest standards of the era.

I got a chuckle out of Jeep Jones (USA #6-8).  Drawn by Chic Stone,
the strip features an insanely inventive enlistee who is compelled
to do things with jeeps and tanks that confuse both the enemy and
our own soldiers.

The whole deal of Jap-Buster Johnson (USA #6-8) is that he really
hates the Japanese enemy.  Nicely drawn by Dennis Neville, Johnson
reminds me of a less psychotic Frank Castle.

There are a number of costumed heroes in these issues: the original
Black Widow, the Blue Blade, the American Avenger, the Destroyer,
the Whizzer, Captain Daring, Marvel Boy, and some kid known as the
Secret Stamp.  The stories of that last one have a strange design;
every page looks like a Sunday newspaper strip.

Remember how I said this book wouldn’t be for everyone?  I dig it
because I love to see comics from the 1940s and because the oddball
heroes fascinate me.  However, given the less-than-stellar quality
of the stories and art, you might decline to plunk down your cash
for this volume.  On the other hand, buying the original issues in
merely good condition, assuming you could even find them, would set
you back over $1,700.  By comparison, this book is a real bargain.

Okay, maybe not a bargain, but worth checking around to see if you
can get a deal on it from your friendly neighborhood comics shop,
from an online seller, or from a comics convention exhibitor trying
to reduce inventory.  Sometimes the hunt is half the fun.