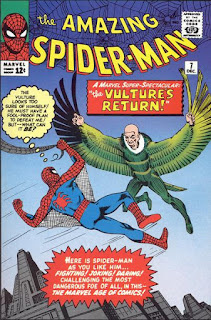 “Peter, sometimes I get the feeling that you’re laughing at a
secret little joke that’s all your own!”


Our theme this month is Spider-Man 50th anniversary and, for once,
I’m not even going to mock editor Brent Frankenhoff in my opening
remarks.  Created by writer/editor Stan Lee and artist Steve Ditko,
Spider-Man was as much a comics game-changer as Superman, Batman,
or the Fantastic Four.  Clark Kent just pretended to be one of us.
Peter Parker was the real deal.

Spider-Man made a guest appearance in 1963's Fantastic Four Annual
#1 - the greatest comic book of all time - but I didn’t really get
to know him until I bought Amazing Spider-Man #9 [February 1964].
I was 12, Peter Parker wasn’t much older.  Yet there he was, just
a teenager dealing with adult situations like making money for his
aunt’s medical bills and falling in love with Betty Brant.  That he
fought super-villains was also pretty cool, but even Robin the Boy
Wonder did that and in short-pants to boot.

After reading “The Man Called Electro!”, I desperately wanted, nay,
needed every issue of Amazing Spider-Man.  I traded for the issues
I didn’t have with friends, with classmates who didn’t want anyone
to know they still read comics and who practically gave me issues
so I wouldn’t reveal their secret, and even with the neighborhood
barber.  When the local supply dried up, I bought back issues from
a mail-order dealer.  My parents didn’t understand why I would pay
a dollar and more for one comic book, but they went along with it.
They gave me wings; it was up to me to determine the flight path of
my life.

Ditko created a visual world for Peter and Spidey that seemed like
the real deal to me.  He designed one of the all-time great super-
hero costumes.  He designed characters who fit his world perfectly.
He drew fight scenes that exploded with movement and excited me as
no others.  Over in the Fantastic Four and Thor and other Marvels,
Jack Kirby drew gods and heroes in spectacular combat.  Ditko drew
street and skyscraper brawls.

But it was Lee’s words that sealed the deal and made Spider-Man my
favorite of these new Marvel heroes.  The issue that settled it was
Amazing Spider-Man #7.  It arrived in the mail, it was read before
I did my homework - sorry, Mom - and it was read three or four more
times before I went to bed that night.

The issue featured Spider-Man’s second battle with the Vulture and
much of their fight took place in the hallways, offices, and even
printing plant of the Daily Bugle.  Spidey beats the bad guy, only
to have publisher J. Jonah Jameson get in his face.  Tired of JJJ’s
mouth, Spidey webs it shut.  I’d never seen Robin, Superboy or any
member of the Legion of Super-Heroes doing anything half as cool.
But that wasn’t the clincher for me.

The clincher was the last three panels of the issue.  A cursing JJJ
storms past the desk behind which his secretary Betty, now joined
by Peter, had been hiding during the Spidey/Vulture battle.  When
Peter makes a snarky comment about JJJ, Betty chides him with her
wagging finger, faux-angry smile, and the dialogue you read at the
start of this column.  Without even knowing it, Betty has figured
out an essential part of Peter’s character.

Peter flirts with Betty, which comes as a surprise to her.  Then he
tells Betty to put her head on his shoulder and enjoy the silence.
Then comes this exchange...

Betty: But what will Mr. Jameson say?

Peter: Nothing, baby...for at least an hour!

Every time I read that line that night, I laughed out loud.  When
I read it today, I still smile.

Spider-Man has rarely had it as good as when Lee, Ditko, and then
John Romita were presenting his adventures, but there have been a
lot of great Spider-Man comics over the past half-century.  Those
are the ones I remember and cherish. 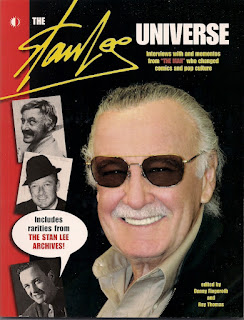 Spider-Man has two dads and one of them has his very own universe.
Edited by Danny Fingeroth and Roy Thomas, The Stan Lee Universe
[TwoMorrows; $26.95] features a compendium of interviews, mementos,
and rarities from the Stan Lee archives.

The “Wow” factor of this book is as amazing as Lee itself.  There
are interviews from the 1950s and 1960s, including the transcript
of a radio debate with a colleague of Dr. Fredric Wertham.  (Yes,
I’m biased, but I think Stan emerged victorious in that encounter.)
There are articles describing Stan’s encounters with famous movie
directors, musicians, and others.  There are promotional materials
in which Stan promotes various products and his speaking services.
There is remarkable correspondence on possible Marvel projects with
Will Eisner and Richard Corben.  There are rare photographs, tips
for writers, and even a few pages on Stan’s more recent ventures in
comics and beyond.  Like I said: Wow!

Danny and Roy - hey, Stan always kept things informal when I worked
for him - have done an outstanding job giving us a look at one of
the most remarkable men in popular culture.  They left me wanting
more.  Say “sequel” with me.

Of course, as I told Stan when I wished him a happy 89th birthday
in December, it’s always been a Stan Lee universe.  The rest of us
are just lucky enough to live in it.

On Tuesday, the Akron Beacon Journal printed this week’s Doonesbury
strips (Monday and Tuesday) on its editorial pages while continuing
to run the reprints on its comics pages.  No explanation was given
in the print edition as to why the paper decided to do this a day late
in the game.  I’ll see if I can find out anything.

While I do that, does anyone know of any other paper running both
the new strips and the reprints?  I’m curious.