MY, WHAT AN INTERESTING NOSE! 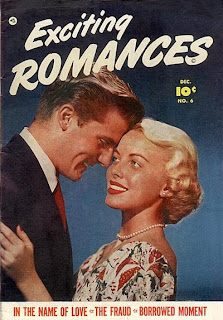 ﻿Exciting Romances #6 [December 1951] was one of 21 romance comics
that hit the newsstands in the month of my birth.  Six of them were
published by Fawcett, including this one.  The couple on this photo
cover look maddeningly familiar to me, but I can’t identify them.
Whenever I try to study the cover, I get distracted by the heroine
looking so intently at the hero’s nose.  Then I start thinking of
the classic Asterix and Cleopatra graphic album wherein Asterix and
other characters comment on what a lovely nose Cleopatra has...and
then I start giggling.

You know the drill.  Keep reading my bloggy things for more comics
from my birth month.

I’ve had Captain Britain Vol. 1: Birth of a Legend [Marvel; $39.99]
for a while, but just got around to reading it earlier this month.
It reprints the made-in-the-USA and published-in-the-UK adventures
of the title character.  Chris Claremont was the original writer of
the series wherein college student Brian Braddock is recruited by
Merlin and Roma to become England’s super-hero.  Other writers
in this volume: Gary Friedrich, Larry Lieber, Bob Budiansky,
Jim Lawrence, and Len Wein.  Herb Trimpe was the first artist and
drew 23 episodes of the weekly comics feature.  He was followed by
John Buscema and Ron Wilson.

Though my first job at Marvel Comics was assisting Sol Brodsky and
Stan Lee in putting together British weeklies like The Mighty World
of Marvel and Spider-Man Comics Weekly, I was no longer working at
Marvel when the company launched Captain Britain.  The only early
stories I ever saw were those reprinted in edited form in the back
of Marvel Tales.  Given my own association with the weeklies, I was
curious about these tales.  So much so that I used a couple Amazon
gift cards to buy both this volume and the second one.

My curiosity has been satisfied, albeit in a disappointing manner.
These 41 stories are, at best, passable generic super-hero tales.
The stories are padded with ill-conceived twists and, by the time
we get guest appearances by Captain America and Nick Fury, we also
get groan-inducing dialogue.  Cap doesn’t sound like Cap, Nick just
barely sounds like Nick, the Red Skull worships Hitler, and there
are numerous soccer references clumsily inserted into Cap Britain’s
speech patterns.  It was a struggle to get through the collection.
It’ll be a while before I crack the second volume.

The most positive thing I can say about this book is that this is
rare material you won’t easily find elsewhere.  If you’re a Marvel
fanatic - and given the importance Captain Britain would eventually
assume in the Marvel Universe - you’ll want to read this book.  I
recommend looking for a bargain price.

Make me “somewhat undecided” on Fatale by Ed Brubaker with artist
Sean Phillips [Image; $3.50].  As with their earlier works, Fatale
is very well-written and drawn.  I’m just not sure this particular
blend of crime and the supernatural is floating my boat.  However,
two issues in and I’m definitely intrigued enough to keep reading.
I’ll check back in with you on Fatale in a few more issues.

Before starting to catch up on the last few years of Spider-Man, I
read Spider-Girl #1-8 by Paul Tobin with art by Clayton Henry and
others.  Anya Corazon is the second Spider-Girl and the first for
the regular Marvel Universe.  I’m not completely clear on how she
got to be Spider-Girl or her background, but I enjoyed these eight
issues.  I got a kick out of her tweeting as Spider-Girl and that
Tobin didn’t ignore the consequences of that tweeting.  I felt the
Marvel Universe did not overpower the stories, but actually worked
with them.  Unfortunately, it seems the title was canceled with the
eighth issue.  Sigh.

Anya also starred in a three-issue Spider Island tie-in series.  I
will read and write about it when I catch up to the Spider Island
event.

The Green Lantern episode - “Into the Abyss” - was good, not great.
The Kilowog/Razer conflict has become tiresome; Hal Jordan is not
an easy fit for the adult of the team.  But I do like the expanded
role for Aya, their navigation unit.  Maybe she should become the
adult of the team.

The shorts? The British claymation stuff leaves me cold, much like
much if not most Brit humor.  The Plastic Man short was better than
the first one in that it amused me.  I was pleasantly surprised by
the appearance of the Granite Lady, a Plas villain from the 1940s.

The Young Justice episode - “Agendas” - was the star of the hour.
The “A” story was a terrific focus on Superboy with, remarkable as
it will sound coming from me, a good role for Lex Luthor.  The “B”
story hinted to intriguing conflicts between members of the Justice
League.  I love the idea of a future appearance by Icon and Rocket.
I despise the ugly Hawkman and Hawkwoman costumes.  One of the best
Young Justice episodes to date.

These are two of the single-page “fact” features I wrote a bunch of
for the various Marvel black-and-white horror magazines.  I liked
writing them.  They were fast and fun.  The first one was drawn by
Ernie Chan and the second one is uncredited, but it might also be
by Chan.  In addition to these gems, you’ll find stories by my pal
Don McGregor, Carla and Gerry Conway, Marv Wolfman, Larry Lieber,
Doug Moench, Chris Claremont, and John Warner...with art by Mike
Vosburg, Joe Staton, Alfredo Alcala, Tony DeZuniga, Russ Heath,
Virgilio Redondo, Jesus Blasco, Sonny Trinidad, and Yong Montano.
Around 200 pages of black-and-white chillers.

My delight in receiving the small check?  It’s further confirmation
that I never have to chase Marvel Comics for such payments.  Over
at DC, they tend not to pay me for all sorts of stuff they owe me
money on.  When the checks come - and they don’t always come - the
statements often seem to be based in some alien mathematical system
far beyond my earthly understanding.  I’m just saying.