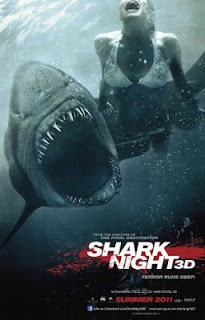 ﻿Most of you get that this bloggy thing of mine is as much personal
therapy for me as entertainment for my rollicking readers.  Note to
self: use “rollicking” as seldom as possible.

I have been experiencing more “depression days” of late.  Which is
not unusual given all the depressing things in the world and which
is not a call for your sympathy.  My depression is what it is and,
thankfully, the most important parts of my life - my children and
my wife and my marriage - are safe and secure.  I consider myself
a very lucky man.

One of the ways in which I cope with depression, especially on days
when it becomes clear I will not accomplish anything particularly
constructive, is to surrender to the malaise and watch a couple of
movies.  Hence, the title of today’s bloggy thing.

On the depression day of which we speak, I had checked out movies
from my local library system.  This saved me from having to think
about what movies I wanted to watch.  Depression days and thinking
are not often a good match.

Twenty-five million dollars died to make Shark Night 3-D.  Since I
don’t much care for 3-D, I waited to see it until I could get the
2-D Blu-ray version for home viewing.  I’ll be heading into spoiler
territory in a bit, so while you prepare yourself for that, I will
give you my 3-D rant.

A good movie brings me into its story and characters.  It doesn’t
need 3-D and I don’t need to pay extra to see 3-D special effects
at the movie theater.  I’m secure in that position.  The only thing
that baffles me is that how is it possible that the current mania
for 3-D is lasting longer than the past two manias for 3-D.  Have
we learned nothing from yesterday?

In Shark Night (2011), a group of college students go to a secluded
vacation home off a salt-water lake.  Where, of course, their cell
phones won’t work.  Then comes sharks, dismemberment, and various
bloody deaths.  Even in 2-D, you can pretty much tell where all the
3-D special effects happened.  The best actor in the entire movie
is the heroine’s dog.

The best thing about Shark Night are its villains.  Their brilliant
plan is to fill a salt water lake with all kinds of sharks and then
films those sharks eating people and then sell the videos to people
who want more gore than the Discovery Channel’s Shark Week offers.
While I’m a little unclear how the seemingly inbred villains were
able to pull this off, it’s more of a plan than we usually get in
movies like this one.  That the villains are also sociopaths kind
of adds to their evil charm.

At the end of the movie, after all but the heroine and the hero and
the heroine’s dog have died, a great white shark breaches the water
by their boat.  It may be just the 2-D version of the obvious 3-D
effect, but, it looked like the shark was bigger than the boat.  If
it was, indeed, bigger than the boat, then the hero, heroine, and
heroine’s dog died horribly.  I liked that dog.

Of the three shark movies I’ve watched this year, Super Shark ranks
first by a wide margin.  Which is like being the first actor to get
eaten by a shark in any of these movies.

Shark Night comes in second because it had better sharks, a really
smart dog, and decent villains.  I liked that dog.
2-Headed Shark Attack finishes last.

I’m still waiting for Sand Sharks to be released in a format I can
watch on my DVD player.  Amazon only has the U.K. version.

Are there any other recently-released shark movies I should check
out?  Or will my weekend’s cheesy monster movie watching consist of
Leprechaun, Leprechaun 2, Leprechaun 3, and Leprechaun's Revenge on
the SyFy Channel?  Faith and begorra! 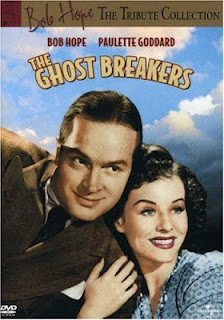 If the first movie of my depression day double-feature fit my mood,
the second lifted it.  I watched The Ghost Breakers, a 1940 movie
starring Bob Hope and Paulette Goddard.

Hope is radio crime reporter Lawrence Lawrence.  On the eve of his
departure for a vacation, he gets a local gangster pissed off and
has to go to the guy’s hotel room to make amends.  However, before
he has a chance to do that, he’s caught in a hotel hallway shootout
between two men from Cuba.

Lawrence mistakenly believes he killed one of the men. He hides in
the room of Mary Carter (Paulette Goddard), a feisty, pretty young
woman who’s just inherited a legendary haunted castle in Cuba.
Capricious fate lock Lawrence in Mary’s trunk.  Well, Cuba in the
1940s is as good a place for a vacation as any, Mary’s very pretty,
and Lawrence’s curiosity has been grabbed.

With his valet Alex (Willie Best), Lawrence is determined to find
out why unknown people want to buy Mary’s castle or scare her away
from it...and if the legends about a castle ghost are true.  More
I shall not reveal because this movie is definitely worth tracking
down and watching.

Walter DeLeon adapted the movie from the play The Ghost Breaker by
Paul Dickey and Charles W. Goddard.  His script combines humor and
suspense.  Hope doesn’t break character - as he often did in films
- and is effective as the brave-but-not-stupid Lawrence.  Goddard
manages to portray Mary Carter as New York tough with a soft side.
Best, though burdened with the stereotypes of the era, does a fine
job as suffering straight man to Hope and his character is several
notches above those usual stereotypes.

Hope and Goddard starred in two other films: The Cat and the Canary
(1939) and Nothing But the Truth (1941).  I’ve put in requests for
both with my local library system.  Let’s hope they get here before
Saturday or I’m stuck with those Leprechaun movies.