SUNSET CARSON RIDES INTO THE SUNSET 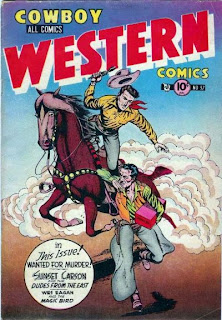 ﻿Sunset Carson (real name Winifred Maurice Harrison) starred in 21
“B” westerns from 1944 to 1950.  His career in comic books was not
as successful.  He had four issues of his own Charlton Comics title
and appeared in Cowboy Western Comics #27-30 and #35-37.

Cowboy Western Comics #37 [February-March 1952] was Carson’s final
appearance in that title.  He had two stories in the issue, one of
them drawn and signed by W.A. Szantay, of whom not much is known,
and the other by the great Fran Matera, whose work I remember most
fondly from Treasure Chest in the 1960s.  Treasure Chest
was sold through Catholic schools though, near the end of its long
run, it also appeared on newsstands.

The cover of Cowboy Western #37 is drawn by Clinton Harmon.  Inside
the issue, Harmon seems to have drawn everything other than Sunset
Carson: Western Wonders, Legends of Paul Bunyan, Denver Mudd and
Bushey Barns, Happy Homer, Li’l Hootie, Pecos Bill, and Chuck Wagon
Gus.  The Grand Comics Database also credits him with writing all
but the first two of those features.

Cowboy Western Comics #37 hit the newsstands in December of 1951,
the month I was born.  The title amuses me because it strikes me as
redundant.  Where else would you find cowboys other than the West?
I started coming up with other combinations of jobs and westerns:
Cattle Rancher Western Comics, Banker Western Comics and Saloon Gal
Western Comics.  Sadly, I have way too much time on my hands these
days. 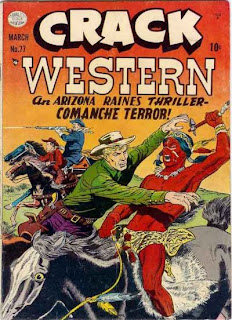 According to the GCD, Reed Crandall drew the cover of this issue.
Inside the issue, the nine-page “Arizona Raines” story was drawn by
Paul Gustavson.  Also in the issue: Two-Gun Lil (drawn by Pete
Morisi, 5 pages); Bob Allen Frontier Marshal (Harry Anderson, 7
pages); and the Whip (Charles Sultan, 7 pages).

I couldn’t resist the urge to give you back-to-back western comics
today.  For Monday, I’ll have three crime comics. 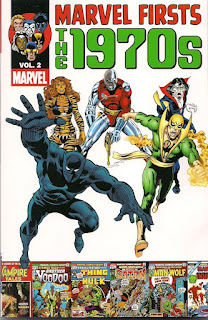 Marvel Comics is dangerously close to having reprinted every story
I ever wrote for them.  Marvel Firsts: 1970s Vol. 2 [$29.99] adds
another to the list by including my first “It, the Living Colossus”
story from Astonishing Tales #21 [December 1973].

“It” came about because Supernatural Thrillers #1's adaptation of
Theodore Sturgeon’s classic prose story of that name sold amazingly
well.  So the brass wanted an “It” comic book.  Complicating this
was that Marvel has already started publishing its own variation on
the swamp monster theme with the Man-Thing.  So Roy Thomas asked me
to come up with a new “It” for the new series.

The Colossus had originally appeared Tales Of Suspense #14 and #20.
When those stories were reprinted in Monsters On the Prowl #17 and
#25, there was a spike in sales.  Knowing that, I suggested to Roy
that we make the Colossus our new “It” and he thought that a good
idea.  As I recall, my pitch for the book was a verbal one between
Roy and myself.  Though a text page also credits Don McGregor and
Marv Wolfman for helping with the series, I don’t remember either
of them being in the creation conference.  I suspect I bounced some
ideas off them at a later stage...which wasn’t uncommon for me in
the early days of my career.

My original concept was for Bob O’Bryan, his wife Diana, and there
two pre-teen children to all be involved in the stories.  While Bob
would be the primary “controller” of the Colossus, both kids would
be able to control the statue as well.  Roy rejected that notion.
Instead, we took the disabled hero route which had worked well for
Marvel with characters like Iron Man and Daredevil.

Following an accident secretly caused by a jealous actor, O’Bryan
would end up in a wheelchair and, being foolish noble, would drive
his fiancee Diane away from him.  However, just as aliens had been
able to control the Colossus by projecting their consciousness into
the statue, Bob found he could do the same thing.

My love for Marvel’s giant monsters provided lots of enthusiasm on
my part, but, alas, that didn’t translate into good sales.  There
were only four issues of “It” before he was bounced from his book
to make room for Rich Buckler’s Deathlok.  Sigh.

I could do an entire bloggy thing on the Colossus, but we’ll save
that for some future date.  In addition to this origin tale, this
second volume of Marvel Firsts: 1970s also reprints two stories I
plotted which were then scripted by Chris Claremont.

“War Is Hell” from War Is Hell #9 [October, 1974] introduced John
Kowalski, a man cursed to live in the bodies of others during WWII.
It has been reprinted previously in Marvel Ghost Stories.

“The Serenity Stealers” is a black-and-white Tigra story that ran
in Monsters Unleashed #10 [February 1975].  It takes place between
the often-reprinted Tigra debut in Giant-Size Creatures #1 and the
first story of her short-lived series that began in Marvel Chillers
#3.  The story is drawn by Tony DeZuniga.

Marvel sends me royalty checks when they reprint my work.  Without
me having to chase that money.  The amounts vary depending on how
well the books sell, but, in case you were wondering, I do get paid
for these timeless classics.  I like that.

As for the other firsts appearing in this volume, the roster reads
as follows: Morbius, the Living Mummy, Brother Voodoo, the first of
the Thing team-ups, the Black Panther, Satana, Son of Satan, Sons
of the Tiger, Iron Fist, the Golem, Man-Wolf, Deathlok, Gabriel:
Devil Hunter, Howard the Duck, the Invaders, and the all-new X-Men
that would soon take comicdom by storm.   That add up to 374 pages
of 1970s fun.  I’m looking forward to reading it.