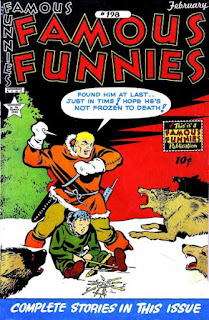 ﻿Famous Funnies is considered by many to be the first true American
comic book and you can include me with the many.  Maxwell Gaines,
a salesman for Eastern Color Printing and Harry I. Wildenberg, his
sales manager, teamed with Dell Publishing for the one-shot Famous
Funnies: A Carnival of Comics, a 36-page one shot reprinting comic
strips from the newspapers.  Dell declined to continue the title,
so Eastern Color published Famous Funnies #1 [July 1934].  The 68-
page comic book launched an ongoing run that continued until 1955.

I wish I could tell you more about Famous Funnies #198, which hit
the newsstands in my birth month of December 1951.  Alas, I have no
specific information on the contents of that issue.  However, I can
at least mention some of the newspaper strips that were featured in
issues before and after this one:

Scorchy Smith was an adventurous pilot for hire.  He was created by
John Terry in 1930.  Terry passed away in 1933 from tuberculosis.
The comic strip was continued by other artists, starting with Noel
Sickles and then Burt Christman, Robert Farrell, Frank Robbins and
others.  It ended in 1961.

Dickie Dare was the first comic strip created by Milton Caniff.  It
starred a boy who would dream himself into fantastic adventures and
made its debut in July of 1933.  About a year later, Caniff added
freelance writer Dan Flynn to the strip and Dickie started having
real adventures.  When Caniff left to do Terry and the Pirates, the
strip was continued by Coulton Waugh.  The strip ended in 1957, by
which time Dickie was a Navy cadet.

Other Famous Funnies features from this period included Steve Roper
(an adventurous photojournalist), Napoleon (an Irish Wolfhound),
Bobby Sox (a panel and Sunday strip named for the teenage fashion
and starring a young lady named Emmy Lou), Oaky Doaks (a farm boy
in King Arthur’s time who made a suit of armor to seek knighthood)
and Ben Friday (a bodyguard and troubleshooter).

I await further Famous Funnies illumination from more knowledgeable
comics fans than your humble blogger.  You, my beloved readers, are
doubtless eagerly awaiting more comics from the month of my birth.
You will not be disappointed.

Feeling a bit more depressed than usual as I write this, so, sans
any desire to review anything, I’ll just ramble on a bit about this
and that.  Just stuff that pops into my mind between here and the
end of today’s bloggy thing.

I was a bit premature in wrapping up the local newspaper reaction
to the Doonesbury strips about the insanely intrusive abortion laws
of Texas.  There were more letters in each of my three newspapers:
the Akron Beacon Journal, The Cleveland Plain Dealer, and even the
Medina Gazette.  They were split pretty evenly between pro-choice
and pro-life advocates with one of them applauding that the paper
ran the Doonesbury strips.

The only one that bothered me was the Gazette letter and not merely
because it was of the “you’re a murderer if you don’t agree with my
position” variety.  The writer objected to Doonesbury appearing on
the comics page and, indeed, any comic strip appearing on the page
that wasn’t, you know, comic.

Comic strips and comic books have never been strictly comical.  Not
in the entire history of the medium.  The art form has been used to
express political positions, to shine a line on the hardships that
people face in their lives, and much more.  If I had to adhere to
such a rigid “rule,” whether it be that I had to be funny or that
my super-hero stories had to be about good and evil as expressed in
black and white terms, I’d have little interest in writing comics.
The art form is bigger than that and I like to think Tony Isabella
is bigger than that as well.

I’m on a few “comics pros only” mailing lists and just saying that
probably violates Fight Club rules, but if I can’t trust my bloggy
thing readers, who can I trust?  I recently posted the following on
one of those lists and thought it was good enough to share with you
here as well...

With no new writing gigs on the horizon, I'm shifting to a garage
sale and eBay-based economic model.  At least for the spring and
summer.  The theory is that this will allow me to work through my
current go-round with depression while making a few bucks.

I'm not going to turn down any decent gigs or stop writing, but I
am very much soured on the comics industry right now.  I think the
last straw was when a major convention told friends that they won't
invite me to be a special guest because they are afraid I'd attack
one of their guests - someone on this list - on a panel.

Who can blame them, given all those times in the past when I've
attacked people on panels?  Unless someone would consider that I’ve
never done that.  But, truth is outmoded as a factor in decision-
making or belief systems these days.

Anyway, just to ease your minds, no one on this list has any reason
to fear me.  Unless, of course, I'm wearing a hoodie.

A well-meaning neighbor suggested I find backers and start my own
publishing company.  It's amusing when people think so highly of
one without knowing anything about their business.

Even if there were such backers out there, one of the things I have
come to accept about myself is that, while I might be a terrific
writer, I'm a terrible businessman.  I wouldn't trust me to run
even a small company.  Heck, I barely trust myself to run my garage
sales.

It's an interesting life I’ve lived and live.  Most importantly, my
wife and kids are doing great.  That's what’s most important to me
and that I can contribute to helping them in myriad ways.