THE ISLAND OF CONQUERORS 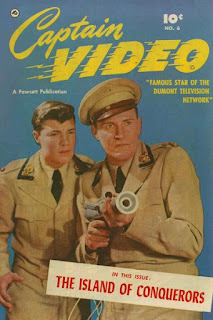 ﻿Captain Video and His Video Rangers was the first science fiction
TV series and aired from June 1949 to April 1955.  At least that’s
what Wikipedia says and, since I never saw the show as a kid, all
I know is what I read in that entry.

Captain Video #6 [December, 1951] had a photo cover of Al Hodge as
Captain Video and Don Hastings as the Video Ranger.  According to
Wikipedia, Hodge was the second Captain Video.  Again, I never saw
the show.  I’m pretty sure my parents had a TV set in our Detroit
Avenue home - we had the top half of a two-family home owned by my
maternal grandmother - but, outside of a cartoon character by the
name of Scrappy, I can’t remember what we watched.  Later, when we
moved to the Peony Avenue address, we had a fairly large TV set in
our living room and that I remembered.  Watched a lot of cartoons,
comedies, and old westerns on that set.

Published by Fawcett, Captain Video #6 was your basic 36-page comic
book.  There were two stories starring Captain V: “A-Bomb Sabotage”
(11 pages) and “The Island of Conquerors” (10 pages).  Both tales
were penciled by George Evans and inked by Martin Thall.  The rest
of the issue: a four-page Rod Cameron western comics story, humor
pages with Pilot Pete and Airfield Al, a text story, a single-page
filler in which the Captain talked to his readers about fair play,
and a color photo of Al Hodge.

I got to meet and work with George Evans once.  He drew a bunch of
pages in an issue of Super-Villain Team-Up I wrote and which was so
late by the time I got the assignment that we had to split up the
story between a few different artists and use some inventory pages
by the late Bill Everett from some unpublished Doctor Doom story.
Outside of the Everett pages, I wrote a full script for this issue.

Evans was typical of the artists who came into comics well before
my time.  He was friendly and gentlemanly.  He told me how much fun
he had drawing my script, commenting on the humorous asides I would
include with the panel descriptions.  I wish I could have done more
comics with him, but, by that time, with Roy Thomas having stepped
down from the editor-in-chief position, I had little to no say over
what assignments I would get and who I would work with.  It wasn’t
a fun time for me, but I tried to make the best of it.  Including
moving back to Cleveland for several months.  One of these bloggy
things, I’ll get back to writing about my career in comics.  It’s
not something I feel driven to do at the moment.

On his 60th birthday, flushed with the wisdom that comes with such
advanced age, my good friend Mark Evanier tweeted:

Right-wing provocateur Andrew Breitbart has died. Hope no liberal
is as nasty about the deceased as he was when Ted Kennedy passed.

I was determined to ignore Breitbart’s death.  I expected I would
be sorely tempted by the absurd glorifications of the man from the
right-wing extremists who command so much attention in our country,
but felt I could ignore those ridiculous tributes as I ignore most
right-wing inanity.  I was resolute in my determination until the
conspiracy theories started to appear.

It seems Brietbart had been promising to release videos that would
damage President Obama’s reelection.  Surely, then, it couldn’t be
a coincidence that Brietbart “died” before those videos were shown
to the public?  Shades of Vince Foster!

Since the right wingnuts have chosen to go that route, let’s state
what is demonstrably true:

Brietbart was a fraud and a liar.  He did evil things.  He attacked
ACORN with doctored videos with the intent of making it more
difficult for the poorest members of our society to have a voice in
public affairs.  He doctored video to smear USDA official Shirley
Sherrod as a racist and then gloated about the deception.  He was
not a “prankster” as some claimed.  He was a man to whom deceit was
his life’s blood.  In a class war against the middle class and the
poor, he was a classless warrior without any discernible sense of
decency or honor.

Did I want Brietbart dead?  Of course not.  I wanted him exposed,
which he was to all but his ethically-challenged fellow travelers
and followers.  I wanted him disgraced, as he surely deserved while
he was alive and deserves in death.

However, to quote the eloquent Harlan Ellison:

“As for [Brietbart], I cannot seem to work up too much angst at his
passing. I feel I am not alone in this.”

Brietbart’s noxious websites will continue.  They are a sad legacy
of a life misspent.

It may be too late to steer today’s bloggy thing into less stormy
waters, but I’ll give it a shot.

Ansible is an online science fiction newsletter written/published
by the UK’s David Langford.  Scott Edelman and Lovern Kindzierski
alerted me to the fact that a portion of an old fanzine column of
mine, a column with for Gary Groth’s Fantastic Fanzine in the very
early 1970s, is quoted in this month’s Ansible under a sub-heading
“Voice of Prophecy, 1970.”

Here’s what I wrote over four decades ago:

“...I must conclude that the staff of New Worlds is a very
pessimistic lot. By their thinking, if the human race makes it to
the 1980s, we'll be reduced to ‘totally subservient, humanized
robots,’ obsessed with our materialism and subject to madness upon
seeing the vastness of the universe. The lucky ones will be
transformed into sex freaks with Dr. Ballard drooling over our
deformed bodies.”

New Worlds was and, apparently, still is a sporadically-published
science fiction magazine that, in the 1970s, was considered the
focus of what was called the “New Wave” of the genre.  Ballard was
J.G. Ballard, a novelist and short story writer, a prominent figure
of that movement.  The New Wave was noted for experimental, avant-
guard fiction or the kind of artsy-fartsy stuff I’ve rarely liked.

As to the accuracy of my “prophecy,” ladies and gentlemen, I give
you the Tea Party and Charlie Sheen.  Scary, isn’t it?

As I rail against the inhumanity of our existence, I can only bend
my head and weep pitifully at the dread knowledge, revealed to me
in an e-mail from Family Video, that, apparently, there is a Tooth
Fairy 2.  Why, God?  Why?