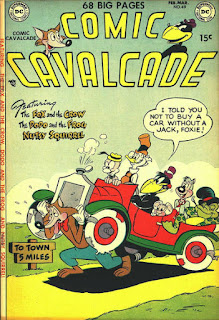 ﻿Out there in America, it’s Super-Tuesday and moronic robo-calls and
even more moronic news-holes trying to make sense of it all.  But,
here in this bloggy thing of mine, it’s comic books and nothing but
comic books.  You deserve a break today.

Comic Cavalcade #49 [DC; February-March 1952] was a 68-page funny
animal comic book that cost fifteen cents and hit the newsstands in
my birth month of December 1951.  I don’t own a copy of this comic
book - sure wish I did - but the Grand Comics Database has provided
me with a list of its contents.

The inside front cover was a public service announcement starring
Buzzy.  He advised the reader to “Be Yourself - Your Best Self!”
The page was written by DC editor Jack Schiff and drawn by Winslow
Mortimer.  Buzzy may be long gone from comics, but that’s still a
good piece of advice.

I love the names of the comics characters featured in this title:
the Fox and the Crow, Fraidy Cat, Blabber Mouse, Bo Bunny, Dodo and
the Frog, Buff and Bobo, Custer Cat and Cheesy the Mouse, Doodles
Duck, and Nutsy Squirrel.  The writers and artists included Sheldon
Mayer, Rube Grossman, Otto Feuer, and James F. Davis.  I have seen
a story of these characters on occasion, but I would be so there
if anyone published a collection of them today.

My most recent “catching up with Marvel” reading is Secret Avengers
and Fear Itself: Youth in Revolt.  When I get current with all the
Avengers titles, I’ll probably focus on X-Men titles from several
years ago with an eye towards getting caught up with them before I
start reading this Avengers versus X-Men stuff.

Secret Avengers was much better than I anticipated.  Issue #15 was
a done-in-one dealing with the Black Widow’s reactions to the death
of [redacted] and the reactions of the staffers of a gossip website
on the often temporary deaths of super-heroes.  It was written by
Nick Spencer with art by Scot Eaton (penciller) and Jaime Mendoza
(inker).  It was a good issue.

Secret Avengers #16-21 were all done-in-one issues by Warren Ellis
and an assortment of artists.  While I enjoyed these issues for the
inventive plots, I didn’t care for Ellis’ handling of Steve Rogers
and his revolving crew of heroes.  The characters didn’t seem like
themselves to me, though, obviously, I see them different than many
and maybe most of Marvel’s current writers.  Still, it was fun to
read complex stories told in a single issue and I recommend them to
you.  I’d love to see more done-in-one comics from both Marvel and
DC and, for that matter, everyone else.

Secret Avengers #21.1 seems to be a transition issue with Hawkeye
being primed to take over these covert missions from the overworked
Steve Rogers.  At last, someone recognizing that these characters
are appearing in so many different Marvel titles and doing so much
that it’s affecting the willing suspension of disbelief necessary
to the enjoyment of super-hero comics.

Rick Reminder’s story and script were terrific.  I actually laughed
out loud at Hawkeye’s dialogue: “I hear Mayor Blacky Von Evilton is
looking for a new P.R. guy.”  The conversations between Hawkeye and
Captain America were dead-on and the Patrick Zircher art was damn
spiffy.  I’m looking forward to future issues of this title.

Fear Itself: Youth in Revolt, a six-issue series by Sean McKeever
with art Mike Norton, never really jelled for me.  There were some
good moments in this tale of neophyte heroes trying to help people
caught in the wake of this year’s epic disaster, but there were far
too many characters, far too many petulant punch outs between those
characters, far too much of the now-typical death and destruction
and, when there could have been a scene of actual emotion and loss,
a literal deus ex machina ending.  The series left me unsatisfied
and, worse, uninterested in any future adventures of these heroes.
Your own mileage may vary.  Let’s face, I’m clearly not a lover of
these big events in either the Marvel or the DC Universe.

I watched Cartoon Network’s new “DC Nation” hour on Saturday.  The
Green Lantern episode was a rerun of the pilot I wrote about here
on December 15, so I won’t discuss that one here.

Young Justice continues to be adequate but not impressive.  While
the notion of a world without adults and a counterpart world sans
children was intriguing, it wasn’t explored as fully as I would’ve
liked.  Which isn’t surprising given the episode’s running time was
under 30 minutes.  If the idea was transplanted to comic books, I
think a good writer could get a compelling six-issue story arc out
of it.  But I digress.

Some of the voice acting in the episode grated on me.  Thom Adcox-
Hernandez’s Klarion the Witch Boy made me wince with every line of
dialogue.  And the stilled speech pattern voiced by Nolan North for
Zatara was so archaic that it made me aware of the voice-acting at
all turns.

The real disappointment was the vaunted “shorts” that ran between
the cartoons.  While the Plastic Man short was somewhat amusing if
horribly overplayed, the others were exactly what I feared they’d
be: hipster humor dismissive and disrespectful of the DC characters
appearing in them.  I shudder at the thought of what will be done
to my Black Lightning.  Where’s Sinbad when you need him?

I’ll keep watching the “DC Nation” hour because I remain a hopeless
fan of these characters and because it doesn’t cost me $2.99 to be
disappointed in the cartoons.  But, more than ever, I miss Justice
League Unlimited and Batman: The Brave and the Bold, shows
I always looked forward to viewing.

On a related note...I have now seen the recent MAD episode with the
parody of “Super Friends.”  I thought it was pretty funny.  Several
readers have asked me if I’ll be paid for the brief Black Lightning
appearance in the bit.  I have two answers to that query: “I don’t
know” and “I don’t think so.”

DC Comics rarely pays me for everything it should pay me for.  The
last tiny check I received from them was for an amount that didn’t
correspond to any single item on the accompanying statement or any
possible combination of items on the statement.  Getting money from
DC is always a crap shoot.

On the other hand, the use of Black Lightning in that MAD episode
strikes me as parody/satire.  Which I wouldn’t expect to get paid
for.  The fact that DC owns both Black Lightning and MAD makes for
something of a grey area, but parody and satire are fairly sacred
to me.  This isn’t an issue for me.