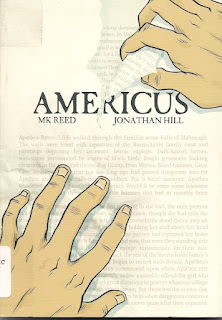 Americus [First Second; $14.99] should have been a far easier sell
to me than it was.  Written by MK Reed with art by Jonathan Hill,
the graphic novel revolves around an attempt by a Christian zealot
to ban a series of fantasy novels from the town library.  Long-time
readers of this publication, back when it was a weekly newspaper,
will recall that my own Medina Library took on and soundly defeated
the area Christian Coalition when the CC attempted to foist its limited
view of what a library should offer its patrons on the rest of us.
The Coalition got so nasty at the time that I began referring to it
as the “Vicious Coalition.”  After its well-deserved dubbing at the
polls, the local branch of the VC faded away, an embarrassment, if
you can imagine such a thing, to the national organization.

So I should have been an easy sell and joined the creators of this
graphic novel and their more enlightened characters in despising
the mother who condemns the books unread and tyrannizes her husband
and kids and sends off her oldest son to military school because he
might be gay.  Yet they made her and her fellows such unbelievable
caricatures that I felt like I was reading one of Steve Ditko’s new
self-published comic books, the ones in which he valiantly battles
and defeats a straw man of his own creation that bears not even the
slightest resemblance to anyone or thing in reality.  Reed and Hill
stacked the deck in the favor of their position.  A gentler touch
would have been more realistic and served their purposes as well.
They basically nuked a mosquito.

I still found much to enjoy in this graphic novel.  The heroes of
the piece - a teenage boy, his single mother, a librarian - are all
admirable.  I share common cause with their defense of these and
similar books.  They had me from the start.

The graphic novel flows well with several moments of honest-to-gosh
human drama.  It likewise had me from the get-go and only lost me,
though never completely, when Reed and Hill launched into their
caricature mode.

Americus is definitely worth reading.  It won’t convince anyone of
the nobility of its position who wasn’t already on the same page.
But, save for what I’ve discussed here, I enjoyed the graphic novel
and would happily read more by these creators. 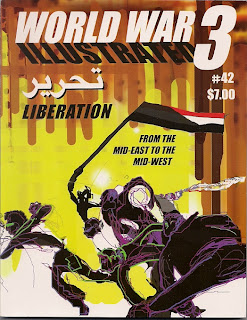 World War 3 Illustrated [$7] is an anthology of social commentary
by some of the world’s most intriguing comics creators.  Issue #42
is the current issue and the theme of its 16 pages is “Liberation
from the Mid-East to the Mid-West.”  Editors Seth Tobocman, Ethan
Heitner and Jordan Worley have gathered dozens of illustrations and
stories in an informative, thought-provoking book.  While the left-
wing political focus of the magazine might turn away some readers
- their loss - the stunning power of these works offer equal parts
dread and hope for the future.

Though not yet successful, the Wisconsin revolt against the anti-
worker policies of that state’s governor is the subject of several
pieces.  The best of these was The Cheesehead Rebellion of 2011" by
Kathy Wilkes and Mike Konopacki with art by Konopacki and photos by
Emily Mills.

Other subjects discussed and portrayed in this issue include the
revolution in Egypt, Facebook as both a force for change and a tool
of repressive governments, the destruction of the Egyptian town of
Gurna to benefit corporate tourism, the nuclear disaster in Japan,
charter schools, and more.  Among the most powerful pieces are an
interview with revolutionary cartoonist Ahmed Nady, the story of an
artist who enters the boxing ring to exorcize the violence he has
known all his life, and mini-biography of Frederick Douglass, the
American slave who escaped to become a legendary social reformer.
A fun fact: When Douglass was 16, he was sent to the plantation of
a professional “Negro-breaker.”  That plantation is now the summer
home of former Defense Secretary Donald Rumsfeld.

World War 3 Illustrated #42 is mostly black-and-white with several
pages of color.  It is a stunning achievement of cutting-edge comic
art and commentary.  I recommend it to all. 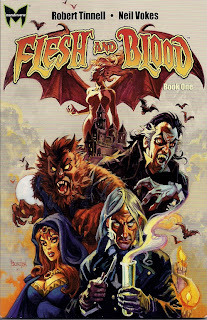 Devotees of classic movie monsters and Hammer Films in particular
will get a kick out of Flesh and Blood Book One by Robert Tinnell
and Neal Vokes [Monsterverse; $14.99].  In the spirit of Hammer and
European studios of the 1960s and 1970s without merely aping them,
the initial installment of Flesh and Blood brings together a host
of legendary characters from such films: Abraham Van Helsing, Baron
Frankenstein, Dracula, and the seductive Carmilla.  Not to mention
a monster hunter with a dark secret and star-crossed lovers caught
in a web of horror.  Tinnell’s writing is strong and to the point,
Vokes’ art and storytelling even more so.  They should be the “go
to” team for any publisher who wants to do great monster comics in
the classic tradition.  My only complaint is that Book Two hasn’t
come out yet.

Book One also includes an introduction by Video Watchdog editor Tim
Lucas; a cool historical article by Bruce G. Hallenbeck, author of
The Hammer Vampire; a Vokes sketch gallery; a gallery of pieces by
several artists; and the four-page opening chapter of “Operation:
Satan,” a tribute to the Quatermass movies by Tinnell and artist
Bob Hall.  The last isn’t long enough to be effective, but it did
leave me wanting more.

Buy this book.  Then you can suffer alongside me until the second
volume is published. 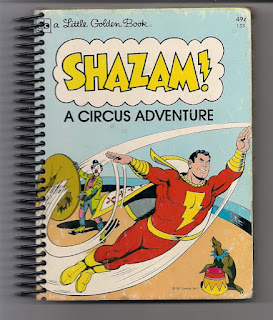 I received a really different gift from one of my readers.  It’s a
Golden Press edition of Shazam! A Circus Adventure [1977] and, yet,
it isn’t.  It’s a journal from Ex Libris Anonymous.  I’ll let the
maker explain it to you:

Not unlike a snowflake, a soft puppy, or a slice of warm pie, every
journal we make here at Ex Libris Anonymous is a one-of-a-kind,
unique, and completely unrepeatable experience.  We use the most
interesting recycled books we can find and salvage the covers and
selected pages of the lucky book, adding around 75 pages of acid-
free paper, perfect for journaling or sketching.  We hope you love
it. Thanks.

This Little Golden Book was written by Bob Ottum and illustrated by
comics legend Kurt Schaffenberger.  The reconstruction is very nice
and, as I look at all those sweet blank pages, I wonder if there’s
someway to fill that would make this special book even more so and
then auction it off for a good cause.  I have a few ideas kicking
around my brain, but I’m open to suggestions.

The Ex Libris Anonymous website is a little difficult to navigate,
but the going price for one of these journals seems to be $14.  If
you buy five, you get a sixth free.  This unusual gift delighted me
and it might well delight friends and family members.  It’s worth
looking into.