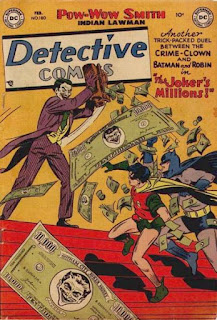 ﻿Detective Comics #180 [February 1952] had a terrific cover by Win
Mortimer and promised readers “another trick-packed duel between
the Crime-Clown and Batman and Robin.”  The 12-page story was drawn
by Dick Sprang and Charles Paris with David Vern identified as its
writer by comics fan and historian Martin O'Hearn.

Veteran readers of my blogs know I have no love for the Joker as he
currently appears in comics.  He’s become an overused caricature,
racking up such large body counts with each appearance that I think it
should be a moral imperative for Batman and/or the authorities to
kill him deader than dead.  I’d put a bullet in the Joker’s brain,
smash his head like an overripe pumpkin, throw those pieces and the
rest of him into a wood chipper, and then dump those tiny bits into
the Mariana Trench.  If there’s a lesson to be learned from all of
those too many modern-era Joker stories, it’s that the Joker will
always escape from Arkham and will always kill many people before
he’s recaptured.  Killing him is simple self-defense.  Killing him
as thoroughly as I’ve described is just for fun.

Oddly enough, when I saw this cover, my first reaction was that I
would like to read that story.  According to the GCD, it has only
been reprinted in Batman Vs. the Joker [Signet Books, 1966].  I’m
sure I had that paperback book at one time, but I’m not sure I ever
read it.  The format was a little awkward for enjoyable reading of
comics, though I didn’t find it so when I read EC horror and sci-fi
stories in said format.

Too much of anything can get boring, but I sort of miss the Joker
of old.  He was only truly murderous early in his career and then
mellowed out, much as did Batman.  The occasional Batman-Joker war
of wits was entertaining.  They weren’t among my favorite stories,
but they were enjoyable nonetheless.

Impossible But True, which was eventually renamed “Roy Raymond, TV
Detective” to emphasize its star.  Ruben Moreira was the artist of
this and all other stories in the series.

Gag cartoonist Henry Boltinoff is represented by Little Pete, Peg,
and Casey the Cop, three pages in all.

There were a lot of comic books published in December 1951, which,
as we all know, is the month of my birth.  I’ll write about more of
them in future bloggy things.

Charles Schulz’s Peanuts has been one of my favorite comic strips
since I discovered it as a kid.  So I was cautiously delighted when
I heard Kaboom! - a division of Boom Enterprises - would be doing
Peanuts comic books with original material.  I’ve now read the zero
issue [$1] and the first issue [$3.99] of the series.

The new stories are pleasant enough, but, compared to the reprints
of actual Peanuts strips by Schulz, they don’t measure up.  The one
I liked best was “Carnival of the Animals” by Ron Zorman and that
was credited as an adaptation.  If “pleasant” were priced at a buck
cheaper, I’d probably be more enthusiastic about these comic books.
But, at four bucks a pop, readers would be better off saving their
money and buying the Fantagraphics collections of the old strips.

Competing with Schulz is a daunting and maybe impossible quest, so
I have nothing but respect for the creators attempting to do that.
But, so far, the comic book isn’t working for me.  Your mileage may
and I hope does vary.  I think Peanuts comic books in the current
marketplace are a good thing.

“Divided We Stand” was the 2008 X-Men event that followed “Messiah
Complex.”  For the most part, each of the titles included in this
event featured complete story arcs that didn’t cross over with the
other titles.  I read these issues, save for those not purchased by
the generous friend who loans me his comics and lets me keep them
for years at a time.  I’ve requested the pertinent Cable and Young
X-Men trade paperbacks from my library system.  I’ll review those
if anything in them sparks my interest.

Uncanny X-Men #495-499 were written by Ed Brubaker with art by Mike
Choi.  The X-Men have allegedly disbanded.  Cyclops and Emma Frost
vacation in the Savage Land.  Wolverine, Nightcrawler, and Colossus
go to Russia.  The Angel goes to a San Francisco that seems to be
re-experiencing the Summer of Love.  These were fun comics, which
is more than I usually get from current Marvel (or DC) super-hero
comics.  Groovy.

Wolverine #62-63 has Logan hunting down Mystique for betraying the
X-Men for the fourth or fifth time.  Writer Jason Aaron reminds us
of that several times while revealing some of the past the enemies
share and, frankly, it makes Wolverine’s anger unconvincing.  The
ending of the arc is equally unsatisfying, just another maintaining
of the status quo.  But you gotta love the Ron Garney art.  I know
I did.

Writer Peter David used X-Factor #28-32 to return to plot threads
from previous tales and move the characters into something of a new
direction.  Even those it’s been years since these comics hit the
comics shops, I’m going to refrain from any spoilers.  If you have
not read David’s X-Factor, you should.  I’m enjoying it more than
any of the other X-titles from these years.

X-Force #1-6 and X-Men Legacy #208-214 were tedious, notable only
for a host of equally tedious villains being raised from the dead
and for Cyclops turning into one of the biggest dicks in the Marvel
Universe.  Really lousy comic books.

X-Men: Divided We Stand #1 and #2 featured several short stories of
various X-Men characters.  As is the way of such anthologies, there
were good stories and less-than-good stories, though none of them
were less than readable.  The best of the bunch were stories with
Cannonball (Mike Carey with art by Brandon Peterson), Nightcrawler
(Matt Fraction with Jamie McKelvie), and, from the second issue,
the Beast (Carey with Scot Eaton and Andrew Hennessy).

Marvel-wise, I’m currently reading more X-Factor and the “Manifest
Destiny” crossover.  I’m also reading other Marvel titles as well
as some from DC and other publishers.  You can expect a whole lot
of reviews this week.