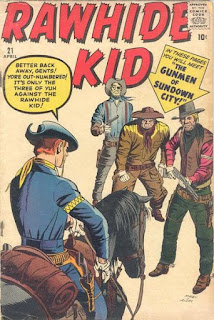 Rawhide Kid #21 [April 1961] is a departure from previous issues of
the title.  Instead of two or three Rawhide Kid stories, we get one
19-page adventure, albeit split into four chapters.

The Jack Kirby/Dick Ayers cover is also something of a departure in
that we barely see anything of Rawhide’s face.  Though he and his
horse are the largest images on the cover, a copy arrow directs the
potential customer’s eye to Grizzly Younger and two members of the
outlaw’s gang.  Within the story, we learn Grizzly and his gunmen
were pals with Blackjack Borden, who the Rawhide Kid fought in the
previous issue.  It’s an unexpected bit of continuity that elevates
this story to a part of a larger saga.

“The Gunmen of Sundown City” by Stan Lee, Kirby, and Ayers is one
of the best of the early Rawhide Kid thrillers.  It’s filled with
surprises.  We’ve seen the Kid draw and shoot his guns faster than
an opponent with weapons already drawn on a couple occasions.  That
doesn’t happen in the first chapter of this tale.  Instead, an old
marshal shoots the guns out of the Kid’s hands and takes Rawhide
prisoner.  On the road, the Kid makes his escape and, during this
escape, the marshal is injured.  The luckless lawman is then taken
captive by Grizzly and his gang.

When Rawhide reaches Sundown City, he finds it under the control of
Grizzly.  He takes out Younger’s men in action-packed Kirby style,
but Grizzly gets the drop on him.  The Kid agrees to join the gang
to save his life.  His first assignment: shoot the bound marshal in
cold blood.  Well, we all know that’s not gonna happen.

Another great fight erupts.  The Kid defeats the owlhoots, but gets
shot in the shoulder.  Rawhide expects the marshal to take him in,
but the lawman decides to retire on the spot.  If he’s not the law,
he doesn’t have to arrest the Kid.

“The West is a big place, Kid...and I reckon some day you’ll find
the justice yore lookin’ for!  You’re no more badman than I am.  So
ride off, son...it’s getting late, and there’s a long trail ahead.”

“The Gunslinger” was this issue’s non-series story.  Stan Lee wrote
it and Don Heck drew it.

Cattle rustler Grimes shoots cattle rancher Seth Brown because the
latter is trying to prove Grimes is the rustler.  The town sheriff,
unable to prove any of the above, tells Grimes that he best beware
of Bat Brown, the wounded rancher’s brother.  The sheriff says Bat
is “supposed to be the most dangerous gun in the state.”

Refused protection by the sheriff - “I’ll do my duty, Grimes! If he
shoots you, I’ll arrest him!” - Grimes hires gunmen to take care of
Bat.  But when he meets a gunman named Flash, who says he beat the
fastest gun in the territory, Grimes fires his hired killers.  All
he needs is Flash.  Big mistake.

You see..."Flash" is actually Bat Brown.  The terrified Grimes backs
away from Bat and right off a cliff.

The twist? The sheriff and the rancher’s brother were just messing
with the rustler’s head.  Bat admits he is “just about the slowest
gun in these parts” and is happy to go back to his regular job as
a schoolteacher.

Yes, you and I can think of several ways in which this plan could
have gone horribly wrong.  But I tend to be charitable towards the
comics of my youth.