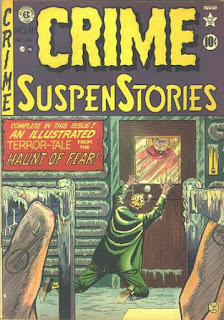 ﻿Crime comics were still a big part of the comics market in December
1951, my birth month.  However, along with horror comics, the crime
comics would become the poster children for the anti-comics forces
already massing.

When the Comics Code was adopted in October 1954, the first part of
its “Code for Editorial Matter” was devoted to crime comics.  The
dozen rules, especially the last two, made it virtually impossible
for crime comics to continue as they had.

Restraint in the use of the word "crime" in titles or sub-titles
shall be exercised.

No such restraints were in place in December 1951.  Here are three
issues that hit the newsstands that month.

Craig is my favorite EC creator.  His contribution to this issue is
“Out of the Frying Pan...,” a brilliantly understated tale.  Craig
both wrote and drew most of his EC efforts and he can’t be beat for
sheer storytelling.  Everything is always in service of the story
at hand.  In this one, a friendly old man in a hospital bed cheers
up his paralyzed roommates with his vivid descriptions of the world
outside their window.  Their newest roommate is a temporarily blind
murderer who will soon be taken to prison.  Save for a violent page
showing the murder, the story unfolds at a downright leisurely pace
and so heightens the shock of his surprise ending.  I laughed out
loud when I first read the story and it still makes me smile every
time I reread it.

Author Max Allan Collins cites an anecdote from Bennett Cerf’s Try
and Stop Me as the springboard for “Out of the Frying Pan.”  The
book was a favorite of EC Comics publisher William F. Gaines, who,
with editor Al Feldstein, often came up with plots for their comic
books and, it must be said, sometimes appropriated those plots from
existing works.

“A Trace of Murder” by Feldstein with artist Jack Kamen is typical
of EC’s many “spouse kills spouse” stories.  Inspired by a murder-
suicide, a husband plans to get rid of his wealthy older wife with
an untraceable poison.  It takes some wild plotting gymnastics to
get to the surprise ending with those gymnastics started by a pair
of young sociopaths, another EC tradition.

Feldstein teams with George Roussos for “The Escaped Maniac,” and,
while Roussos’ work is wonderfully unnerving, you can see the twist
ending coming a mile away.

EC’s horror comics were obviously considered a draw.  “Partnership
Dissolved” by Feldstein and Ingles was proclaimed “an illustrated
terror-tale from the Haunt of Fear” on the cover.  While the meat
wholesaling angle lends itself to a gleefully gory last panel, the
story itself is so-so by the high standards of EC, an outfit that
raised the bar for all crime and horror comics. 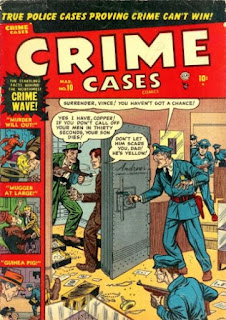 Crime Cases Comics #10 [March 1952] has one of those busy, packed-
to-the-corners covers found on many of Marvel’s non-humor titles in
the early 1950s.  Alas, the artist of this particular cover has yet
to be identified.  Inside the issue:

“Crime Wave” is said to be “an actual crime case,” but I’m somewhat
skeptical of that claim.  The seven-page story is drawn and signed
by Tony DiPreta.

The same claim is made for “The Guinea Pig.” The six-page story is
drawn and signed by Jack Keller, best known for Marvel’s Kid Colt
Outlaw and Charlton’s hot rod comics.

The artist for “Murder Will Out” is unknown, but “Mugger At Large”
was drawn by Warren Sitton.  Both of these five pages are said to
be actual crime cases.  What’s the world of 1951 coming to when I
can’t trust what I read in comic books? 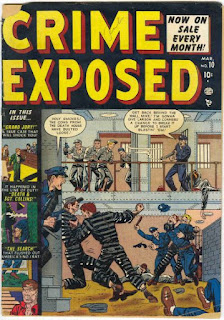 A dozen convicts and guards were squeezed into the cover of Crime
Exposed #10 [Marvel; March 1952], an even more impressive feat of
artistic engineering when one also considers the multiple panels on
the left side of the cover.  We don’t know who drew this cover, but
he definitely earned his paycheck.

Warren Sitton and Jack Keller also have stories in this issue.  The
former drew “Grand Jury” (6 pages) and the latter did the honors on
“Death and Sgt. Collins” (7 pages).

The multi-talented Sol Brodsky, one of my first bosses at Marvel,
drew “Escaped Con” (6 pages).  One of my true regrets about those
early days is that I didn’t stay in Sol’s department much longer.
I learned a lot from him and could have learned a lot more.  He was
a good guy.  Rounding out the issue was “The Search,” a four-page
story drawn by Vernon Henkel.

More covers from my birth month to come.

This week’s Doonesbury strips concern women’s reproductive rights.
The Akron Beacon Journal will run reprints, another example of how
far to the right that once just slightly right of center newspaper
has become.  Then again, the ABJ has been little more than a shadow
for years, having fired or lost its best columnists.

The [Cleveland] Plain Dealer will be running the Doonesbury strips.
This surprised me because the PD has long been a right-wing tool of
the rich and the powerful.  If I had Mitt Romney’s $10,000, I’d bet
it on the Doonesbury strips being the subject of a slanted column
from Kevin O’Brien, the newspaper’s resident hater of all things
“liberal.” I’d also make a side bet on angry subscribers commenting
on the strips in the letters section by Tuesday.

Once the Doonesbury sequence has run in its entirety, I’ll get back
to you with my thoughts on the strips and the reaction to them in
the Plain Dealer.  Meanwhile, how many of you are hoping for Mary
Worth to lose her cool and punch that soulless neighbor of hers in
the face?  Or, on a less violent note, inform the woman’s employer
that said nasty piece of work framed a former employer for theft so
that she could get his job?