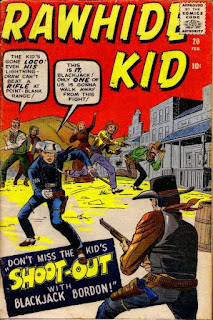 The Rawhide Kid #20 [February 1961] is one of my favorite issues of
the series.  The 13-page “Shoot-Out With Blackjack Bordon” by Stan
Lee, Jack Kirby, and Dick Ayers shows the Kid’s youthful naivety as
he is tricked by a bogus marshal into believing he’s been given a
full pardon by the Governor.  The only condition Rawhide must meet
is to put aside his guns forever...and it’s a condition to which he
readily agrees.

The plot is set in motion by Blackjack Bordon who, in the absence
of the Kid’s ability to defend a western town, takes over the town.
The splash page of the second chapter of this adventure is a great
shot of Bordon towering over the Kid.  Kirby excels at drawing the
5'4" cowboy; other artists didn’t capture that as well.

Frustrated by his inability to stop Bordon, the Kid leaves the town
to avoid losing his “parole.”  That resolve vanishes with a chance
encounter with the bogus marshal, who has also been driven out of
the town by Bordon lest he give away the plan. You can figure out
what happens next.

The shoot-out ends with two fairly common story elements.  The Kid
shoots faster than Bordon even though Bordon already had his rifle
in his hands and shoots Bordon in the hand.  A bystander exclaims that
“Bordon will never be able to use that gun hand again!”

“Return of the Gunfighter” is one of the five-page non-series stories that
ran in every issue of The Rawhide Kid.  Written by Lee with art by the
great Don Heck, it’s the tale of feared gunman Ten-Notch Norton who
is returning to the town where he had his last gunfight.  Norton is
challenged by a guy wanting to prove he’s faster than Norton, but
the Ten-Notch wants nothing more to do with that kind of violence.
Even when Norton admits he’s scared, his opponent won’t let it go.
He’s determined to have his gunfight.

The twist ending is not that Norton easily beats the man.  It’s the
reason why he was afraid to fight him.  He was afraid he would kill
the man.  Since that last gunfight three years ago, Norton has been
blind.  He had to shoot by the sound of his foe’s voice.

The twist ending doesn’t come out of nowhere.  Looking back at the
second and third pages of the story, there are subtle clues as to
Norton’s condition.  A great little tale.

“The Defeat of the Rawhide Kid” by Lee, Kirby, and Ayers ends this
issue.  An exhausted Rawhide passes out at the deserted ranch of a
father and his young son.  The son recognizes him and says he wants
to join the Kid and become a famous badman.  Knowing this could be
a turning point for the youngster, the Kid pretends to be good with
this idea.  But, he adds, they can’t leave the father alive to tell
the law the Rawhide Kid was there.  When the youngster objects, the
Kid knocks him to the floor and the father goes after Rawhide with
his bare hands.

We’ve seen this story before.  The Kid feigns being a badman or a
coward to keep someone from making the same kind of mistake he once
made.  The father sees through this, but plays along with the Kid
for the sake of the boy.

As the Kid flees into the full-mooned night, the father things to
himself:

And I hope you grow up to be nearly the man the Rawhide Kid is!  I
know what he did - and why he did it - and I’ll never forget him!
Thank you, Kid - and vaya con dios!

Stan gets the last word in a bottom-of-the-panel caption:

Some day the boy would be told, some day he would learn than it
sometimes takes far more courage to lose an battle than to win
one...the kind of courage that only someone like the Rawhide Kid
could possess!

Yeah, that’s the ticket.  All those times I had to fight bullies in
school and got the shit kicked out of me?  I was being courageous.
That’s my story and I’m sticking to it!