A SATURDAY STROLL THROUGH MY MIND 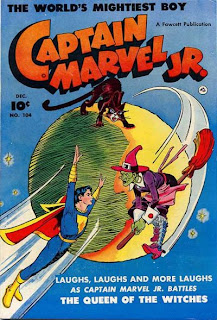 ﻿It’s “laughs, laughs and more laughs as Captain Marvel Jr. battles
the queen of the witches” in Captain Marvel Jr. #104, cover-dated
December, 1951, which also happens to be the month of my birth and,
yes, I am getting tired of repeating that fact.  I do so in case we
have a new bloggy thing reader joining us today.  And we do seem to
be getting new readers on a nigh-daily basis.

“The Queen of the Witches” is one of three Captain Marvel Jr tales
in this issue, all of them drawn by Bud Thompson.  The others are
“The Magic Milk Mystery” and “The Palace of Lost Ideas.”  I really
like that last title.  Sounds like a story that could have appeared
in one of Neil Gaiman’s Sandman issues.

The back-up stories are “Kanvasback” (sports) and “Brown and Green”
(humor).  I’m not familiar with either feature, but, thanks to Roy
Thomas I now know something about the “Captain Kid” character who
was mentioned in Thursday’s bloggy thing.  Roy writes:

“Captain Kid was a teenager in a filler...except that he wore an
odd little quasi-costume and cape, just to look like a super-hero,
I guess.  Well, it got me to read his mini-adventures.”

Roy’s comment about the quasi-costume getting him to read “Captain
Kid” raised another question in my mind.  Save for text stories, I
would read everything in a comic book when I was younger.  Even if
the secondary features weren’t very good, I liked the variety they
added to the comic.  To this day, I still enjoy anthology titles.
Getting back to my question:

Do you read everything in the old or new comic books you purchase?
If not, what features do you usually skip?

I have been writing “Tony’s Tips” in Comics Buyer’s Guide for what
must be over two decades by now.  I wrote “Tony’s Online Tips” for
well over a decade.  I was a blogger before anyone was calling what
I did blogging.  From the start of those columns, the mere fact of
my writing them was disturbing to some industry folks.

When I decided to resume blogging, after posting blogs on my Tony
Isabella message board for a few months, I made the very conscious
decision to never worry about those industry folks.  For the most
part, my career in comic books seemed to be over then and may well
be over now.  At the very least, I am woefully underemployment in
my preferred field of endeavor.

This sad-to-me situation amuses some online louts greatly.  Never
mind that these louts have never written and published a book or a
comic book.  Never mind that at least one of them is quite rightly
reviled as one of the most vile people in comics.  They take great
delight in my supposed misery.

Even at my most depressed, I have only to look around and to know
with absolute certainty that I have a better life than these jerks.
I have a beautiful, loving, and wondrously capable wife who keeps
winning awards in her field.  We have raised two amazing children.
I have friends, including many of the people whose comics and other
work inspired me as a young man.  While universal respect in this
nutty comics industry may elude me, I have respect sufficient for
me to look at myself and say “You’re alright, kid.”

When I resumed blogging, I also made the decision to be as honest
as possible, which is why I’ve opened as many doors into my life as
I have.  It’s why I’ve written of my depression, of my unfortunate
choices during my career, and my anger at bad people in the world
and in the comics industry.  But, of late, I’m trying to express my
anger more productively.

The main reason yesterday’s blog was delayed was because I rewrote
a portion of it to remove some accurate but extraneous commentary
on right wing politicians and their acolytes.  Their tactics are so
egregious that it’s a struggle not to lower myself to their level.
That my anger was magnified by the well over a dozen robo-calls I
receive from Republican candidates daily is true, but it does not
excuse my transferring that anger to my bloggy things.  I’m going
to keep working on that.

Naturally, any negative comments I make about the right are going
to be taken badly by those who subscribed to that most peculiar of
philosophies, but that reaction is not something I can control or
even predict.  I mean, for God’s sake, who could have expected that
Rick Santorum would throw up after reading John F. Kennedy’s speech
on the separation of church and state?  Maybe Rick is wearing his
Jim Tresell sweater-vest too tight.

On the subject of those damn robo-calls, we have gotten a few from
the Democrats this week.  My rough estimate is that for every one
we get from the Democrats, we get ten from Republicans or their Tea
Party masters.  I know these robo-calls are relatively cheap, but,
given how many we’re getting, the right is spending serious cash to
annoy me.  When all they really have to do to annoy me is just be
themselves.

The mail, he said sarcastically, has also been a joy this week.  No
overdue royalty checks from clients, but lots of GOP junk mail for
candidates who don’t have a prayer of getting our votes.  We have
received maybe three pieces of junk mail from Democrats this entire
year to date.  As we get closer to “Super Tuesday,” we receive at
least that much every day from Republicans.  Don’t worry, that mail
gets recycled, much as the GOP keeps recycling its failed ideas and
candidates.  Newt Gingrich?  Really?

This old man is almost done shouting at the clouds today.  We close
with an amusing incident if you laugh at depression as I sometimes
manage to do.

This Thursday past was a really bad day.  I craved comfort food to
lighten my mood.  I hopped in my van and drove to Giorgio’s, which
is my favorite Medina pizza place.  Great pizza for five bucks and
even better salads for three.  Except when I got there, I learned
the place - which I had last patronized maybe a week earlier - was
now out of business.  I think I might have sobbed.

Adding to my misery, I then headed over to Little Caesar’s.  Though
the last pizzas I’d gotten there were pretty bad, I was desperate.
Turns out this place, under new and even crappier management, has
managed to make their pizzas more like cardboard than ever before.
They were also out of their Italian cheese bread, which is the one
menu item they do well.  Groan.

I have been experimenting with the leftover pizza for two days now.
I have added extra different cheeses on it.  I have added cucumber
ranch dressing to it.  These have made the pizza eatable for maybe
two bites and then the cardboard taste comes through.

If this shit finally gets to me and I go on a killing spree, I plan
to use “the pizza defense” at trial.  Until then, I guess I have to
find a new favorite pizza place in Medina.