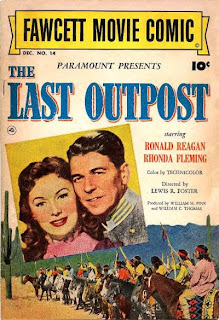 ﻿All I know about Fawcett Movie Comic #14 is that it adapted a 1951
Paramount film starring Ronald Reagan and that it was published in
my birth month of December 1951.  IMDb summarizes the plot of the
movie thus:

Two brothers who are not the best friends because they were
fighting on different sides during the Civil War have to cooperate
in order to defend themselves against an attack of Indians.

The movie also features Rhonda Fleming, Bruce Bennett, Noah Beery
Jr., Hugh Beaumont (Beaver’s dad), and, in an uncredited role, Burt
Mustin.  Leading man Reagan went on to become the President of the
United States and the patron saint of a Republican Party that, were
he alive and running for President now, would likely hate him more
than they hate Mitt Romney. Life’s funny, isn’t it?

The Grand Comics Datebase reports Fawcett Movie Comics was preceded
by seven movie adaptation one-shots, but does not explain why the
ongoing story started with issue #7 instead of issue #8.  The title
would end with issue #20.

The rough patch continues, so I again turned to movies to work my
way through it.  Courtesy of Turner Classic Movies, I viewed three
vintage science fiction slash horror movies: The Magnetic Monster
(1953), X the Unknown (1956), and Die, Monster, Die (1965).  It was
four-and-a-half hours well spent.

Written by Curt Siodmak and Ivan Tors and directed by Siodmak and
Herbert L. Strock, The Magnetic Monster is a surprisingly chilling
film despite its low budget, frequent use of stock footage, and a
tendency towards wooden acting.  A rogue scientist has developed an
artificial radioactive material that absorbs energy and increases
in size.  If the Office of Scientific Investigation (OSI) doesn’t
find some way to destroy this “monster,” it will grow large enough
to destroy the Earth in days.

Richard Carlson and Jean Byron are amazing as Dr. Jeffrey Stewart
and his pregnant wife Connie.  Stewart fusses because he doesn’t
think she is getting fat enough fast enough.  She gives him those
“poor simple man” looks that I know so well from my own 28 years of
marriage.  Their performance is completely convincing.

Without showing a single on-screen death until its closing scenes,
the movie nonetheless conveys a rising sense of urgency and dread.
The frequent through-the-microscope shots of the glowing growing
material are actually kind of scary.  That all of this is conveyed
by the actors and not the mostly non-existent special effects is a
remarkable achievement.

At the end of the film, as the Carlsons prepare to enter the house
they have bought for their growing family, Jeffrey notices Connie
is gaining weight.  Connie replies that she is getting bigger and
bigger.  Jeffrey says something about secrets of multiplication and
when his wife gives him one of those looks and asks him what he’s
talking about, he says:

I'm not sure. Excepting they both seem to have something to do with
multiplication. Done through love, the result is a baby, a... a
lovely thing. But without love, done through hate or... or fear,
the result is a monster, an element that grows.

Roll the eyes and the end credits.

Though The Magnetic Monster drags in places, I liked it.  According
to Wikipedia, it’s the first of three OSI movies and you can bet I
will be looking for the others: Riders to the Stars (1954) and Gog
(also 1954).

Giant radioactive mud emerges from a crevice to absorb energy and
fry anyone luckless enough to get caught in its path.  That’s the
quick summary of X the Unknown.  But the real-life horror of this
Hammer Films production is that it was supposed to be directed by
blacklisted American director Joseph Losey.  However, leading man
Dean Jagger (Dr. Adam Royston) refused to work with a suspected
Communist sympathizer.  Losey was canned and replaced with Leslie
Norman.  I’m glad I didn’t find out Jagger was an asshat before I
watched this movie.  If I had, I would have been rooting for that
mud monster.

X the Unknown was good creepy fun.  The monster looks like a shit-
covered rug, but, since we don’t see if until after several scary
and tragic deaths, it’s effective because we know what it can do.
The ending is a bit confusing - Doc Royston doesn’t quite know why
his plan to destroy the monster worked and no one seems concerned
about that - but I enjoyed the film.

According to the credits of this British film, Die, Monster, Die!
is based on H.P. Lovecraft’s “The Colour out of Space”.  It’s been
many years since I’ve read that story, but there were a few broad
similarities: a meteorite from space with mutagenic properties, a
blighted area around the event, and deformities, illness, madness
and death visited on those closest to the area.

In this version, American scientist Stephen Reinhart (Nick Adams)
encounters fear and hostility from the townspeople near the Witley
estate.  He’s come to see his fiancee Susan Witley (Suzan Farmer),
invited by Susan’s mother who wants him to take her daughter away
as quickly as possible.  Letitia Witley has already been infected
by the meteor’s radiation.

Played by Boris Karloff, Nahum Witley, Susan’s father, is using the
meteor to mutate plant and animal life.  His hope is to bring life
to the area and redeem his family name, a name sullied by the mad
obsessions of his own father.  Needless to say, things aren’t going
as planned.

Adams makes a convincing hero.  Farmer is sexy in a cute 1960s way.
The wheelchair-bound Karloff doesn’t really get into things until
his final scenes when he realizes where his obsessions have taken
him.  The special effects are kind of gooey when it comes to human
beings changed by the meteor’s radiation, kind of dumb when plants
attack Susan, and kind of cool when we get a glimpse of not-quite-
human meteor creatures.

Die, Monster, Die! is a perfectly reasonable movie to pass an hour
and a half with.  It’s not classic - none of these three films can
aspire to that - but it’s entertaining.  I rarely demand more from
movies and that’s working out okay for me.