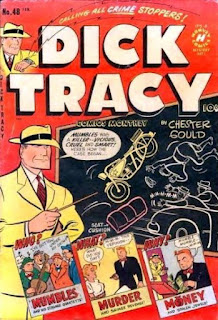 ﻿Dick Tracy #48 hit the newsstands in the month of my birth, which
you all know was December 1951.  It was published by Harvey Comics
and, judging from the cover, it reprinted at least a portion of the
Mumbles storyline from the Dick Tracy newspaper strip.  The strips
were likely cut into panels, edited for content, and reconfigured
to look like a traditional comic-book page.  As always, any bloggy
thing readers who know more about the issue than I do - clearly not
a difficult task - is hereby invited to share their knowledge with
me.  Learning is fun!

I did not give Jack Kirby’s Kamandi a fair shot when “The Last Boy
on Earth” debuted in the fall of 1972.  I wasn’t happy about DC’s
abrupt cancellation of The New Gods and The Forever People and the
departure of Kirby from Jimmy Olsen.  It was too easy (and wrong)
to dismiss the new book as just Kirby’s take on Planet of the Apes.
Then, within a few months of the first issue, I was in New York and
starting my own comics career at Marvel Comics.  Back then, I was
sure (and still am today) that Marvel’s 1970s comic books were, for
the most part, far superior to DC’s 1970s comic books.  But when DC
solicited Kamandi, The Last Boy on Earth by Jack Kirby Volume One
[$49.99], I immediately put it on my Amazon wish list and, when a
friend gave me the book as a Christmas present, I dived right into
some of the wildest stories of the 1970s.

This hardcover book reprints the first 20 issues of Kamandi.  Kirby
was a creative cyclone in these stories.  From the core concept of
some unknown disaster that upended the food chain of planet Earth,
Kirby spun out wonderful twists and turns that are as thrilling to
me in 2012 as if I’d been smart enough to appreciate them in 1972.
Kamandi’s adventures carry him all over what’s left of the United
States and these future glimpses of Chicago, Las Vegas, and even my
native Ohio are huge fun.  These issues are an astonishing blend of
action, human drama, and satire with scenes that tugged at my heart
and bits that made me chuckle out loud.

The book also features an introduction by Mike Royer, my favorite
Kirby inker after Joe Sinnott.  It’s a breezy and informative piece
that adds to our knowledge of comics history.  Of course, it’s also
a reminder that Kamandi never again looked as good as it did when
Royer was on board.

Kamandi, The Last Boy on Earth by Jack Kirby Volume One is a great
collection.  So what if it took me four decades to fully appreciate
the series?

I’m relatively current with Marvel’s Avengers titles, which is to
say I’m probably a month or two behind.  I need to borrow the most
recent issues from my friend who lends them to me.

I enjoyed Avengers #18-21 [$3.99 each] by Brian Michael Bendis with
art by Daniel Acuna (#18-20) and Renato Guedes (#21) more than I’d
anticipated, but I still think Norman Osborn and H.A.M.M.E.R. have
outlived their fifteen minutes by several years.  With Bendis said
to be departing the Avengers franchise, maybe we’ll get some fresh
villains.

Avengers 1959, a five-issue series by Howard Chaykin, was big fun.
Most of the characters have not been overused and it was intriguing
to see them at this stage of their lives.  The issues were priced
at $2.99 each, which makes me wonder why Marvel thinks the above-
reviewed Avengers is worth a buck more per issue.

Christos Gage’s Avengers Academy ($2.99 per issue) is still far and
away the finest of the Avengers titles.  Things happen, characters
mature, and missteps are rare.  I’m delighted to see Tom Grummett
on the pencils as of issue #24, I think he’s a great fit for this
series.

Avengers Solo ($3.99 per issue) is another five-issue series, but
it’s so-so at best.  Neither the Hawkeye lead feature nor the not-
written-by-Gage Avengers Academy back-up is doing anything for me.
Given the number of Avengers comics being pumped out with the hope
of movie-inspired sales, it’s to expected that some of those books
won’t measure up.  Solo is one of those.

The controversial Doonesbury strips about the abortion laws which
recently went into effect in Texas turned out to be a mere blip on
the local radar.  The Akron Beacon Journal, which ran the strips on
its editorial pages and the reruns on the comics page, had nary a
comment on the strips from columnists or readers.

The [Cleveland] Plain Dealer published one reader letter applauding
the paper’s decision to run the strip.  The reader was happy that
there was room for such discussion on the comics page.  There were
only a few online comments to the letter, including the usual one
about anyone supporting choice being a monster and a murderer.  I
think the issues of abortion and choice are far too complicated for
such one-note rancor, but I’m not writing about such things in this
week’s blogs.

Kevin O’Brien, the PD’s resident extreme right-winger, surprised me
by ignoring the strips.  Of course, he was busy defending his idol
Rush Limbaugh and rephrasing the deplorable comments Limbaugh made
into comments only marginally less deplorable.

As controversies go, the Doonesbury strips were barely noticeable.
I thought they were well done and that they made excellent points
in a fairly sharp manner, but they didn’t strike me as anything out
of the ordinary for the strip.

I could get used to such mild controversy.